Giles County, VA – On the border between Virginia and West Virginia, a fight has begun regarding the Mountain Valley Pipeline, a joint venture of several companies led by EQT Midstream Partners. While the pipeline is advertised as on track to be completed in 2018, it faces several dramatic delays; as of this writing, at least eight different tree-sits or other blockades currently obstruct the pipeline’s route on both public and private land.

The 42-inch high pressure pipeline begins in Wetzel County, West Virginia, and would carry fracked natural gas 300 miles from the Marcellus and Utica shale formations to a compressor station in Pittsylvania County, Virginia. Additional proposed work would then continue MVP’s route for another 70 miles, crossing into North Carolina.

Natural gas is highly explosive, and recent pipeline explosions in Kentucky and Pennsylvania have caused serious injuries and destroyed several homes. Those living along MVP’s proposed route say they worry the pipeline puts their homes and families at the center of a potential blast radius.

The project’s projected “in-service date” is the fourth quarter of 2018.

On a US Forest Service road that connects to the Appalachian Trail, an anonymous forest defender in a monopod (a structure on top a single pole suspended via anchor wires tied to nearby trees) is obstructing the passage of vehicles. Further up the road, two additional tree sits on the West Virginia side of the mountain are preventing work on the site slated to host the drill pad to bring the pipeline through the mountain.

The occupant of the monopod, who uses the pseudonym ‘Nutty’, has been living in the structure for over three weeks as of this writing. For several weeks now, police officers from the US Forest Service have been preventing food and water from being delivered to Nutty’s monopod, arresting several people who have attempted to re-supply her.

Forest Service supervisor Joby Timm has claimed that “the Monopod occupant is not being denied food or water and can leave the closure area at any time.” This statement conflicts with accounts given by numerous protesters and clergy, who have been arrested or threatened with arrest for attempting to re-supply “Nutty” with food and water.

Earlier this month, a pipeline security contractor had one of Nutty’s supporters arrested after going to a local magistrate to file a warrant for reckless driving. Protesters we spoke with insisted this arrest was a trumped-up effort to intimidate, as the pipeline employee had previously asked police to make the same reckless driving arrest, which police had declined to do. Three additional arrests took place on Sunday, April 22 during another attempt to deliver food and water to the monopod occupant.

Forest Service police are enforcing a closure of the road, under threat of arrest, to everyone except pipeline workers and law enforcement. The Forest Service first closed the public road and told those in the area they would be enforcing a 50-foot ‘closure zone’ around the road, which they later widened to 125 feet.

Pipeline opponents recently defeated the company’s legal attempt to end their direct action campaign when a judge declined to grant MVP a preliminary injunction against people living in trees in the pipeline’s path. The judge’s decision cited repeated inaccuracies in maps and plans created by surveying contractors.

On April 18, private security personnel arrived and set up camp in the area of the tree-sits further up Peters Mountain in Jefferson National Forest, which can be accessed by foot or ATVs (but not larger vehicles which can’t drive around the monopod without hitting it.) As of this writing, both the two tree-sits and the monopod blockade on Peters Mountain are still in place.

Several dozen miles away in Roanoke County, VA, another tree-sit blockade of MVP is entering its fourth week. 61-year-old Theresa ‘Red’ Terry, along with her daughter Theresa Minor Terry, has set up a tree sit on her property in the path of clear-cuts on the pipeline easement. The two have been blocking MVP’s route through their family’s land since April 2, surrounded by a 24/7 police presence that is preventing their friends, family, and supporters from providing them with supplies.

Support for their tree-sit has grown in their area, with local restaurants providing food to their supporters who are camped nearby. For many, ‘Stand with Red’ has become a rallying cry representing solidarity with their neighbors against the Mountain Valley Pipeline.

County officials have made statements denying they are withholding food or water from Red or her daughter; a recent statement by Ronoke County public information officer Amy Whittaker claimed that all necessary supplies were being made available to the tree sitters. A recent examination of Whittaker’s claims by the Washington Post, however, laid bare the contradictions inherent in this claim:

They haven’t denied the women food and water, Whittaker said; it’s available at the base of the trees if they want to come down and get it.

If they come down, though, they’ll be arrested.”

On Wednesday, April 18, a judge in Roanoke County issued a warrant for the arrest of ‘Red’ and Theresa Minor Terry for the crime of occupying trees on their own property, where MVP had obtained an easement through eminent domain.

A statement by Roanoke County confirmed that their police department was seeking to arrest the Terrys for “actively delaying, obstructing, and interfering with the use of the easement by MVP.”

Another new obstacle to MVP’s plans suddenly emerged on April 19, when farmers Ian and Carolyn Reilly announced the creation of three new tree-sits in their family’s cattle pasture in Franklin County, VA. The protest blockade, named Little Teel Crossing in honor of a nearby stream, occupies trees where the pipeline is planned to cut through the Reilly’s farmland.

“This is about taking a stand,” Ian Reilly told The Roanoke Times. “This is about choosing for ourselves when the fight is over. MVP thought we would just resign when pipeline tree clearing began. But the fight has just begun and we still believe we can stop this destructive project.” Lawyers for Mountain Valley Pipeline responded last Friday by submitting a motion in US District Court in Roanoke, asking US Marshals be sent immediately to arrest the Reillys.

Landowners along the route have repeatedly told off surveyors and land agents appearing on their property without their consent, only to have them show up again. A Virginia law allows natural gas companies unrestricted access to private property, granting pipeline contractors virtual immunity to steamroll over objections from residents along the route. MVP has forced over 300 landowners into court proceedings so that it can seize portions of their land under eminent domain.

On February 9, 2018, a judge ruled against a legal challenge by landowners in favor of pipeline surveyors seeking access to private land. Landowners have reported that pipeline survey crews seem to have a way of knowing when residents aren’t home, and try to time their visits accordingly. Some say they have received calls from their neighbors to report strange men seen walking on their land when their neighbors knew they weren’t home.

County officials along the route have also expressed dismay at MVP’s tactic of using federal condemnation orders to gain rights to access property, and then beginning work without seeking permission from affected residents, or even notifying them.

On October 13, 2017, the Federal Energy Regulation Commission (FERC) issued MVP a required ‘Certificate of Public Convenience and Necessity’ for the project. The FERC approval then served as the legal basis by which Mountain Valley Pipeline has gotten  judges to approve eminent domain claims against local landowners.

State permits were also eventually granted by Virginia and West Virginia’s environmental regulators, although Virginia officials have recently toughened their rhetoric around the pipeline in an apparent response to public opinion. Virginia’s Water Control Board recently announced a new 30-day public comment period to discuss concerns with waterways set to be crossed by MVP.

Blasting and drilling operations planned as part of pipeline construction are expected to damage karst limestone formations, which are a sensitive and a key part of local groundwater systems. Destruction of karst has been linked to sinkholes, landslides, and contamination of nearby wells.

Other environmental and regulatory issues have also arisen as a result of tree-clearing along the pipeline route, although regulators and the pipeline company both seem unconcerned. In court proceedings seeking an injunction to remove the tree-sitters in Jefferson National Forest, MVP officials complained that they needed to finish tree-clearing by March 31 in order to avoid damaging bat habitats. However, locals have reported that pipeline crews have continued cutting in the same area well past the deadline. Mountain Valley Pipeline responded to these claims by insisting that the habitat regulations did not actually apply to the trees in the areas where they had been granted easements. FERC has since accommodated MVP by announcing they now have until May 31 to finish cutting trees.

Weekly status updates submitted to FERC by MVP have admitted the existence of at least 37 “problem area reports” regarding potential violations of construction regulations. FERC inspectors have also discovered loggers employed by MVP cutting down trees outside of the boundaries of their permitted construction areas. The Virginia Department of Environmental Quality has received at least a dozen complaints about tree-cutting by MVP crews.

While these facts have met with disapproval from residents and county and state politicians, they seem to have little relevance in the ongoing construction process. A recent statement by Mountain Valley Pipeline attempted to minimize any environmental violations and downplay any threat posed to MVP by protests and blockades.

Mountain Valley Pipeline (MVP) is pleased to report 100% completion of all tree-felling activities requiring time-of-year restrictions related to endangered bats. In addition, tree felling in the Jefferson National Forest is 99.4% complete, with the outstanding portion being the approximately 140 feet that remains occupied by project opponents. As this is such a minute portion of MVP’s 303-mile route, the disruption created by opponents has not changed the overall outcome of the project, which remains on target for a late 2018 in-service.”

On Wednesday April 18, a group of state lawmakers called on Virginia’s Democratic Governor Ralph Northam to pause the pipeline project to allow additional reviews, chastising state agencies for green-lighting MVP despite repeated violations. They also criticized FERC for giving federal approvals to the pipeline, calling MVP “an unnecessary project approved by the federal government on a partisan line.” Politicians at the event also described law enforcement tactics of denying food and water to tree-sitters as “outrageous” and “inhumane.” It is unclear what impact, if any, these statements will have on ongoing police operations to force the completion of the Mountain Valley Pipeline.

On the Forest Service access road leading up Peters Mountain to where trees still stand on the MVP easement, Nutty’s monopod blockade is still in place after almost a month. A banner hanging from her small domicile atop a massive wooden pole reads “the Fire is Catching – No Pipelines.” New tree-sits continue to pop up along the pipeline’s route. With these new ‘fires’ catching, and pipeline executives and law enforcement looking for ways to put them out, it seems certain that the Mountain Valley Pipeline will not be built without a fight. 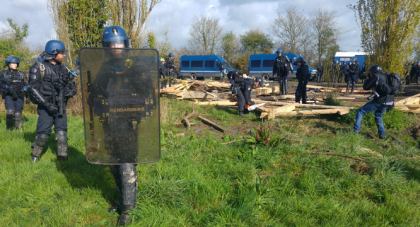 Deadline Days Away in the ZAD After Weekend of Defiant Rebuilding