Kansas City, MO – Leaked videos, posted to a private internal Facebook page for the Missouri state chapter of the far-right ‘western chauvinist’ Proud Boys, which many consider to be a white supremacist fight club, show details of how the group operates on a local level.

Several of the leaked internal videos feature Aaron Ward, who took over leadership of the Missouri state chapter from David Grant on April 6, 2018.

One video shared by Ward to members of his chapter seemed to parrot comments frequently made by Proud Boys founder Gavin McInnes, which encourages violence against political opponents while couching it in the language of self-defense:

“Proud Boys don’t start fights, we end them. So, don’t be the first guy to throw the punch, but you know, if anything goes down, fucking end that shit.” – Aaron Ward

Ward also used the internal state chapter’s Facebook page to post pictures of his guns, emblazoned with one of the group’s ‘western chauvinist’ slogans, “the west is the best.”

Aaron Ward shared a racist message comparing Valerie Jarett, former advisor and assistant to Barack Obama and a woman of color, to an ape, in an apparent imitation of a similar racist meme that had been posted by disgraced racist TV star Roseanne Barr. Directions issued by Ward to the group, mostly in the form of cell phone videos he made of himself talking while driving, often involve the Proud Boys inserting themselves into other group’s events. Missouri Proud Boys apparently focused on making an appearance at various 2nd Amendment rallies in order to confront liberal groups and befriend conservatives. Ward also encourages Proud Boys to attend Veterans of Foreign Wars (VFW) cookouts in order to gain support from veterans.

On May 11, 2018 the Proud Boys held a get-together at a VFW property in Kansas City, from which some of them drunkenly livestreamed themselves. Another video shows Hunter MacPherson, a member of the Missouri chapter, loading his assault rifle and joking about wanting to shoot and kill “antifa.”

One of the initiation pledge videos from the private Missouri Proud Boys page shows a “first degree” pledge to join the group that was made by Tyr Richter, a neo-nazi involved in the American Guard, a far-right paramilitary group whose members were present at ‘Unite The Right’ in Charlottesville.

Some photos posted by Richter on Facebook show him wearing a shirt that says ‘President,’ suggesting that the Missouri Proud Boys member is also involved in the leadership of American Guard. American Guard has extensive connections with former Ku Klux Klan members and neo-nazi skinhead gangs such as the Hammerskins.

The Proud Boys exposed in the Missouri Facebook leak are just one group of several chapters across the country, each of which recruit and organize their internal business using Facebook pages. The official Proud Boys website lists 22 different “vetting groups and portals,” all of which are hosted on Facebook. The Proud Boys have experienced a surge in recruiting efforts since their recent street violence at a ‘Patriot Prayer’ rally in Portland has been celebrated and promoted by conspiracy theory profiteer Alex Jones, who has been encouraging his audience to join them.

Downloadable .zip of Missouri Proud Boys videos and some images from Facebook (totalling 583.3 MB) are available from Unicorn Riot below. 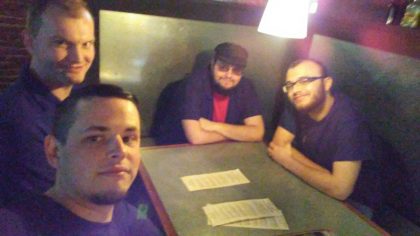 Patriot Prayer and Anti-Fascists Face Off in Portland