Minneapolis, MN – On February 13, 2018, hundreds gathered at the Minnesota Indian Women’s Resource Center to participate in an art build for the February 14 day of action for Missing and Murdered Indigenous Women (MMIW). The event was co-sponsored by All My Relations Art Gallery and the Minnesota Indian Women’s Sexual Assault Coalition (MIWSAC) alongside other groups.

We spoke with MIWSAC Executive Director, Nicole Matthews, who told us,

We see a huge connection between human trafficking and murdered and missing indigenous women. We just want to keep getting out there and raising awareness and doing what we can to make a difference. We need to push people to start gathering the data. And also we need to raise the visibility for native women so we are hearing stories. So we are putting a message out there that our lives do matter and that we are going to do something about it and that the community is going to be made aware of it as well.”

During the art build, we also spoke to Rory Wakemup, the director of the All My Relations art gallery. He told us the art build was styled after the “Bring Her Home – Stolen Daughters of Turtle Island” show at All My Relations. The build created a space for community members to collaborate to raise awareness of missing and murdered indigenous women. Multiple art stations featuring stencils and collage work, and also screen printing buzzed with activity.

At the screen printing station, we heard from Nico, who told us about the “Peoples Library,” a Minneapolis College of Art and Design (MCAD) campus group that’s trying to do more community outreach to connect MCAD students to the south Minneapolis area. Screen prints reading “Justice! For Missing and  Murdered Indigenous Women” and “Bring Her Home”  were created hand in hand by community members and students demonstrating how the screen printing stations worked.

We drifted from station to station talking to artists and community members about missing and murdered indigenous women. Lori Youngbird, a community member said, “This is a good way to get the message out, let people understand that this is happening and it’s been happening for century.” She also told us she’s always surprised at how few people know about the sexual violence and sex trafficking issues facing native peoples in North America.

Deanna Standing Cloud, Program and Community Director of the Tiwahe Foundation, said that justice for missing and murdered indigenous women has been:

an ongoing issue and it’s pretty invisible in the wide spectrum of society. Nobody knows. We have the highest rate of murdered and missing indigenous women, girls, boys and men. And the highest number of police brutality in the indigenous community and nobody is really talking about that in mainstream media. So this is our way of showing and being visible. So people know about this issue because it’s not being told. So this is a story we always have to tell ourselves.”

The art build was followed by a march of hundreds led by a women’s warrior song. We spoke to survivors of assaults, and family members of women who have been missing for years. The interviews spanned from asking for help to find love ones, to wondering why more people weren’t outraged that these tragedies continued to happen.

During the march we spoke with the family of Kateri Marie Mishow, who has been missing since January 1, 2007. They marched behind a banner flanked by children with Kateri’s picture and her name. Behind them, Kateri’s mother and father followed and told us they were missing Kateri. “Bring her home,” her sister in law said.

We spoke to Rene Anne Goodrich, part of Native Lives Matter, who said,

Rene’s statement echoed what we heard from other people we spoke with throughout the march.

The march swung its way back to the Minneapolis American Indian center where it began.  Marchers sang and drummed, some asking why there weren’t more people, others excited that so many people had come. Together they made sure someone was raising awareness of murdered and missing indigenous women in Minnesota, and across North America. Watch the march below: 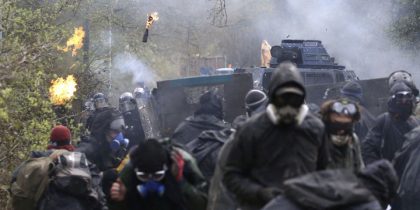 A Report From the Frontlines of the ZAD-NDDL Eviction Attempt