Mandan, ND – On Sunday, January 21, the Water Protector Legal Collective announced that attorneys for water protector Michael Markus, known as Rattler, had reached a non-cooperating plea agreement with federal prosecutors. In the deal, Rattler agreed to plead guilty to one charge of Civil Disorder in exchange for a recommended prison sentence of three years. He had been scheduled to go to trial on two charges of Civil Disorder and Use of Fire to Commit a Federal Felony Offense, which carried a minimum sentence of ten years in prison and a possible sentence of up to fifteen years.

Rattler was charged in connection with events on October 27, 2016, when a militarized police force seized indigenous treaty land to clear a path for the Dakota Access Pipeline (DAPL) to cross the Missouri River near the Standing Rock reservation. The case against him centered on his alleged role in the flaming barricades on County Road 134 that prevented a group of riot police from flanking water protectors on both sides of Highway 1806 that day.

According to Water Protector Legal Collective,(WPLC) Rattler made the decision to take the plea in order to do the least amount of prison time given the heavy chance of an unfair trial. The WPLC cited a randomized study that found over 75 percent of potential jurors in the Bismarck-Mandan area, where Rattler would have stood trial, were “negatively predisposed against the protestor defendants.” “It is next to impossible to expect that jurors holding these attitudes and predispositions, and living in such an atmosphere, can impartially weigh the evidence in the cases,” said Diane Wiley of the National Jury Project, which undertook the study. 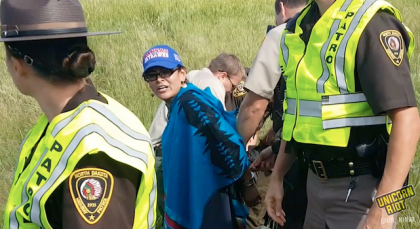