However, the village was only able to stay at this original location for six months, due to zoning codes. The city zoned the village as “Unlisted Temporary Use” because no specific zoning codes exist to permit a tiny home village.

On December 27, 2017, village residents and volunteers began disassembling their home to move it across an alley 200 feet away.

This move cost the Colorado Village Collaborative (CVC), the community organization behind the village, $25,000 to complete.

To help fund the move and further spread awareness about the village, CVC hosted an educational fundraiser, which Unicorn Riot covered:

On January 17, 2017, the new construct of the village passed inspections and received a new certificate of occupancy, therefore, the residents were able to move back in.

Moving the village took 22 days, and during that time, the village residents were displaced and without housing.

In 2018, CVC plans to create permanent zoning for tiny home villages through working with the Denver City Council, so that the safety and stability the village provides for its residents will no longer be temporary.

Fortunately, the owner of both plots of land, the Urban Land Conservancy, prioritizes truly affordable housing and plans to build housing for low-income families on the village’s original location.

Karen Seed, an organizer with Denver Homeless Out Loud, spoke with Unicorn Riot on the first official day of construction for the village on May 20, 2017:

The biggest thing in these four years that we’ve been trying to build this village has been land. We still don’t have our own land to put the villages on, and in a city like Denver where real estate is rapidly increasing in value, the question of where to build it has been paramount. . . The Urban Land Conservancy, some of our associates and friends, own this land that we’re sitting on today. . . They reached out to us and invited us to be here, which was critical.”

The CVC wrote about the village’s completion in a press release:

This village is born in the context of massive increase in housing costs and people forced to live on the streets being criminalized for simply surviving. Tiny Home villages are an inexpensive, quick, community based, environmentally friendly model which can immediately begin to provide homes and community for those without. Beloved Community Village is not run by outsiders but rather is a self-governed community.”

Unicorn Riot captured the excitement of the first official build day for Beloved Community Village on May 20, 2017.

In spring 2018, the CVC is helping to build a second village, which will be on St. Andrew’s Episcopal Church property.

The manifestation of these two villages is hinged on the illegal tiny houses that were built on Sustainability Park in October 2015, which Unicorn Riot covered.

Karen Seed spoke with us about this turning point:

No one in the city would talk to us, no one in the housing authority would talk to us, and instead they were super-focused on criminalizing homelessness and increasing the enforcement of their camping ban, as well as, selling off all of the inner city public housing land in order to make money, and supposedly build public housing somewhere else, but it wasn’t happening.”

Sustainability Park was a plot of land owned by the Denver Housing Authority (DHA), which at one point had been public housing. In 1999, DHA decided to demolish the housing units to supposedly redevelop them into mixed-income, mixed-use buildings. However, that land remained empty for 10 years, and in 2009, The Urban Farmers Collaborative, a project by Groundwork Denver, turned Sustainability Park into urban farms.

In 2015, instead of turning Sustainability Park into affordable housing and mixed-use buildings, DHA sold the land to the Curtis Park Group for market-rate homes for 10 million dollars. The development has been coined “S*Park” with condos starting at over $200,000.

On October 24, 2015, during a volunteer day for the farm, volunteers built five tiny homes. By the end of the night, the group of volunteers was surrounded by about 70 police officers, at least 2 SWAT units, and a helicopter overhead. Ten of the volunteers, including Seed, were charged with trespassing and spent the night in jail.

The time-lapse video below shows the tiny houses being built and then torn down by Denver police. The video was filmed by Laura Goldhamer.

Audrey, a member of Denver Homeless Out Loud, spoke to Unicorn Riot on October 24, 2015 about the significance of the illegal tiny house build:

People really, really need a place to go and right now in Denver it seems like, you know, the homeless don’t really have a right to exist in public, so we are kind of making our own space and you know, letting them know there is a place you can give us to go, there’s tons of land.”

In Denver it is essentially illegal for people who do not have housing to rest, sleep, eat, or store personal possessions outside.

The CVC  believes this criminalization is dehumanizing and hopes to help eliminate the pain and suffering of more unhoused people by constructing more villages and making them permanent communities.

Amanda Lyall, one of the Beloved Community Village residents, spoke at the educational fundraiser on December 15, 2017:

Unicorn Riot will continue coverage of the tiny home villages in Denver, and other issues affecting Denver’s unhoused population, see the links below for our past coverage. 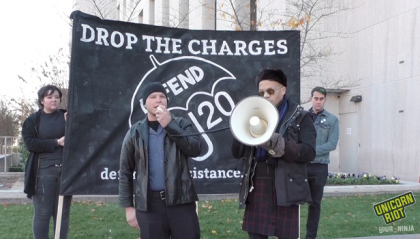 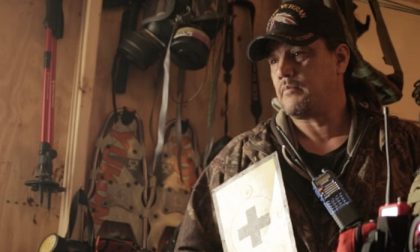