St. Paul, MN – Following the death of George Floyd, community members rallied to end gun violence last Friday amidst an uptick in homicides throughout the Twin Cities. Year-to-date the number of homicides in Minneapolis has nearly doubled.

Marea Perry, mother of a gun violence victim and a pastor, had relived her son’s death earlier in the day at court that Friday, July 10.

Perry was joined by organizers of Guns Down, Love Up and St. Paul School Board Member Chauntyll Allen. The group marched from Rice Street and Maryland Avenue to 444 Maryland Avenue in Saint Paul, the site where Perry’s son Marquez Perry-Banks took his last breath May 3, 2019, after being shot more than a dozen times.

“The thing that I remember the most about him is his love and his love for me,” said Perry.

While the St. Paul march was happening, a concurrent rally in Minneapolis took place, organized by Guns Down, Love Up founder Raiesha Williams. Williams founded the organization following the murder of her brother, community activist Tyrone Williams.

“We have a collective responsibility to end gun violence,” says Allen.

At the end of the July 10 rally, community members suggested ideas for minimizing gun violence. Allen collected their responses in partnership with Guns Down, Love Up. 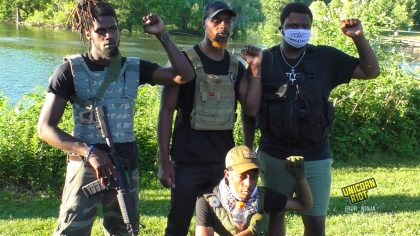 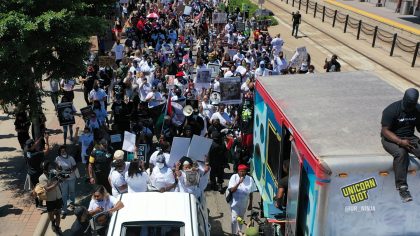