Minneapolis, MN – The morning of Thursday, March 4, saw Minneapolitans waking up to the noise of a surveillance aircraft circling. The spy plane circled from around 9:15 a.m. until departing the airspace just after noon. There are likely to be similar flights in the weeks to come due to the heightened security surrounding the Derek Chauvin trial slated to begin jury selection next week, and the protests that are already being planned. Air traffic control radio data shows that this aircraft is using the callsign “KONA” over the radio, which has been identified in recent weeks by researchers as an FBI code, connected closely to surveillance front companies largely exposed back in 2015.

Initially, the sound of a small aircraft completing an orbit every few minutes over the city piqued interest in a community that has been beset by police aircraft for months, prompting the following video.

Minneapolis we have an aircraft circling but not showing up on flight trackers: pic.twitter.com/0wiAduhtTO

With suitable hardware and software it is possible to collect and parse an array of information beamed to-and-from aircraft. A number of these signals are safety critical and thus require a strong, long range signal such as those picked up by the device at the start of the video above. That piece of equipment is an ATD-200 anti-collision warning system made by Monroy and is the same type found in aircraft cockpits. The handy website AdsbExchange.com, and a Software Defined Radio (SDR) running a program called dump1090, a “Mode S transponder decoder,” are the other tools shown above. Also used for verification but not featured in the video were the website Flightradar24.com and a pair of binoculars (which can help spot tail numbers, but unfortunately not this time).

In lay terms, a system used to ensure aircraft don’t crash into one another picked up a warning message every few minutes. That timing is indicative of a circular flight pattern which necessitated an inquiry with the flight trackers mentioned above, to no avail. Therefore, it was quite clear that there was some covert action involved with this aircraft.

This small constellation of tools provides multiple, independent data sources in the hopes of scooping up any breadcrumbs that could point to the owner, operators of suspicious aircraft. Flightradar24 is populated by government-regulated Air Traffic Control (ATC) data, whereas AdsbExchange.com data comes from a network of civilians running their own antennae, which is then aggregated to a worldwide live display. Those two alone are useful to cross compare. Adsbexchange will often display “interesting” aircraft that are filtered out from other trackers by the FAA for security or other reasons.

In this case, additional inputs were required beyond those flight tracking websites. The Monroy ATD-200 aircraft collision avoidance system that at the start of the video alerted to an aircraft in the vicinity roughly every four minutes, whereas the nearest aircraft on the flight tracking websites showed much further away than such strong signals would have indicated. Therefore, short of image stabilizing or high zoom optics, the only way to solve this riddle was to listen for any communications between the aircraft and the local air traffic control (ATC) tower managing the Minneapolis-St. Paul International Airport (MSP) and surrounding regional airspace.

Thankfully, there exists a website called LiveATC.net which broadcasts live ATC audio to the internet and archives past communications for research. That was where the unmasking of the FBI aircraft occurred. When the crew of that particular spy plane took off from Minneapolis-St.Paul International Airport they used the callsign “KONA282” which is garbled in the audio, but from the controller on the other side of the radio, it’s as clear as day.

Altitude over their target can potentially give clues about the equipment on board and the mission at hand, however that verges on speculation. Typically, police fixed-wing aircraft fly lower than the altitude desired by the FBI on Thursday. More advanced optics and protocols to fly a bit higher in order to maintain operational security are the likely reasons for this, however, signals intelligence gathering devices that vacuum up cell phone and other data can require certain altitudes to function properly.

Some devices like this that can pose as cell phone towers and go by nicknames such as “dirtboxes.” In order to determine whether or not signal intelligence intercepts are happening during the heightened security in downtown Minneapolis surrounding the impending murder trial of Derek Chauvin, other tools must be fielded by researchers, a detailed topic for another day.

“KONA… the new and improved callsign.”

In ATC audio from upstate New York one can hear the pilot of “KONA210” and the controller clarifying the FBI’s “new and improved callsign.”

“This is the new and improved callsign, we should be stickin’ with this for awhile.”

Callsign “KONA” is a new addition to the FBI’s codex. It has been spotted by astute observers via similar methods to those discussed in this article during January and several other times in recent months.

KQM Aviation is a front company for FBI surveillance existing basically on paper and in the FAA registry only.

The FBI uses it to cloak their operations in a somewhat thin veil of secrecy. For one reason or another when they registered a large number of their aircraft to the KQM front company and other false names, they left several large jets registered explicitly to the Department of Justice in the same documentation. (The FBI also failed to create state records for the front companies that normal corporations might have. For more on federal tradecraft involving front companies see Unicorn Riot’s report, Icebreaker Pt. 5, focused on ICE’s Homeland Security Investigations division)

This made it easy for researchers, including this reporter, to put the pieces together with the aid of flight tracking websites. A large number of additional planes are listed here and methods to aggregate related data are here. Planes from this fleet were used to spy on Baltimore residents during the 2015 uprising and many protests since. During that year, the cat wasn’t out of the bag quite as much as it is now, forcing flight tracking enthusiasts to cobble more and more information together in the fight for transparency. Today, tools like software-defined radios streamline some of the most difficult aspects of this research but oftentimes a keen ear is what is needed to finally make the identification. 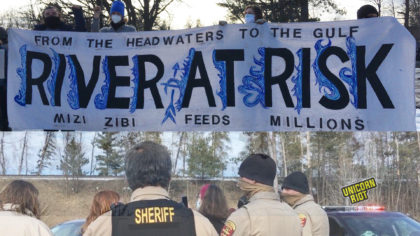