Brooklyn Center, MN – Minnesota authorities were court-ordered to stop brutalizing the press in Brooklyn Center after an aggressive and violent week following the police killing of 20-year-old Daunte Wright. Hours after Wright was killed, a swift and vast community responded to the killing. Shortly after gathering outside the Brooklyn Center Police Department protesters and press were attacked by police. In the week that followed, dozens of press had been shot by police with ‘less-lethal’ munitions, pepper sprayed, punched in the face, slammed on the concrete, and detained outside the Brooklyn Center Police Department (BCPD).

The night of Wednesday, April 14, police detained a Unicorn Riot (UR) reporter, the duo from The Neighborhood Reporter (TNR) and at least three other journalists who clearly identified themselves as press and had cameras in their hands.

After the short detainment and being forcibly photographed by authorities, UR and TNR found their microphones were thrown to the side and broken by the police.

Two days before the equipment-breaking featured in the video above, video journalist Mark Vancleave was forced to have surgery after being shot in the hand with a police munition.

On Monday night I was shot in the hand by a rubber bullet fired by police in Brooklyn Center while covering a protest. The impact broke my ring finger in two places requiring surgery. I won’t be able to pick up my camera again for at least six weeks. pic.twitter.com/IcPfjbVug4

The next night (the night before being detained) on Humboldt Ave. N., Unicorn Riot reporter Niko was deliberately shot in the leg by police with a white chalk 40mm CS marker round as police moved up the block.

Our field reporter Niko had skin broken and blood drawn by an impact round fired at him by Minnesota police while he was documenting #DaunteWright protests on our stream tonight https://t.co/klgeStSaTB pic.twitter.com/QeeGUcfeUi

During the first nights of police aggression, declarations spoken into a long range acoustic device (LRAD) included threats to the media that they must leave or face arrest. The litany of attacks on press led journalist Jared Goyette to file a lawsuit seeking a temporary restraining order on the police. United States District Judge Wilhelmina M. Wright granted the order, barring authorities from arresting and brutalizing press for 14 days.

JUST NOW: A federal judge has just issued a temporary restraining order barring Minnesota state law enforcement from arresting or using force against journalists covering protests; journalists do not have to disperse. https://t.co/puMTmyUsoN

After no arrests or brutality on Thursday, Friday night featured a kettle and mass arrest of 134 people on Humboldt Ave. N. near the BCPD. Dozens of press were told to lay on the ground and were held at gunpoint before having their press credentials checked and their badges and faces pictured by the police. This was all despite the restraining order.

That Friday night, photojournalist Tim Evans was attacked by a Minnesota State Trooper. During the police rush, Evans said a trooper punched him in the face, threw his press badge to the side and slammed his head on the ground before detaining him.

Photojournalist Tim Evans reports that he just was tackled, hit in the face and arrested by troopers as they kettled protesters outside the Brooklyn center police department. He had his credentials clearly displayed around his neck. He is bruised but ok. pic.twitter.com/KoqVyMh6vW

Along with this reality of police attacking the press is the racial dynamics at play. A large majority of the press are white and male. Yet, when press of other ethno-linguistic backgrounds were detained last week, they faced racist practices in the process.

Do y’all realize that the first amendment you are fighting for as member of the press doesn’t protect me as a Black journalist in the same way it protects you as a white journalist? If it all?

The same night that UR reporter Niko was shot while live streaming, Carolyn Sung, an Asian-American CNN producer was arrested and brought to the Hennepin County jail where she was processed. Sung was asked by a MN State Trooper, “Do you speak English?“

A trooper yelled at journalist @CarolynSungCNN as she was arrested for covering protests in MN: “Do you speak English?” She was telling them the zip ties were too tight around her wrists. Her primary language is English.

Let journalists do their jobs! And don’t be racist! pic.twitter.com/Fk5GBbNxlD

Over the weekend, media representatives met with authorities and presented a letter on the “treatment of journalists by law enforcement officers” addressed to Governor Tim Walz, Minnesota Department of Public Safety Commissioner John Harrington, State Patrol Chief Colonel Matt Langer, and Minnesota Department of Corrections Commissioner Paul Schnell. Numerous other instances of attacking the press are listed in the letter.

As the unified command of the ‘Operation Safety Net’ task force escapes culpability and consequences for their violent and unconstitutional actions, they’ve stated individual agencies are “investigating” wrong doing by their officers.

The Minneapolis Police Department hasn’t finalized any discipline against officers for misconduct from *last year’s* protests following the death of George Floyd https://t.co/LfWYOPFEWo

For Unicorn Riot streams and videos of the protests seeking justice for Daunte Wright, see the playlist below. 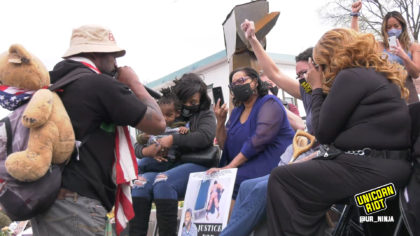 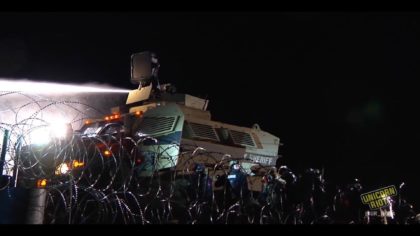