Baltimore, MD – Students at Johns Hopkins University (JHU) and community members in Baltimore protested against the creation of a private university police force by disrupting two town hall meetings on September 22 and September 29, the first of which led to some antagonism with JHU’s VP of public safety, Branville Bard.

The creation of a university police force – the Johns Hopkins Police Department (JHPD) – was postponed for two years in response to the anti-police brutality protests of 2020. Now the university is fast-tracking the process with minimal input from students or the community, despite active opposition going back to 2019 when several anti-JHPD activists were arrested for occupying a university building for around a month.

The 2019 sit-in of a JHU building was spearheaded by a coalition of groups including Students against Private Police and West Wednesdays, a campaign pushing for justice for Tyrone West, a 44-year-old Black man who died in BPD custody in 2013. Led by West’s sister Tawanda Jones, West Wednesdays meets every week to demand justice for those killed at the hands of the BPD.

“We’re out week after week, day after day,” Jones said at a recent rally. “Tyrone was just like George Floyd. He had (BPD officer) David ‘Killer’ Lewis on his neck while he screamed for over 18 minutes for his life.”

“I’m tired of it. And it’s not just about the killer cops – it’s about all the corruption. Everybody’s in bed with each other.”

Additional motivation for the sit-in came from Johns Hopkins University’s training contracts with ICE (U.S. Immigration and Customs Enforcement), all of which were left to expire at the end of 2019.

“These town halls, for Hopkins, were nothing but a formality to get past in order to achieve the ultimate goal of enlisting a private police force as soon as possible,” said Xandi Waystone, a JHU student that attended the town hall protests.

“I’m grateful that the most recent town halls have given Baltimore community members and activists a platform through which to express discontent … however, it would be misguided to call these town halls democratic in any sense of the word.”

JHU released a memorandum of understanding (MOU) that makes clear how exactly the university police force would collaborate with the Baltimore Police Department (BPD). The university is required by law to share the details of the MOU with the public in at least two town hall meetings, which took place this past month. There was a lack of publicity for the town hall events, which led to very little awareness of the MOU among non-student members of the community that the proposed JHPD would have jurisdiction over.

These events were “town halls” in name only – the first one on September 22 was a pre-recorded Zoom discussion with questions and concerns carefully filtered. The event, held in an auditorium on campus, was merely a viewing of that video with a Q&A planned for afterwards.

Protesters flooded the stage and blocked the projectors, chanting anti-police slogans. The hope was that by blocking the mandatory town hall events, the creation of the police force could be delayed further.

Though non-student community members were ostensibly invited to join in the first event, the second event on September 29, this time in East Campus, was decidedly less inviting. Intending to avoid another disruption, the university chose to require student IDs for entrance into the auditorium, further preventing the participation of the non-student community.

Despite obstacles, activists again filed into the second town hall and shut the event down. For the second time, a pre-recorded livestream with filtered questions continued virtually, with those watching at home even potentially unaware of the protest. A third and final town hall event was held fully online.

Systemic Racism in the BPD

The strong opposition to a university police force that would work closely with BPD stems from the remarkable controversies that have plagued the BPD for years: The police killing of Freddie Gray, a police unit indicted for stealing cash and drugs, a Justice Department audit that revealed systemic racism in policing in Baltimore – the depictions of crooked cops in the popular TV series The Wire were far from fiction or exaggeration.

The serious problems in law enforcement in this systemically segregated city have convinced many community members that more policing will do nothing to remedy the underlying issues of inequality, poverty, disenfranchisement, and gentrification around university campuses. On the contrary, it may make matters worse.

Besides these problems with the BPD, there is also precedent for discrimination, violence, and even deaths at the hands of other university police forces. Ons doesn’t have to look very far: At Morgan State University, just two miles away from Johns Hopkins Homewood campus, university police shot a 20-year-old on campus earlier this month while trying to break up an unsanctioned party. He survived the injuries.

Some students involved in the fight against the JHPD say they have experienced retaliation from the university administration.

“The university has retaliated against student leaders … who faced student code of conduct violations,” said one student organizer who wished to remain anonymous.

“Aside from the private police having significant opposition from the broader community in Baltimore, especially on the east side of the city where activists have been fighting Hopkins redevelopment and gentrification plans for years now, the plan also faced opposition from within the university, as was evidenced by the disruption of two town halls despite security and repression from the university,” they added.

“There has been retaliation – and it’s been arbitrary and against the student code of conduct.”

The fate of the MOU – and by extension, the JHPD itself – is in question after the town hall disruptions. Because the mandatory town halls were shut down, the legality of the MOU could technically be challenged. Further protests are being planned, though real questions remain about whether the creation of the new police force can be halted at this stage. 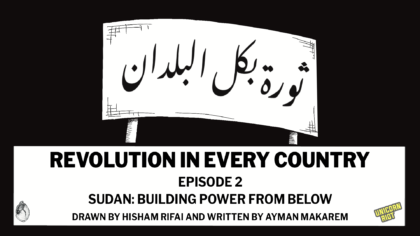 Revolution in Every Country Comic Series: Episode 2 – Sudan: Building Power from Below 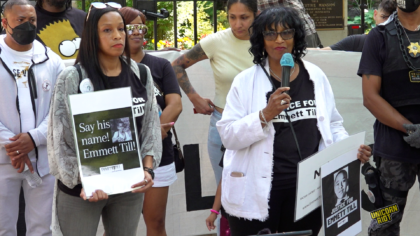