Cochise County, AZ – Seventeen feet above the ground, towering over the native Sonoran grasses and oak saplings of the surrounding bajadas, a group of young people stretched out languidly in the sun, chatting and laughing and playing guitar. In a line to their east, the double-stacked shipping containers beneath them stretched out for over a mile; to their west, the wild grassland lay undisturbed.

On Thursday, at the southern base of the Huachuca Mountains along the U.S./Mexico border, there was little sign of the fight that had unfolded in previous days. The quiet morning stood in contrast to the international geopolitical drama unfolding through this expanse of oak grassland stretching off into Mexico.

Locals say this area is usually quiet, with no evidence of the border crisis they hear about on the news.

In the distance, the crack of a quail hunter’s shotgun disappeared into the silence.

But cutting through the otherwise pristine terrain is a gash of splotched red, blue and yellow stretching patternless through the countryside—column after column of shipping containers stamped white with serial numbers and indecipherable codes, remnants of their nautical journeys.

“They could plant one here but, we’re here,” said Carlee, a blockade participant, as she perched on the edge of a shipping container in the empty space where the next container would lay. As she spoke, she watched long, white clouds drift over the far-off mountains of Mexico.

Since Nov. 29, a loose collection of locals, environmental activists, hippies and migrant solidarity workers have been putting their bodies in the way of the machines. They have successfully delayed the work crews for a week and a half, who had been rushing to drop as many shipping containers into the wilderness as possible before Arizona Governor Doug Ducey leaves office in early January.

What began as a tentative experiment in disruption, escalated to a full-fledged encampment earlier this week. When workers switched to night shifts so they could work unimpeded, blockaders started camping on the site to keep watch.

“We would have two people on each machine trying to stop them,” said Carlee. “And they would just kind of maneuver around people and get really close. And they tried, but we stayed up all night, just making sure that they wouldn’t start moving and going down the hill to excavate more of those trees over there.”

Ary, another blockader, said that at first the workers refused to stop working despite the danger posed to those standing in their way. “At first, they were really driving their machines around us really fast,” explained Ary, as he lay among his friends atop the stacked containers. “Even just the other night, they were still doing that and digging the ground right from under our feet with their excavators, driving very close to people. I think that that just really shows how much money means to these people rather than human life.”

Thursday was the first day the workers didn’t come to the site at all. A private security guard working with the contractors remained on site, sitting in his truck and sometimes chatting casually with protestors to pass the time.

On Friday, workers reported to the site and asked that blockaders allow them to remove their heavy equipment. They loaded up the machines and drove off down the road. For now, at least, it appears the campaign has successfully shut down destruction at this site. Whether work will continue at another section of the border remains to be seen.

“This is what winning looks like,” a protester commented.

“It’ll get built if no one’s standing here,” said Logan, seated atop the double-stacked containers. “At the very least we’re able to sit here and stop as much of this from occurring while whatever forces above us decide what they’re going to do.”

In Jan., Governor Ducey will be replaced by incoming governor-elect Katie Hobbs, a Democrat who has said she will remove the shipping containers when she takes office. But for his last few months in power, since he started dumping miles of shipping containers along the border near Yuma, Arizona in August, Governor Ducey’s $95 million gubernatorial swan song has raged through the mountainous terrain in Southern Arizona, destroying miles of wilderness in its path.

“This is not really even a wall,” said Ary, referring to the stack of shipping containers beneath him. “I look at it like this monument to xenophobia. It’s like art. It’s like this really, really fucked up art piece that the Republicans are making here.”

The stack of containers, which stretches through southern Cochise County, was created by AshBritt, a disaster response contractor based in Southern Florida. The company has been working under contract with the State of Arizona since at least August when they started to build a 3,820-foot long strip of double-stacked shipping containers along the border in Yuma. On Oct. 23, the company signed an additional contract with the state to begin work in Cochise County.

AshBritt conducts operations across the country in the wake of natural disasters, from Hurricane Katrina in 2005 to Hurricane Sandy in New Jersey in 2012. In 2018, AshBritt came under fire from watchdog groups and the Federal Elections Commission for an illegal donation to a pro-Trump super PAC.

Despite nearly two weeks of disruption by those seeking to block the makeshift wall, law enforcement has refused to intervene, in large part because it’s unclear what, if any, laws the blockaders are breaking. The destructive operation they are blocking is taking place on the Coronado National Forest, which falls under the jurisdiction of the federal government. The National Forest Service released a statement Nov. 30 warning visitors to the forest to stay away from the construction. According to the statement, the federal government views the construction project as “unlawful” and potentially dangerous.

Despite these proclamations, federal officials have refused to intervene—in the shipping container piling or its opposition. On Thursday afternoon, five law enforcement agents from the U.S. Department of Agriculture drove past the encampment. When approached by a camper, they identified themselves as federal agents, but said that as far as they could tell, the encampment was not in violation of any federal laws, which allow camping on national forest land.

With the feds apparently refusing to act and acres of precious wilderness at stake, people are choosing to act directly rather than waiting for those in power to sort out their tangled web of jurisdictional disputes and political power games.

“This is exciting to me because it’s one of the times that we are seeing direct action make a tangible difference in real time,” said Egg, who came down from Tucson to participate in the encampment.

The blockaders expressed a variety of reasons why they were motivated to act: concern about wildlife corridors for jaguars and other creatures, destruction of precious wilderness, government overreach, the perception that the project is motivated by racism and xenophobia, and solidarity with migrants.

“Endangered species come through here, people come through here,” said Logan, a blockader, referencing the riparian corridor of oak and juniper stretching north to south down from Miller’s Peak. “All life has moved, has migrated, historically. That’s just part of the way the world works. I think cutting it off doesn’t make any sense. It’s very disruptive to communities, both human and non-human. It’s important to keep open the free flow of life.”

“This border right here is a deep laceration of separation,” said Ary. “It is a line that makes an ‘other.’” 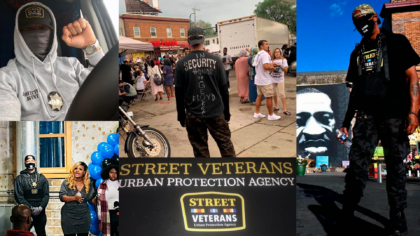