#FergusonRemembers #MoralMonday #HighwayShutdown | To commemorate the anniversary of the killing of Mike Brown, a weekend of healing, organizing, and actions occured in Ferguson and throughout St. Louis. Although the peaceful marches and vigils for Mike Brown, Vonderitt Myers, and the countless others who fell victim to police killings took place, the attention focused on Sunday and Mondays activities. On Sunday night hundreds of protestors were on W. Florissant Ave. in Ferguson when a flurry of gun shots rang out. Immediately after the gunshots scattered the protestors and police alike, four policemen who were in an SUV shot Tyrone Harris (who was coincidentally a friend of Mike Brown), who police later charge with four counts of 1st degree assualt on a law officer for shooting at car full of policemen. On the scene documenting was @search4swag and he was detained for filming. Later that night, the police shot countless rounds of tear gas into the Canfield neighborhood after people started to comply with a dispersal order.

Clergy led the #MoralMonday Department of Justice protest in which 57 people were arrested, including Cornell West, Rev. Sekou and prominent twitter activists @Nettaaaaaaaa & @deray among other for blocking doors. Later during Monday, protestors blocked traffic on I70 in St. Louis and 50 or so were arrested.

#Tarnac | Tarnac 9 activists accused of “criminal association for the purposes of terrorist activity” for allegedly sabotaging high speed rails in France have had their terrorism charges dropped. This is worthwhile, because the Tarnac 9 claim to have been targeted, because the state places the charges at their feet and calls them “Ultra-left Anarchists.” The state also claims they are “invisible committee of the imaginary party,” who wrote “The Coming Insurrection.” Using passages from that book they claimed the Tarnac 9 were terrorist. The specific terrorism charges have been dropped after a seven year investigation, but four individuals are still facing related conspiracy charges.

#EPADisaster | EPA accidentally spilled 3 million gallons of mine waste turning the Animus River orange, which leads into the Colorado. The state of Colorado and the Navajo Nation have declared State’s of Emergency. According to President Russell Begaye of the Navajo Nation, the nation has been struck extremely hard by the mining disaster, the rivers are sacred to their people and are used to water their organic crops. Water stores are depleting quickly on the reservation, and local farmers and ranchers are worried about the future of their farms.

The president for the Navajo nation demanded answers, and information on what the mining waste contained.  Some reports have tested contaminated water and found it contained 3,500 times the safe amount of lead, and 300 times the safe levels of Arsenic. According to a presentation the president and Council members of the Navajo state that the EPA has told them that the water was safe, but demanded to watch those stating the the water is safe drink from the river and prove it. The EPA has set up a page on their website to explain the disaster and their clean up efforts. The site continues no numbers on contaminants in the waste flow, only that testing is underway. The Navajo nation has stated that they should be receiving clean water, instead of being told to wait while the water is tested.

#AndreGreen #ZacharyHammond | On Sunday night in Indianapolis, 15 year old Andre Green was driving a car that was targeted by police as being stolen. According to police, they attempted to pull the car over and some passengers fled, they shot Andre as he exited the vehicle. The police said they were in danger from the vehicle moving towards them. Andre is the youngest person killed by police since Tamir Rice last November.

Zachary Hammond, a 19 year old unarmed white male from South Carolina was murdered by police on July 26th. His family is asking for a federal probe into his death. He was seated in his car when the police operated a drug sting and shot him twice in what they report as self-defense as they feared he was going to hit them with his vehicle. Zach’s family has credited #BlackLivesMatter protestors with bringing national attention to his case. At least 197 black people have been killed by police in the U.S. in 2015.

#MigrantCrisis #Greece | From January 2015 to August 2015, Greece has had over 124,000 migrants/refugees land on their territory. As the migrant crisis continues to be exacerbated by the ongoing conflict in Syria and Afghanistan, people leaving those areas are coming up against another brute force, that of the Greek state. Recently Greek police have been documented slapping, hitting, clubbing, and spraying fire extinguishers on migrants. Over 7,000 migrants arrived during the month of July on the island of Kos and they are currently being funneled into a locked stadium without needed amenities like washrooms, running water, and electricity. The mayor of Kos stated that he feared a “bloodbath” if the situation continues to worsen. Update: Greek authorities have sent a cruise liner and more riot police to Kos.

#Chicago | A $200 million budget cut and a shift in student enrollment has affected Chicago Public Schools and this Monday 1,500 teachers and support staff were fired. Chicago has been wrought with budget cuts in the education sector as was seen with 50 public schools closing in 2013.

#NotMyStonewall | There is a new movie coming out end of September about the Stonewall riots in NYC 1969. The “Stonewall” trailer (tagline: “Where pride began”) focuses on a fictional blond man named “Danny” from Kansas, played by the English actor Jeremy Irvine, who moves to New York City and discovers the Stonewall Inn. Soon after, the man is throwing bricks through windows and climbing on cop cars.  Director Roland Emmerich, who is openly gay and best known for apocalyptic blockbusters like “Independence Day” and “The Day After Tomorrow,” has described the film as “a labor of love.” But critics say they believe Emmerich’s movie, is going to whitewash history and erase the contributions of the transgender activists, drag queens and people of color who were there at the beginning of the riots.

“To all considering watching the newest whitewashed version of queer history,” Cordova-Goff’s petition says, “it is time that black and brown transwomyn and drag queens are recognized for their efforts in the riots throughout the nation.” The actual trans woman of color who threw the first brick was Marsha P Johnson. Alejandro Juarez shared a meme album of all the other revolutions that “Danny” was a part of in history.

We were joined by three guests.

The second guest was Unicorn Riot producer Pat Boyle who spoke about recent police repression against himself as a journalist and other organizers of recent police brutality protests.

The third guest was Michelle was spoke amidst connection issues about the third year of Utah Tar Sands resistance action camps. This years direct action resulted in 4 arrests and a stoppage of tar sands work for a full day. 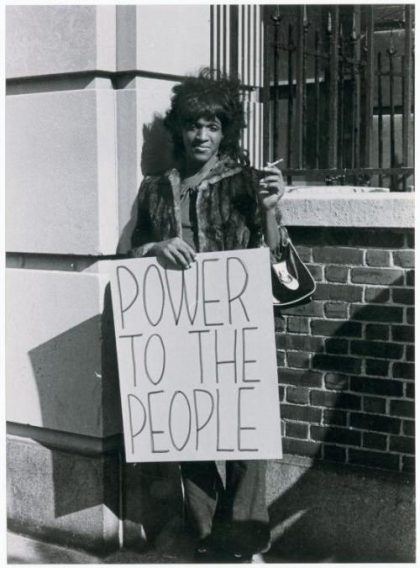 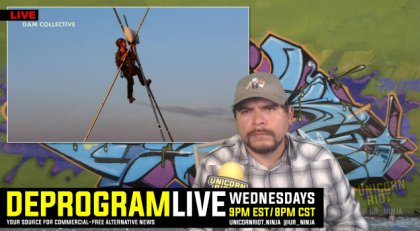