St. Paul, MN – On February 13, 2016, Unicorn Riot attended the “Broken Hearts Rally: Picking up the Pieces for Unity.” The rally was held in Arnellia’s jazz club in Saint Paul, Minnesota. It was originally slated to be held outdoors, but the event was moved indoors due to extreme cold temperatures.

The event’s facebook description stated the goal was to uplift “victims of Police executions: Marcus Golden, Philip Quinn, Darryl Crews and Guillermo Canas murdered by St. Paul Police. Jamar Clark, Terrance Franklin, and Fong Lee, murdered by Minneapolis Police as well as Michael Kirvelay murdered by Columbia Heights Police.” The event made space for family members to share their experiences as they seek justice for the loved ones they’ve lost.

Monique Cullars-Doty opened up the Broken Hearts Rally by sharing the story of her nephew Marcus Golden who was murdered by St. Paul police. “I’m so glad that you’re here so we can lift one another up. This is about unity. It’s about justice. It’s about picking up the broken pieces.”

Monique wanted to make it clear how important the support from the community was for her and her family.

After Monique’s introduction, Michele Gross of Communities United Against Police Brutality spoke on the issues of police murder in Minnesota. She unrolled a scroll of stolen lives that had 218 names of people killed by police in Minnesota since the year 2000. Michele stated that this must end. She thanked everyone for their work and urged people to continue what they’re doing. Michele Gross stated, “In all these cases, rarely have we even seen a drop of Justice. Just know that this is unacceptable and we will continue to fight. Thank you.”

After Michele, Andrew Henderson of COPBLOCK spoke. Andrew made a video of him lodging a complaint against the St. Paul Police officer that urged people to run over protesters. He suggested that everyone film the police. He believed that the only thing that the community could do was film, film and spread it around the community. Andrew, believes that we hold the police accountable by making sure they’re are filmed with their interactions with the public.
Both Andrew and Michele organize copwatches in the Twin Cities.

Bill Kirvelay followed Andrew and shared the story of Michael Kirvelay’s killing at the hands of police. He said, “In less than two minutes after responding to a mental heath check, and after being ordered to not enter the property, they entered the property and killed Michael.” Michael’s sisters were taken to a the police station and put into interrogation rooms for over six hours.

Bill Kirvelay said, “On this Valentine’s Day, I want to thank Black Lives Matter’s who I keep thanking, and saying, that’s it’s proof that’s not about black and white, or anything they keep trying to push down our throats to keep fighting with each other. It’s about the community versus the thin blue line.”

Next, Darlene Hane spoke on Philip Quinn‘s murder by the St. Paul police during a mental health check. Darlene said that Michael’s family’s story remind her of their own. Their family is on the verge of the grand jury, and she couldn’t give date’s or times, because if there are protests the grand jury will be postponed. She stated she felt censored.

Darlene said she’s dealing with the police again, not with someone on her side. She told those gathered that the County Attorney said that she must feel upset, because she was the one who called the police for mental health check to their house. Darlene said the process makes her feel like it’s a joke, a waste of time, a game. She was held for 4 hrs afterwards and asked for a lawyer and a doctor, and the police continued to hold them in her room. Phil’s mother was also held at the station until they called a lawyer.

Darlene’s daughter shared her story, she said, “I read on facebook RIP Phil. And I just knew that he was dead. So I asked my grandma and she let me know the final word–that he was dead. Then I start running to over where it says do not cross to go see my mom because I really missed her. They pulled a gun out on me and put me a squad car.”

Darlene told everyone that, “Black Lives Matter came to my house, and knocked my door, and offered help. I never got any of that from the police, they just treat me like it’s our fault it’s always our fault, nothing is their fault.” Darlene, a registered nurse also stated she tried to render aid to Phil Quinn after the police shot him and handcuffed him. They restrained her and she watched him bleed out.

King Demetrius Pendleton spoke on his daughters death by a drunk driver. The drunk driver hit his daughter at 120 mph and never touched his brakes. He explained that it took six months for the name of his daughters killer to be released by the police, and after the man was arrested he was released on no bail on the same day. He shared statistics on distracted and drunk driving in Minnesota.

The next speaker was Dave Boehnke from the IWW: he said, “We gotta do more than catch the system when they over play their hands. We gotta overthrow the system. That’s not gonna happen by begging them to do the right thing. We’re gonna have to organize for power. We are going to have to do that even if the tears are coming down our cheeks at times… We’re going to have to overthrow the system and take it over. Because this system isn’t built for justice and we’re going to continue to be heartbroken until we are running one that is.” He spoke of having strong organizations to take on police brutality head on.

Mel Reeves a long time local organizer who put together the Twin Cities Coalition for Justice 4 Jamar said, “We need system change. Nowadays you say revolution. No one knows what the hell you’re talking about… You have Bernie Sanders saying we need a political revolution while voting Democrat. Pretty confusing stuff.” He said that people needed to continue to apply pressure, and that with enough people in the streets, they can get anything done they needed.

Monique then brought on Chauntyll to explain the Assata chant. She lead the room in the chant, but also explained the reasons they used it. Chauntyll started by thanking Monique because people really need to heal their heart. Chauntyll said that the system wasn’t there to dispense justice, but to protect their money.

After Chauntyll, JR Bobbick explained the story of Sarah Lee Circle Bear, who was killed in a Brown county jail a day before Sandra Bland. The police claim that after holding Sarah for 72hrs She overdosed on drugs. JR stated that a lot of this happens in Native American communities and Sarah Lee Circle Bear did matter, and she was the mother of 3 children and pregnant when she died. Her friends and family said they know she didn’t do drugs.

The second to the last speaker was Pastor Perry who shared the story of her 14 year old daughter who was brutality beat by Mall of America security. She said that security asked her daughter to leave because she was underage. She went to the transit terminal but didn’t have enough change. The security officers threatened her with arrest for trespass if she didn’t get out there. Her phone was dead so she wanted to call her mother to get a ride and looked for a phone in the mall.

The security guards threw her 14 year daughter to the ground and fractured her back. She closed by saying, “Whatever your purpose is for being here, we welcome that. We want you to be a voice in the community to let them know that it can happen to them.”

The final speaker was Dee from the IWW African Peoples Caucus, who spoke on the Black experience in America. He said, “The playing field is not even. It never has been. It was never set up to be even. It was always designed for us to fail. The system is not designed to protect. It is designed for you to be divided. It is designed so when you mess up, they make money off that.” He talked about the beginnings of police forces by the upper classes to protect their wealth and the Prison Industrial Complex.

Unicorn Riot also interviewed Monique after the event ended to get an idea why she organized the Broken Hearts Rally:

“So as you hear these stories you think about what you can do, what your part is in helping these families get justice. It’s not always getting out in the streets. That’s not for everyone, but you can pick up a phone, write a letter, you can share a post, just think about what ways you can be influential in the movement for justice.”

The event was powerful and allowed many people to speak and be heard by various communities. The overlap of stories and interconnections of experience was eye-opening. While the rally ended up inside, it was an effective way to be able to actually hear the stories of those who’ve lost family members at the hands of police, but also allow the families to connect with each other and be supported. 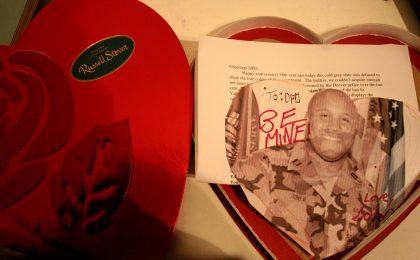 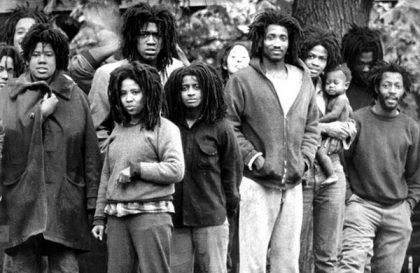