Video posted to Facebook by the Red Warrior Camp shows a crowd of indigenous water protectors, some on horses, facing a line of riot police.

State troopers from the North Dakota Highway Patrol were present in riot gear, arriving on scene in a gray school bus which has been observed at other direct actions against DAPL.

Law enforcement also deployed a Bearcat armored vehicle, which as far as we know has not been brought to any anti-DAPL actions until this event.

Work was stopped at the site for the day. As far as we know, no arrests have yet taken place in connection with this direct action.

“Let the police chase us around – give ’em something to do.  Long as DAPL ain’t working, we’re winning, so that’s what’s up.  Keep ’em busy!” – Masked water protector in Red Warrior Camp video

Red Warrior Camp issued this statement about the action:

Today, Tuesday September 27th, after a powerful ceremonial action on Sunday September 25th, hundreds more from the Standing Rock Oceti Sakown encampment attended 3 sacred sites in a 70 car caravan to conduct ceremony and intervene in the continued construction of the pipeline and destruction of Indigenous Lands and Waters. Led by the Horse Nation, the group of Indigenous Land Defenders and Water Protectors, Families and Warriors, accompanied by Human Rights Advocates and Observers, unarmed and in full ceremony, stood united and strong in the way of the Dakota Access Pipeline.

Police, armed and ready, were tense despite our acts of deescalation and our non-violent stance. They have since claimed shots were fired at today’s action. No shots were fired. Instead, the day was full of songs, prayers, life and hope. Where the state and the Federal government have used violence as a tool and tactic, where they have clearly and seriously violated our Indigenous and human rights to free prior and informed consent over any and all activities on our tribal territories, we have continued to conduct ourselves with dignity and in ceremony.“

Last week, Dakota Access, LLC purchased Cannon Ball ranch, a private farmland property near the Missouri river.  The ranch is within walking distance of the #NoDAPL overflow camp area where thousands of water protectors have been living.

This land parcel had been the site of contested DAPL construction and work stoppages by water protectors, before work in the area was halted at government request.

The purchase of this land may be in violation of North Dakota’s anti-corporate farming laws, and on Tuesday, September 27, North Dakota Attorney General Wayne Stenehjem gave Dakota Access, LLC 30 days to explain the purchase.

Water protectors and their supporters have vowed to continue disrupting Dakota Access Pipeline construction with the intention of stopping the pipeline from being finished.

Unicorn Riot will continue to do our best to bring you stories and in-depth information from the front lines as actions continue to occur. 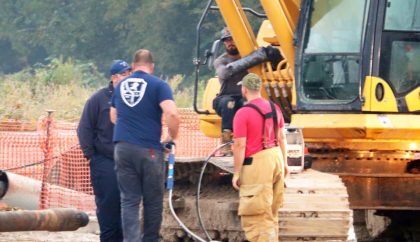 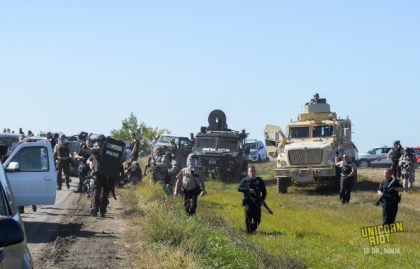