The caravan was followed by two helicopters and a circling airplane. Workers had left the area moments before the protectors arrived. After praying for nearly an hour, everyone gathered to caravan to a second site.

As the water protectors left the site, a crop-duster airplane appeared as sprayed the area with an unknown substance as people hurried to their vehicles.

Crop duster flies over spraying as people move back to their vechiles. #NoDAPL pic.twitter.com/xEuKu3A66k

The water protectors went to a second site to pray. They prayed for 40 minutes and as they left the site, a large amount of police vehicles arrived and blockaded the only exit on the public road leading to the DAPL work site.

Dozens of militarized police with shotguns appeared with a Bearcat armored vehicle as well as an MRAP. The Bearcat was also brought out by police at yesterday’s action, but the MRAP, a larger tan colored armored vehicle, had not been seen at any DAPL sites until today.

After blockading the exit points, police vehicles sped across open fields towards the crowd of protectors as they left the site. Several arrests were made, as police brandished loaded shotguns, and assault rifles. The latest information we gathered is that there were up to 21 arrests.

Unicorn Riot was live when police arrived at the scene of the work stoppage, below is a highlight of when the Bearcat arrived until the end of the stream as well as the full stream:

We will provide more details about today’s #NoDAPL direct action and arrests as they become available.

Unicorn Riot will continue to do our best to bring you stories and in-depth information from the front lines as actions continue to occur. To help our volunteer-operated, horizontally-organized, non-profit media collective please consider a tax-deductible donation: 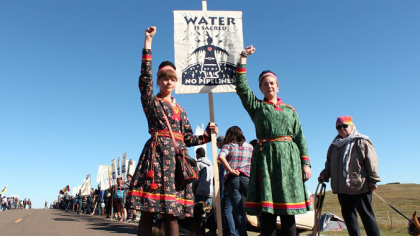