Livestream videos posted to Facebook shows three people attached to construction equipment with lockboxes. One video shows the man streaming being arrested as the stream cuts out. Another local corporate news Facebook video stream shows the lock down in progress as North Dakota Highway Patrol and sheriff’s deputies make arrests.

“For far too long as Indigenous people, our rights, our water, and our land have been taken from us. And we’re not going to stand for it no more. This pipeline is a pipeline to the past. We need to be building sustainable infrastructure for the future, not destructive unsustainable industries that hurt land, that hurt water, that hurt people. Everything is wrong about this pipeline… We’re here standing in solidarity with millions of people from around the world that are against this pipeline.” – Indigenous water protector, while locked to heavy machinery, on Kaden Jeray Facebook stream

Wednesday’s lockdown actions against DAPL come on the heels of similar disruptions on Tuesday, which stopped work for the day on two different pipeline sites.

At least 20 people, including two Unicorn Riot journalists, were arrested during Tuesday’s actions by militarized police wearing riot gear, some of whom brandished automatic weapons.

Tuesday also saw over a hundred #NoDAPL solidarity events across the country and the world during an international day of action.

In a press release issued about “illegal protest activity”, Morton County Sheriff Kyle Kirchmeier announced increased charges against people who locked down during Tuesday’s actions, as well as felony charges against some of the people involved in the direct action on Wednesday.

One person was arrested for “conspiracy to commit obstruction of a government function” and had their vehicle impounded after officers allegedly “witnessed the driver transporting protesters.”

The state of North Dakota has reportedly spent almost $2 million on mobilizing law enforcement against indigenous water protectors, and Governor Dalrymple has asked the federal government provide funding and personnel to assist in protecting pipeline construction.

The North Dakota Office of Emergency Services has also requested a loan of $6 million from the Bank of North Dakota to “offset costs for providing assistance to local law enforcement” related to pipeline resistance, according to the Bismarck Tribune.

Tribal leaders and Indigenous action organizers responded to the escalation of state repression against the water protectors, and vowed to continue their nonviolent direct actions to stop the completion of the Dakota Access Pipeline:

“This was an absurd and overzealous usage of force by North Dakota law enforcement. Such blatant disregard for the safety and legal rights of unarmed water protectors should not and will not go unnoticed. And yet, this inappropriate behavior by police will not deter our peaceful struggle to stop this pipeline.” – Dallas Goldtooth of the Indigenous Environmental Network (via Sacred Stone Camp)

“These non-violent direct actions are part of a long-term commitment to prevent the contested Dakota Access Pipeline from entering into the ground, which water protectors (both indigenous and non-native allies) see as a raping of Mother Earth.” – Statement by Red Warrior Camp

Unicorn Riot will continue to cover the struggle Dakota Access Pipeline and bring you more information as best we can. 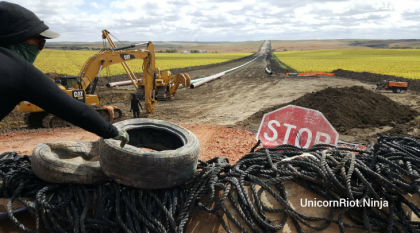