Crookston, MN – Over a month has passed since John Henry Torres was “jumped” on Christmas Day, outside of Captain Crook’s Bar in Crookston, Minnesota. The assault resulted in John’s skull being fractured which led to his death on January 1st, 2016. John’s family, including his four children, have been holding protests to bring attention to the amount of time that has passed with no arrests since the attack that led to John’s death.

Rita, John’s wife, spoke to Unicorn Riot and shared her frustration that John’s assailants, who are white, have been identified but have not been charged. She said,

“It’s making seem like it’s race. If a Hispanic does something, right away they’re locked up…now that the suspects are white nothing’s being done.”

According to January 4th, 2016 news coverage of the incident, police have identified and interviewed John’s attackers as well as witnesses who have identified the assailants. A self-defense claim is not being used. Rita has been in constant communication with the Crookston Police Department.

When Unicorn Riot contacted the Crookston Police Department we were told by Police Chief Paul Biermaier that the investigation has moved to the Polk County Attorney’s office for review.

The police say that they are awaiting the attorney’s comments on the investigation to see if any more interviews need to be conducted. The family is holding protests to call attention to the lack of arrests. They fear the delay in movement on the case means police are letting the assailants who killed John Henry Torres walk. They believe the only reason this is happening is that the assailants are white and John Henry Torres was Hispanic. The family believes if roles were reversed, if it had been a white person assaulted by someone Hispanic, arrests would have been made instantly. The Polk County Attorney Office sent a press release to Unicorn Riot stating that the person who killed John Henry Torres, a Brock Dale Strommen, has been charged with First Degree Manslaughter, Assault in the Fifth Degree and Disorderly Conduct by a Polk Country Grand Jury.

Also Unicorn Riot was told that the Polk County Attorney’s Office and local law enforcement would not be commenting any further on the “on going prosecution.”

Full text from press release below.

These charges stem from a December 25, 2016, incident in Crookston, Minnesota, where John Henry Torres was injured. Mr. Torres later died on January 1, 2016. 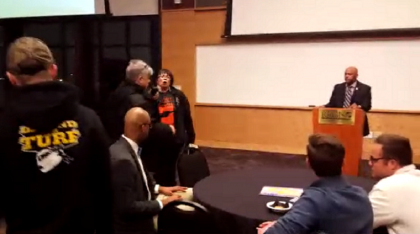