Lee County, IA – Early Wednesday afternoon, a group of water protectors entered a Dakota Access Pipeline construction site where earth was being cleared. This is a different site than the drill bore area near the Mississippi River, where most actions in Iowa have taken place thus far.

A woman named Krissana Mara, age 31, attached herself to the arm of an excavator using a lock-box device at a site down a dirt road off of 320 Street on the side of Highway 286.

Montrose Police and the Lee County Sheriff’s department responded to the action shortly after the lockdown began.

Montrose Police Chief Jordan Maag (who was sworn into office in 2014 at age 22) arrested Jimmy Betts, who had been present to provide food and water to Krissana Mara during her lockdown.

As the end of the workday approached, Karissa voluntarily unlocked from the lockbox and was promptly arrested.

Our reporter arrested while covering Wednesday’s lock-down action is currently imprisoned (as of 1am CDT on October 13, 2016) at the Lee County jail in Montrose, Iowa.

This AM, when asked about our journalist he arrested, Lee County,Iowa Sheriff Deputy Dakota Foley says "you don't have a journalist" #NoDAPL pic.twitter.com/8Mq2t1PlOu

UPDATE [11:30AM 10/13/16]: Our reporter Jenn, arrested yesterday during #MississippiStand #NoDAPL coverage, was just released from Lee County, IA jail on $300 bond. As far as we know, 100+ individuals arrested till now at #NoDAPL protests in Lee County have been booked/released w/o bond. Yet bond was required to release our reporter Jenn. 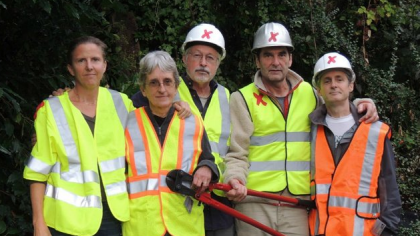 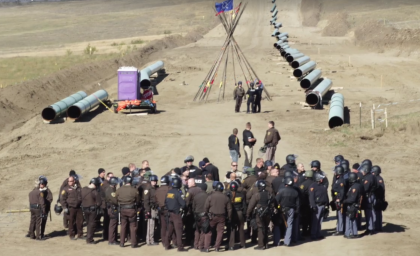