Minneapolis, MN – On Monday, November 21, a press conference was held at the Minneapolis City Hall in response to an officer-related shooting involving six unarmed young people who were detained overnight for interrogation, and later released with no charges.

“They didn’t catch the people that were doing the shootings on the other street! But they took my kid and the rest of them downtown, and in the meantime they didn’t even help what was really going on, down there.” – Odyssey, mother of the driver of the vehicle

Early morning on Saturday, November 19, as a fight took place nearby Target Field, six youths in a car in downtown Minneapolis on the 400 block of 3rd Avenue North were instructed by police to leave the area.

As the youths complied with the officers’ commands and attempted to back up their vehicle to exit the scene, their car collided with an MPD squad car. According to witnesses, it was the MPD vehicle which struck the youths’ car. The officers inside the squad car were uninjured by this collision. In response, officers opened fire on the civilian vehicle, unloading lethal rounds at/into the car.

Neither the driver of the vehicle, nor any of the passengers or pedestrian passers-by, were physically injured by the gunfire. Police officers then aimed lethal weapons at the passengers and instructed all six youths to come downtown with officers; they were told that while they were not being placed under arrest, police officers wanted to “ask them some questions.”

“This is gonna happen again to somebody else’s kid and it’s not gonna be such a good situation, where these kids are standing here… we’re gonna be going to a funeral.” – Lou, father of the driver of the vehicle

LIVE: Mother of driver talks about how daughter forbidden to get water, phone calls when detained by MPD; car held https://t.co/2RhefvhIu5 pic.twitter.com/3me6bCDiNg

After the press conference, attendees marched into City Hall while chanting and holding signs. A visit to the Mayor’s office was paid in an attempt to demand police be held accountable for their actions.

Michelle Gross from Communities United Against Police Brutality (CUAPB) made the connection between reckless and fatal endangerment of civilian lives by police officers who are rarely held accountable for their actions.

LIVE:Michelle Gross from CUAPB points out that lack of accountability in Mpls leads to fatalities like Jamar Clark https://t.co/zcDC9t5ZR5 pic.twitter.com/nVKPGXviXZ

Odyssey and Lou Wade, the parents of Caylea, thanked everyone for attending. Lou implored people to join the struggle to hold police accountable: “Please, please join, because this could be your kid next.”

UPDATE: The six people that were in the car that Saturday night have filed a formal complaint with the city for the officers’ use of force.

UPDATE: The officer involved with the shooting has been charged with two felonies for the reckless shooting. 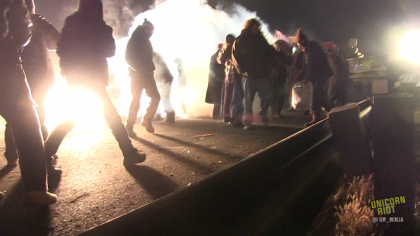 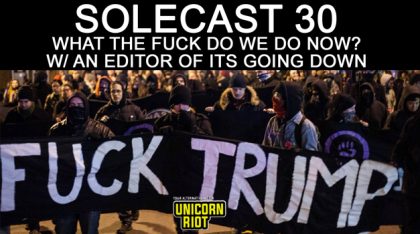 Solecast #30 “What The Fuck Do We Do Now?” with Editor from It’s Going Down