Twin Cities, MN – Demonstrations continued Saturday evening over the police killing of Philando Castile. Protesters blocked traffic through downtown Minneapolis after a rally and then later in the evening on Interstate 94 in St. Paul, near the Dale Street exit.

Below is a video of the police attacking Unicorn Riot journalists and the crowd with an assortment of munitions and weapons:

Unicorn Riot was able to cover both of the above events, and more.

Around 4 p.m., hundreds gathered in Minneapolis’ Loring Park for a rally and march dubbed ‘Day of Atonement’. Many speakers spoke very pertinently about many issues. A majority of folks in attendance appeared to be white, and many spoke of race and police brutality in an open mic style.

Protesters took the streets and received a mass amount of public support:

The objective of the march was to disrupt traffic and to attempt to shut down the Basilica Block Party. However, when the crowd approached the Basilica gates, a line of Minneapolis police prevented them from entering.  The crowd complied to not enter, instead staging a die-in, then marched back to the park and dispersed.

Around 7:00 p.m., hundreds began a march from the site of the occupation outside the governor’s mansion in St. Paul. Protesters took to the streets, marching towards the interstate and eventually shutting down I-94 in both directions.

A standoff ensued on the interstate for several hours. Police encroached upon the crowd and then fell back multiple times.

Police retreat as march continues down the interstate. I94 #Stpaul #PhilandoCastile pic.twitter.com/S6YXDY6Qu3

During the standoff on the Interstate over 50 people were arrested. To view the I-94 shutdown LIVE, watch below:

The main chant for the march was “we’re just going on a walk”. While the march remained one hundred percent peaceful, protesters were still kettled on Grand Avenue with a massive amount of weaponry on the side of the police.

Unicorn Riot journalist, Lorenzo Serna, was amongst those kettled. Lorenzo was eventually released without charge after their detainment.

To view this demonstration LIVE, watch below:

Here is a recap of the day’s action:

Unicorn Riot has been present on and off during the entirety of the Philando Castile protests reporting from the front lines and interviewing participants. Check out our past Philando Castile coverage at UnicornRiot.Ninja. 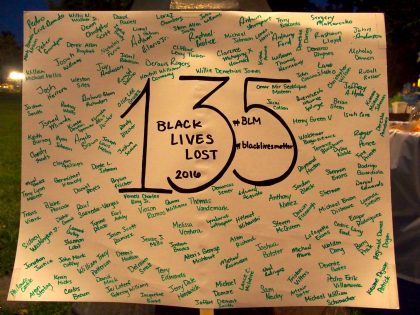