Each Summer Solstice, a group known as Wild Roots Feral Futures sets up camp in the wilderness for over a week. The location of camp is different every year, but is placed somewhere near the Southwest area of Colorado. This year, 2016, will be their 8th year.

In 2015, Unicorn Riot camped with Wild Roots Feral Futures and gathered audio interviews as well as imagery from the beautiful wilderness area. We put together a dispatch from the forest. Below you can view the dispatch in its entirety [14 min].

Quotes from the video above:

“Maybe it’s safe to say that most folks who come out here feel that there are some really problematic aspects of the dominant culture, if not industrial civilization as a whole, that require being addressed and challenged and confronted.”

“We gotta say ‘Hey- technology is great and all and it does improve people’s lives, but there needs to be a balance and the balance is tipping way too far to the environmental destructive side.”

“There is a space you can gather and do this work and know these people and share these thoughts, and it’s growing.”

On April 7th, Wild Roots Feral Futures’ wordpress announced their plans to gather for the 8th year running. The following are excerpts from their announcement:

“Wild Roots Feral Futures (WRFF) eco-defense, direct action, and rewilding encampment will take place in the forests of Southwest Colorado this coming June 18-26, 2016 (exact location to be announced). WRFF is an informal, completely free and non-commercial, and loosely organized camp-out operating on (less than a) shoe-string budget, formed entirely off of donated, scavenged, or liberated supplies and sustained through 100% volunteer effort.

We would like to invite groups and individuals engaged in struggles against the destruction of the Earth (and indeed all interconnected forms of oppression) to join us and share your stories, lessons, skills, and whatever else you may have to offer. In this spirit we would like to reach out to frontline community members, local environmental groups, coalitions, and alliances everywhere, as well as more readily recognizable groups like Earth First!, Rising Tide North America, and others to come collaborate on the future of radical environmentalism and eco-defense in our bio-regions and beyond.

Daily camp life, along with workshops, skill shares, great food, friends, and music, will also include the volunteer labor necessary to camp maintenance. Please come prepared to pitch in and contribute to the workload, according to your abilities. “ The week-long schedule of workshops is created within the first couple days depending on who comes to the gathering each year but usually includes wilderness skills like fire-making, shelter building, edible and medicinal plant walks, stalking awareness, tool & implement making, orienteering and navigation, self-defense tactics, star watching, and permaculture.

Volunteers form on-site medic and conflict-resolution teams, while others help run the kitchen and manage the community latrine. Having communal fires and communal latrines minimizes the overall impact on the land where the gathering is held. For the same reason, pets such as dogs are discouraged, though accepted. One part of the camp was set aside as a space only for people who identify as women and/or transgender. Last year, this space was called “Awesome Camp” and it was reserved for anyone not a cis-gender man — that is, a man who identifies with the male gender he was assigned at birth. In the podcast below, you can hear from residents of “Awesome Camp” explaining more about why this space exists within the greater Feral Futures camp.

Quote from the above video:

“As far as the evolution of our gender goes as a species, I feel like Awesome Camp is a place that gives space to us defining what that means. One of the reasons that [Awesome Camp] has to have an element of separateness is because not everyone is venturing into what opening up gender means… If someone’s not venturing into defining their gender for their own experience, the constructs… and the programming we come with can be pretty volatile and violent.” A central aspect of the Wild Roots Feral Futures camp, which we were unable to adequately represent with our summary dispatch video above, is the group’s desire and attempts to respect, honor, and invite the indigenous people of the land and their history to guide and benefit from the yearly gathering.

Last year, the camp was located in the San Juan National forest, but this was originally native Ute land. In the decolonize section of the WRFF website, links lead to this quote:

“If we do not relinquish our settler privilege and grow healthier relationships with Indigenous peoples, life, and lands on their terms, then we will only be skimming across the surface of decolonizing movements, creating the appearance of transformative change, but actually cementing our occupation and theft of Indigenous lands and cultures even more firmly into the continent’s already bloodied ground.” – Renewal, Remembrance, and Resistance for Decolonizing People of European Heritage

After the camp, one person expressed their experience at the camp in a post on their personal wordpress and sent it out to the group.

“To gather about the celebration of each being’s wild roots and the limitless horizons of feral futures… To me, much of the reason we gather is to collectively deconstruct our white culture habits, mannerisms & entitlements. To have a place to return each year to dig deeper, as repetitive & trivial & confusing as a “bunch of adults” unknotting a species’ propensity for domination & exploitation is… well as far as I’m concerned it’s worth some tries, if not several lifetimes & generations.” The importance of the space that Wild Roots Feral Futures provided was seen, heard, and felt from the time that we came in contact with the campers.

Understanding the impacts of these types of gatherings and their particular reach beyond the status-quo and forming new realities is important to seeing how there is a much bigger world than we are accustomed to in our boxed in social strata. 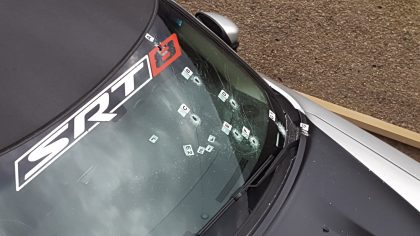 Dion Avila Damon Murdered by DPD With 7 Shots Into Windshield