Denver, CO – After filing a request under the Colorado Open Records Act, Unicorn Riot has received a list of all twitter accounts that have been blocked by the official @DenverPolice twitter handle.

According to Mary Dulacki, records custodian for Denver’s Department of Safety, no Twitter user has been blocked by the @DenverPolice account since 2013 as a matter of policy.

We were provided with a spreadsheet listing the Twitter ID numbers associated with accounts, and using the free online tool TweeterID we were able to identify the current @ usernames tied to each account ID number. Some of the ID numbers may be for accounts that have been deactivated, suspended, or are simply no longer in use, while others may have changed their @ username (if a twitter user changes their @ username, the associated account ID number still stays the same).

Several of the accounts on the @DenverPolice twitter block list, such as @leftdisorder and @StandUpDenver, are associated with social movements in the Denver area. Many other blocked accounts, such as @MyLulzNinja and @AnarchoAnon, appear to be associated with Anonymous.

Perhaps the most interesting and also surprising member of the list is @ColoradoFOP – the official twitter account for the Colorado Fraternal Order of Police, an organization of which many Denver Police officers are members. The Colorado FOP’s approach to public relations and social media has taken a colorful turn in the recent period of increased anti-police sentiment following the Ferguson protests in late 2014.

In February 2015, the Colorado FOP joined other police unions in calling for the resignation of Denver’s Mayor, Police Chief, and Director of Safety after officers were ordered not to engage with a protest march during which red paint was poured on a monument outside Denver Police headquarters (red paint was poured on the same monument, again, on the same date in February of this year).

A few months later, after the Denver Police shot & killed Paul Castaway in July 2015, @ColoradoFOP publicly mocked family and supporters of Paul Castaway, referring to a protest after the shooting as “a gaggle of clowns.” In response to these statements by @ColoradoFOP, an anonymous individual known online as “Acidic404” conducted several Distributed Denial of Service attacks against the Colorado FOP website, taking it down several times over a period of weeks.

We cannot verify that the @DenverPolice twitter account has not blocked any accounts since 2013. However, since we have not learned of twitter users blocked by @DenverPolice in more recent years and we were told by officials that DPD no longer blocks on twitter as a matter of policy, this would appear to be the case.


Unicorn Riot acquired this twitter block list as part of our investigation into the Denver Police Department’s practices of using social media for surveillance and “intelligence gathering“. We will be publishing more reports in this line of investigation in coming weeks. 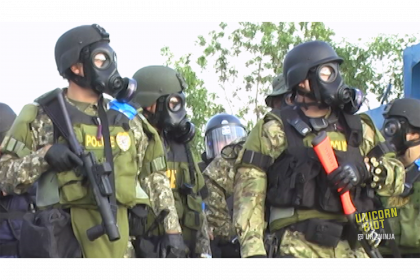