Lincoln, NE – Far-right white supremacists are continuing to use the Discord online chat platform to organize stalking and hacking campaigns against their anti-racist opponents.

In the immediate aftermath of the violence against protesters, ending in the death of Heather Heyer in Charlottesville, VA on August 12, attention turned to methods of communication used to organize the Unite The Right event. A large amount of the central work putting the rally together took place over Discord, a voice and text group platform used by gamers.

With most, or all, of the organizations involved in Unite The Right actively using Discord in their everyday work, the platform has been described as having a monopoly on the internal communications of the modern white supremacist movement. These organizations have been named, along with individuals who planned the rally, in a $3 Million lawsuit from 2 of the people injured when James Alex Fields, Jr. Struck their vehicle.

While Discord closed several servers shortly after Unite The Right and made an official statement denouncing white supremacy, many of the same groups and users continue to openly use the company’s services to organize, plan, and recruit. Unicorn Riot has obtained screenshots and server logs documenting the contents of a Discord server called ‘Pony Power’ that was created on August 17, just five days after neo-Nazi James Fields drove his car into a crowd of antifascist and civil rights marchers in Charlottesville, killing one and injuring nineteen.

The ‘Pony Power’ server was set up by an individual using the Discord username ‘I Am Not A Gerbil’ who repeatedly identifies himself as Nebraska resident Dan Kleve. Dan Kleve, a biochemistry major at the University of Nebraska-Lincoln, attended Unite The Right in Charlottesville and is a member of the neo-Nazi organization Vanguard America. Kleve also runs an online national socialist group called “Racial Theocracy”, for which he was profiled by the Anti-Defamation League earlier this year. ‘I Am Not A Gerbil’ also solicited donations to a Paypal account under the name Dan Kleve in the ‘Charlottesville 2.0’ Discord server.

After Kleve was identified in Charlottesville and exposed online, people began calling the head of his department at University of Nebraska-Lincoln and demanding that he be expelled.

In an apparent retaliation for this, Kleve created the ‘Pony Power’ server to seek revenge by maliciously publishing the personal information of alleged antifascists and encouraging others to harass them and bring them harm. “There was a coordinated effort to get me kicked out of uni,” Kleve wrote in one Discord message. “Plus a bunch of death threats. This is war.”

Conversations eventually progressed to some Discord users discussing cyber-attacks against antifascists, which led some chat participants to express concern about risk of conspiracy charges under federal hacking laws. Some of the first conversations in the ‘Pony Power’ chat server focused on how to create a centralized system for archiving “dox” (sensitive personal information gathered with malicious intent) of alleged antifascists to be targeted by white supremacists.

One user using the alias ‘Timmy Matlock’ claimed to be working with the Daily Stormer to create a central database to store people’s personal information for use in harassment campaigns. Another Discord user under the alias ‘Klaus Albricht’ spoke of his plans to create a Tor hidden site to host such a database. Dan Kleve, referring to people to be listed in this database, asked “Do we go Turner Diaries on them?” – this comment made by Kleve appears to be advocating murder, as he refers to the 1978 novel The Turner Diaries, in which white supremacist insurgents overthrow the US government and exterminate all non-whites on the planet. The Southern Poverty Law Center has referred to The Turner Diaries as “the bible of the racist right.” While many of the earlier postings in the ‘Pony Power’ server focused on Nebraska-area antifascists allegedly behind the attempts to get Kleve expelled from college, the scope of the targeting quickly widened.

Eventually, the users in the chat seemed to target any person they saw ‘like’ anti-racist posts on social media, sometimes going after liberal, Democrat-connected “The Resistance” groups, as well as progressive elected officials. Several senior citizens were also among the list of harassment targets named by Kleve and others.

The white supremacist Discord users in ‘Pony Power’, particularly ‘NSJW’, also expressed a keen interest in targeting reporters, with messages in the chat logs including “we need to make an example out of journalists” and “we need to dox journalists.”

While they identified a clear shared goal of neutralizing anti-racist opposition, users in the ‘Pony Power’ chats appeared to have little to no understanding of the decentralized and leaderless operating principles at work in most antifascist organizing. Chat participants repeatedly stated their goal to identify antifa “commanders” and claimed at various times to have discovered a “chapter leader”, while at other times they bragged about identifying “the man who runs antifa.”

Various members of the chat group also became very excited when one of them claimed to have found a YouTube video providing “confirmation that Antifa is a Jewish run organization.”

A few users in the chat claim to possess some IT skills, at times discussing hacking techniques and describing plans to carry out cyberattacks against antifascist websites.

‘Klaus Albricht’ discussed the possibility of launching a Distributed Denial of Service (DDOS) attack to try to shut down the anarchist news site It’s Going Down. Klaus and another user also discussed carrying out a basic “spear phishing” attack, in which they sent malicious URLs to targets, who would then unknowingly transmit their IP address by clicking the link.

Chat logs suggest several individuals were sent malicious tracking URLs after some of the neo-Nazi Discord users suspected them of being administrators on antifascist websites or Facebook pages.

Another ‘Pony Power’ chat participant, after being told by the user ‘Klaus Albricht’ how to conduct a spear fishing attack, said they would use the method to try to obtain the IP addresses of members of their local chapter of the Democratic Socialists of America (DSA).

It is unclear if any of the spear phishing attempts were successful. Discord user ‘NSJW’, active in earlier chats to assist with Kleve’s harassment campaign, sounded a harsh warning to other chat users that they may be exposing themselves to serious legal risk. ‘Klaus Albricht’ objected to ‘NSJW”s legal concerns, and an argument ensued.

Both the proposed DDOS attack and the actually-carried-out spear phishing attacks mentioned in the ‘Pony Power’ server, could be perceived as violations of the federal Computer Fraud and Abuse Act, passed in 1986.

Many of the potentially incriminating messages appear to have been deleted off the ‘Pony Power’ server, although we were still able to obtain screenshots and Discord history logs of the posts, some of which were taken in real time. Activity on the ‘Pony Power’ server saw a dramatic decrease immediately after the legal discussion exchange, some of which can be seen in above screenshots. There has been little activity on it in during the last week, with a choice few recent messages including a white supremacist sharing a picture of his truck, and another complaining about a temporary ban placed on his Facebook account.

View or download the full slide show of screenshots from the ‘Pony Power’ Discord server below. The screenshots show the full contents of all text channels in the server, although readers will notice many black areas – these are redactions of personal information, photos, and other details of people identified as harassment targets.

Here is a slideshow of the 491 images: 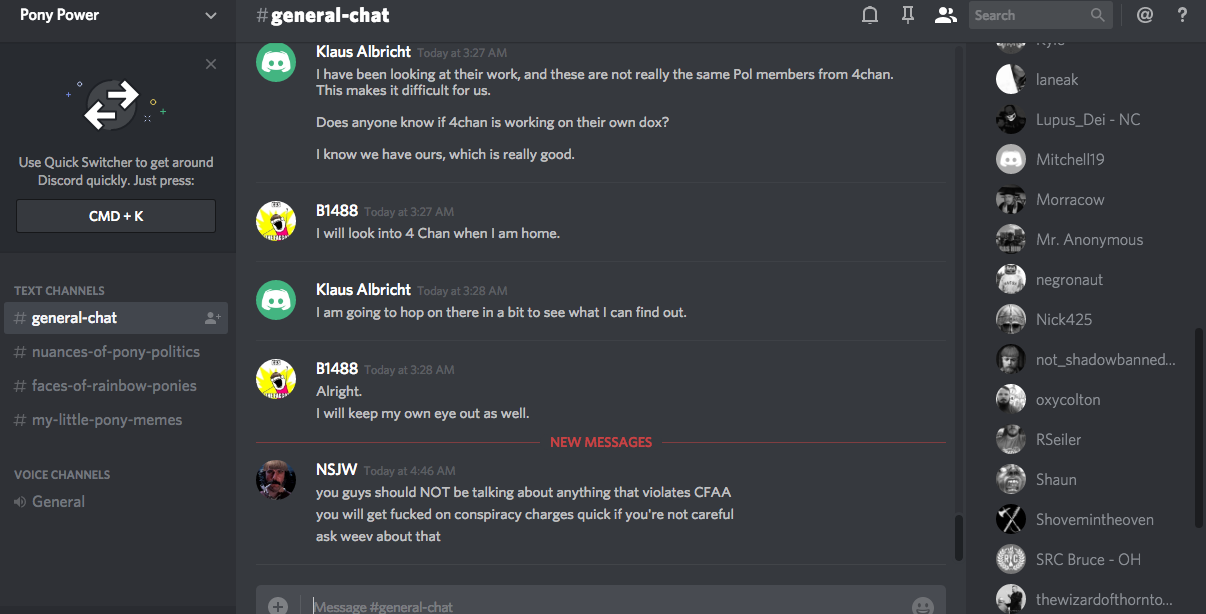 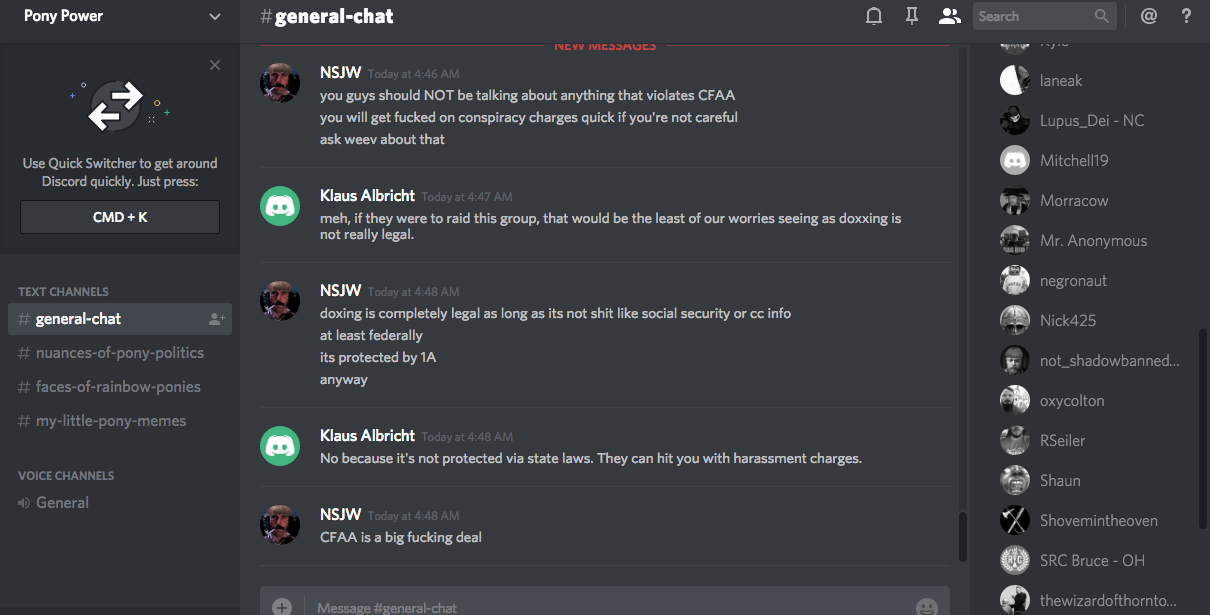 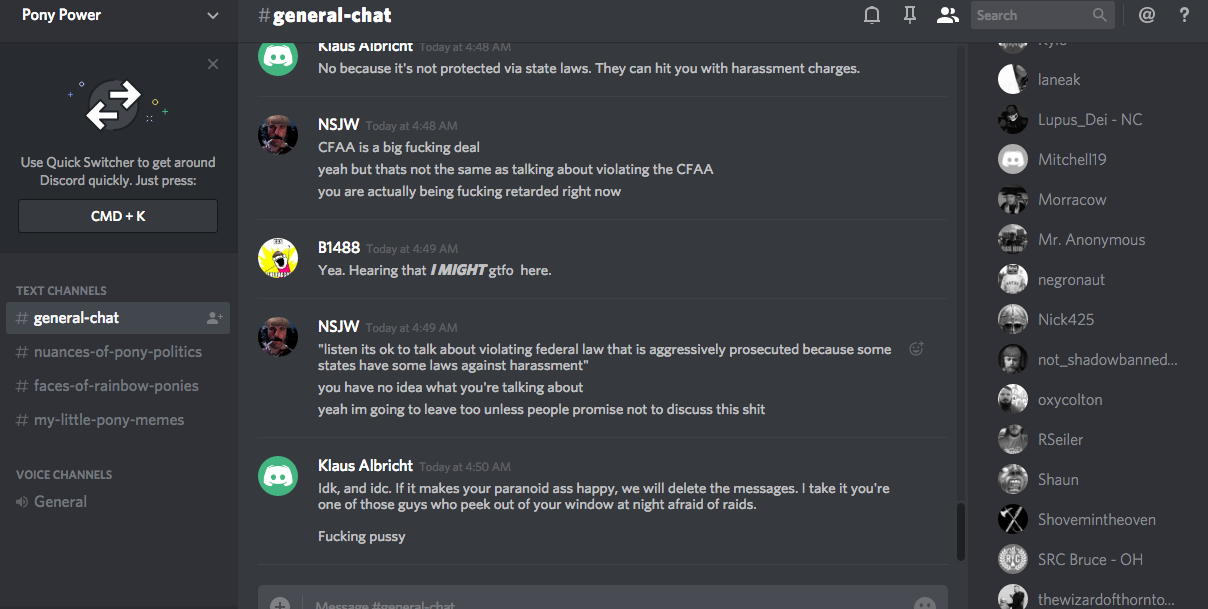 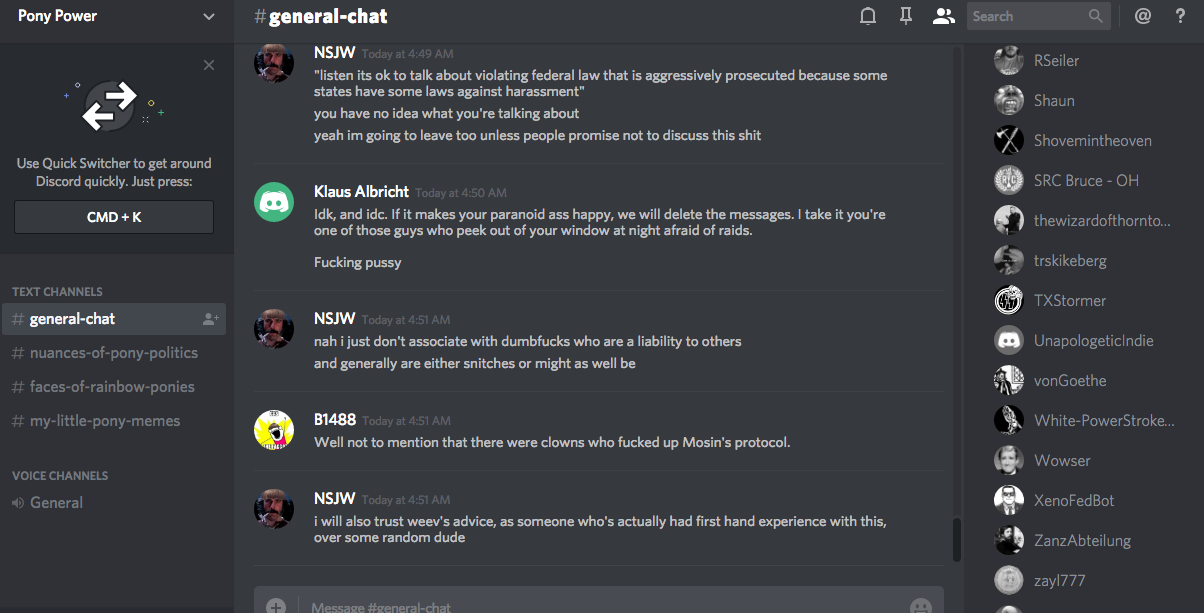 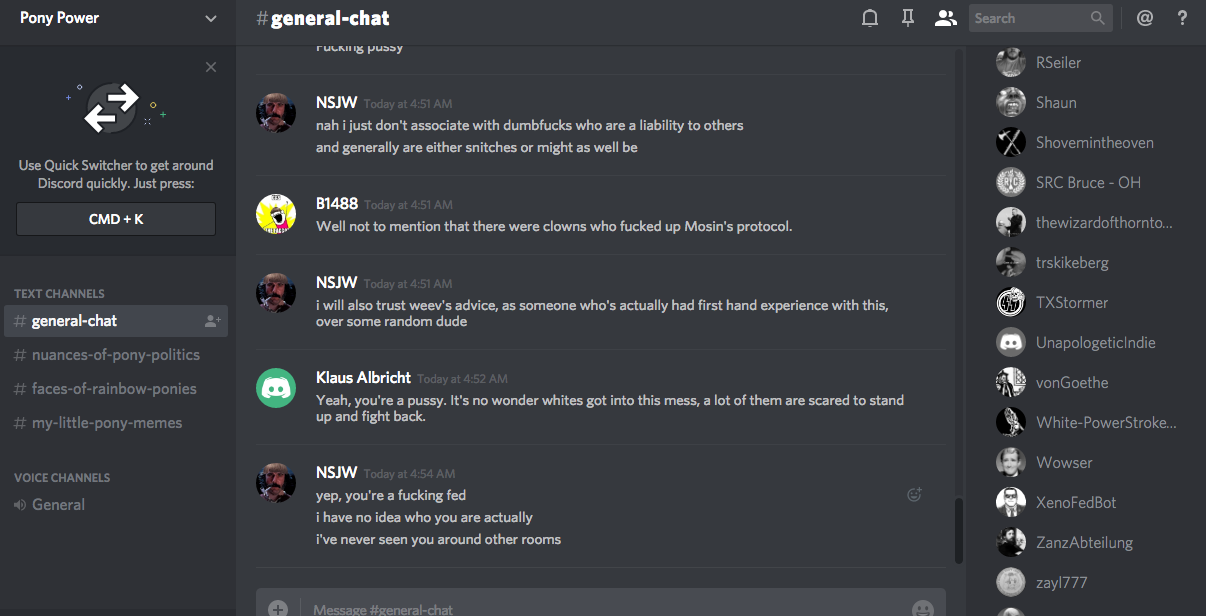 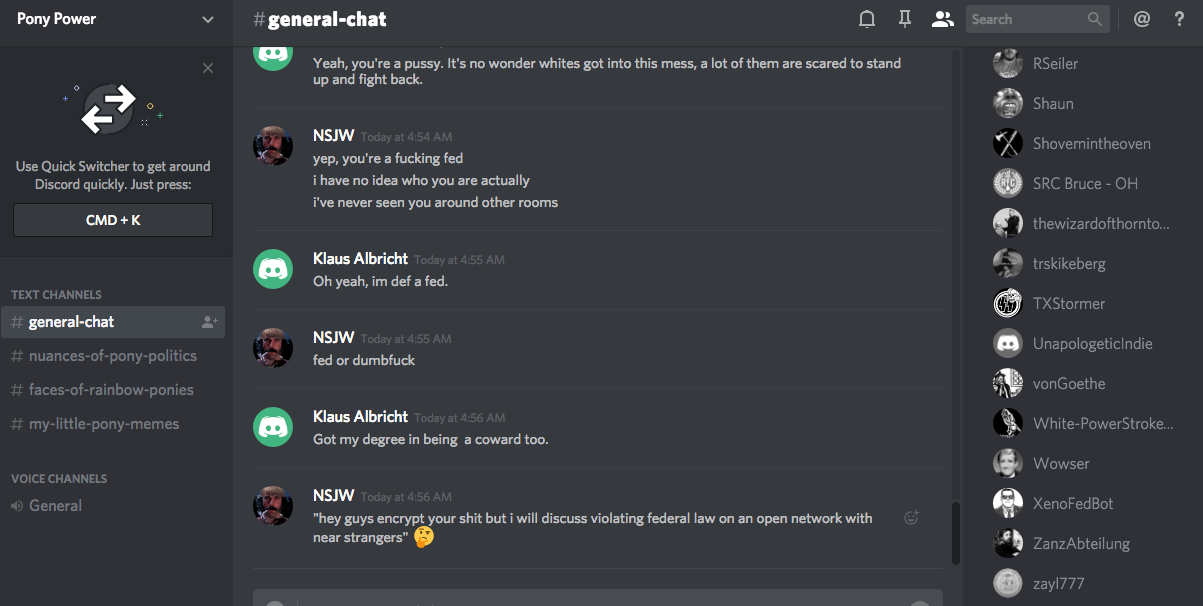 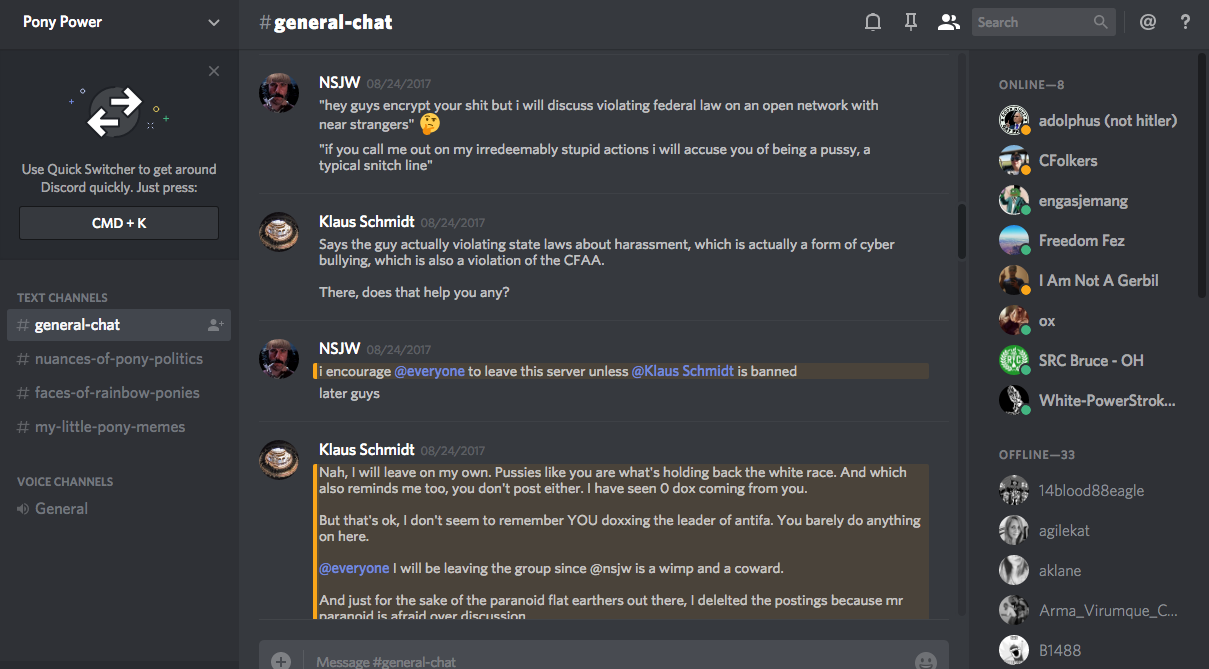 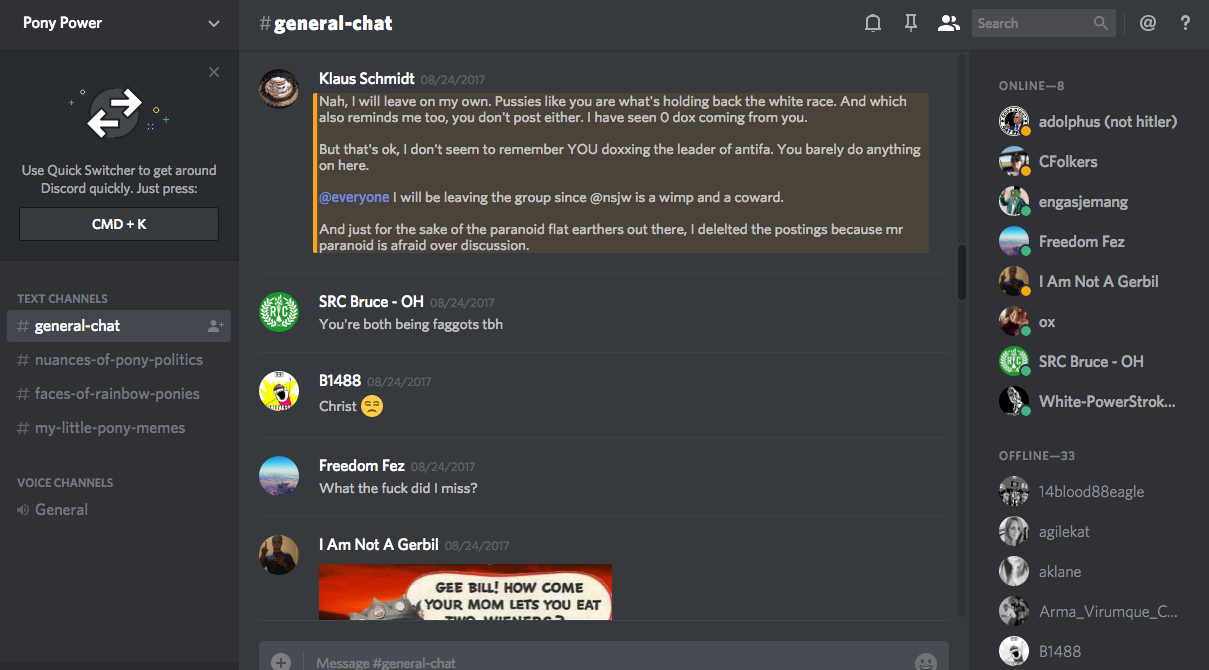 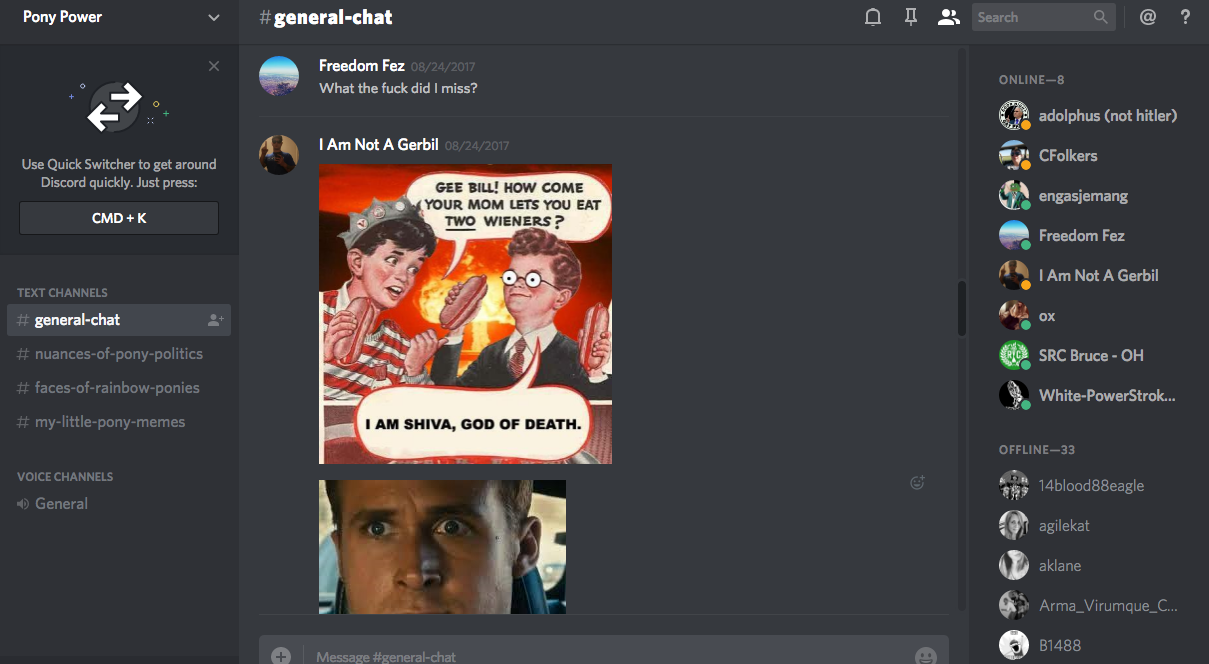 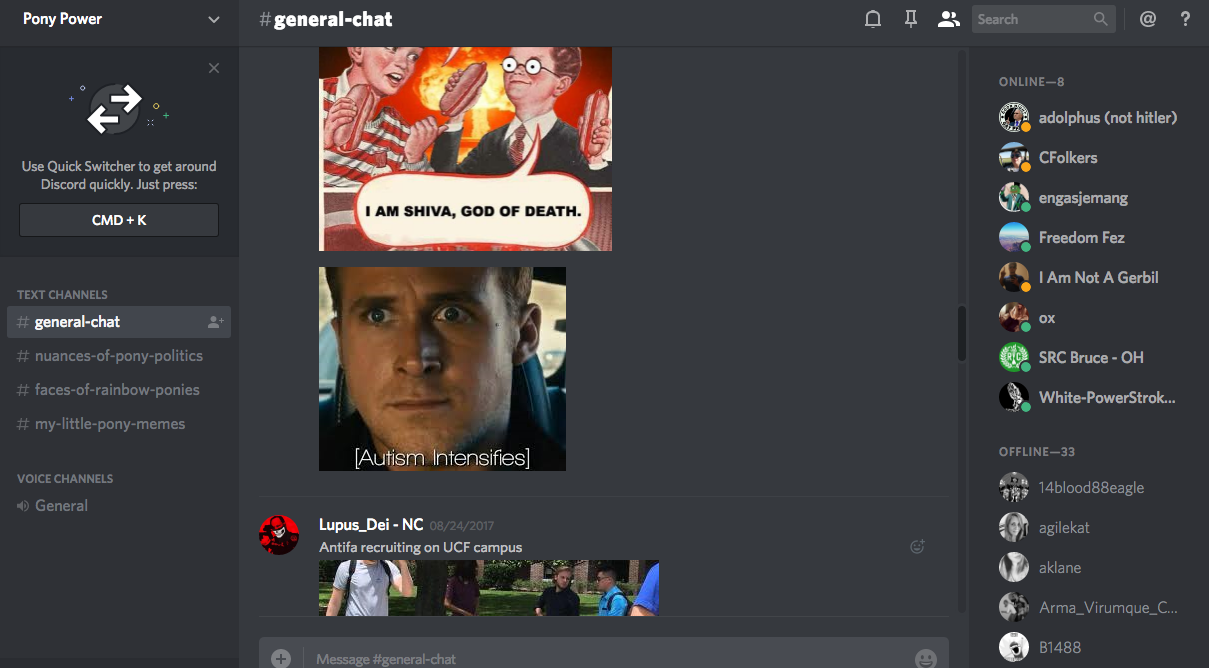 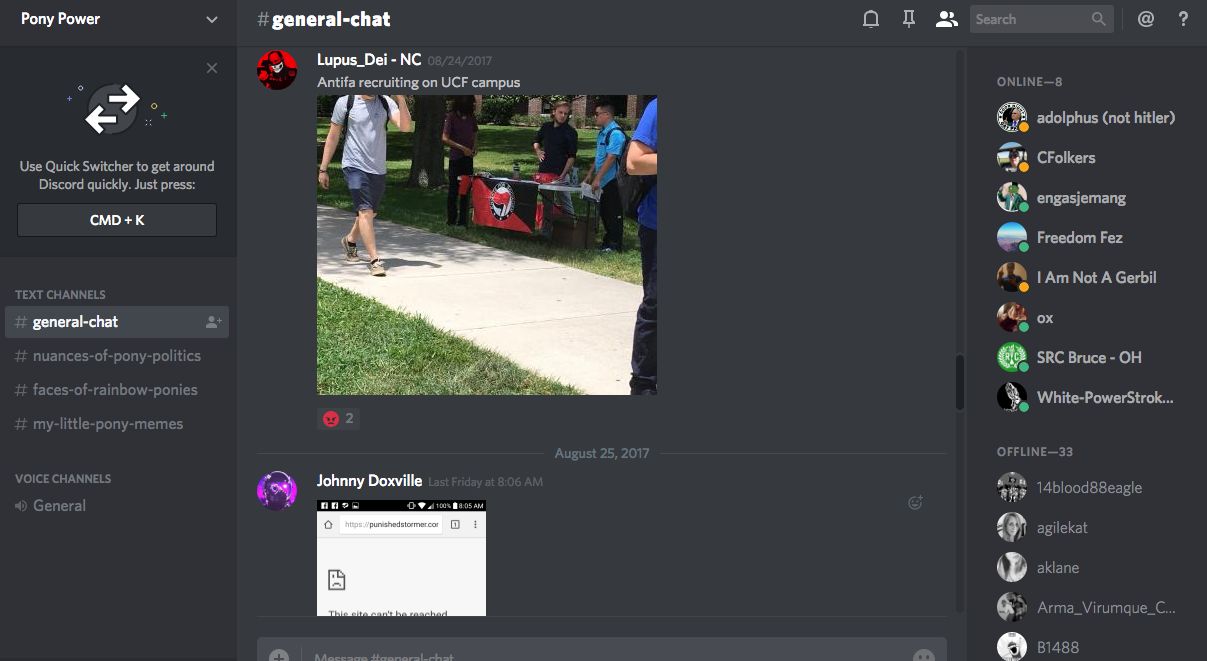 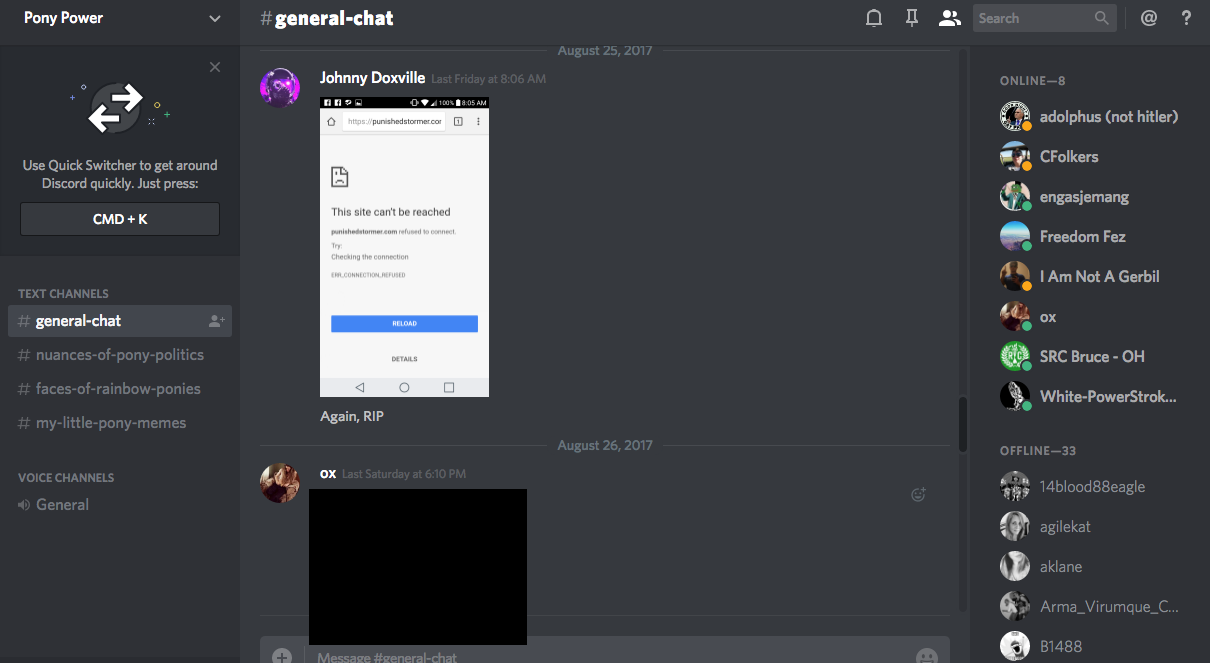 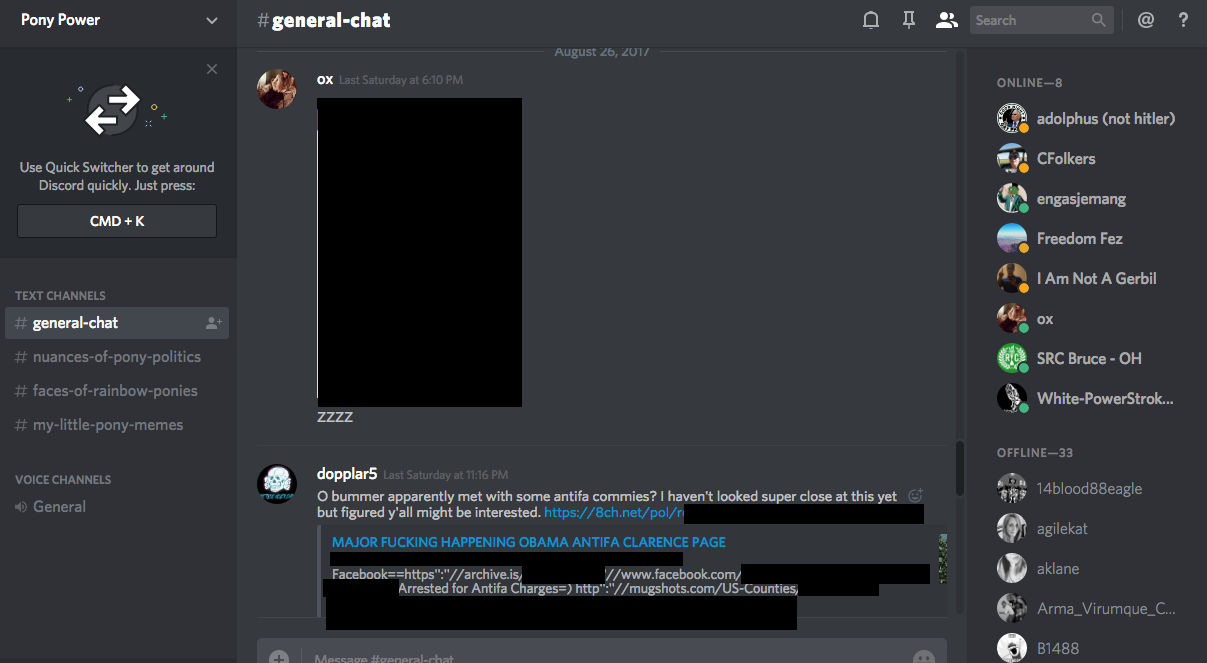 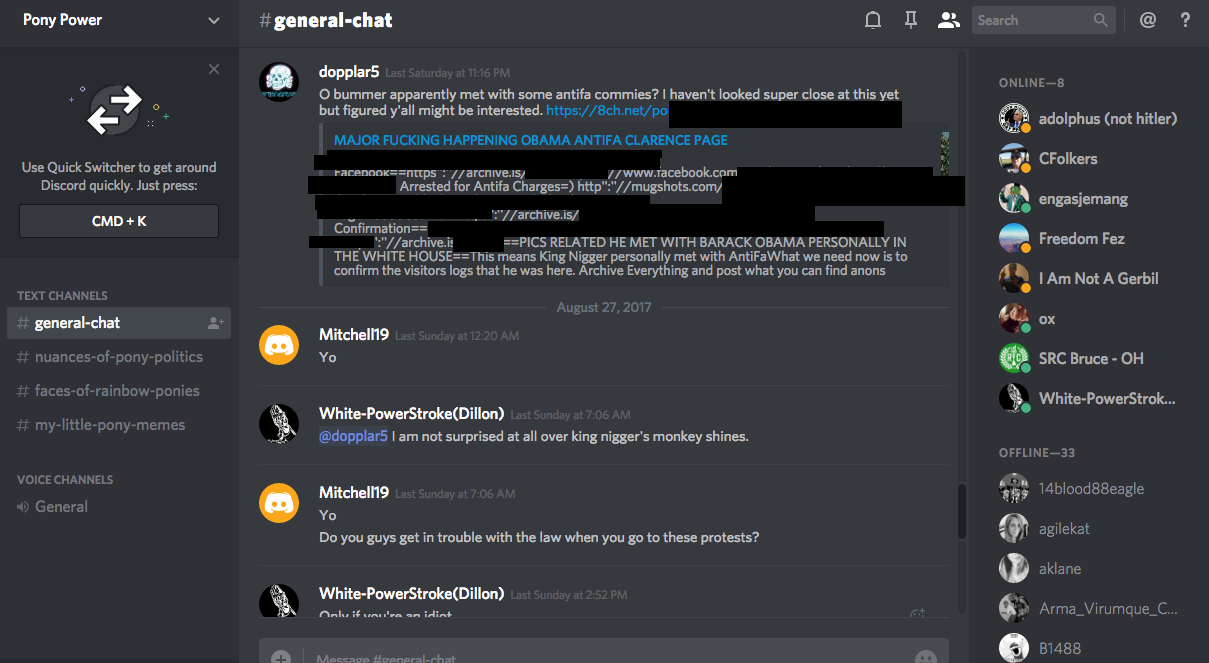 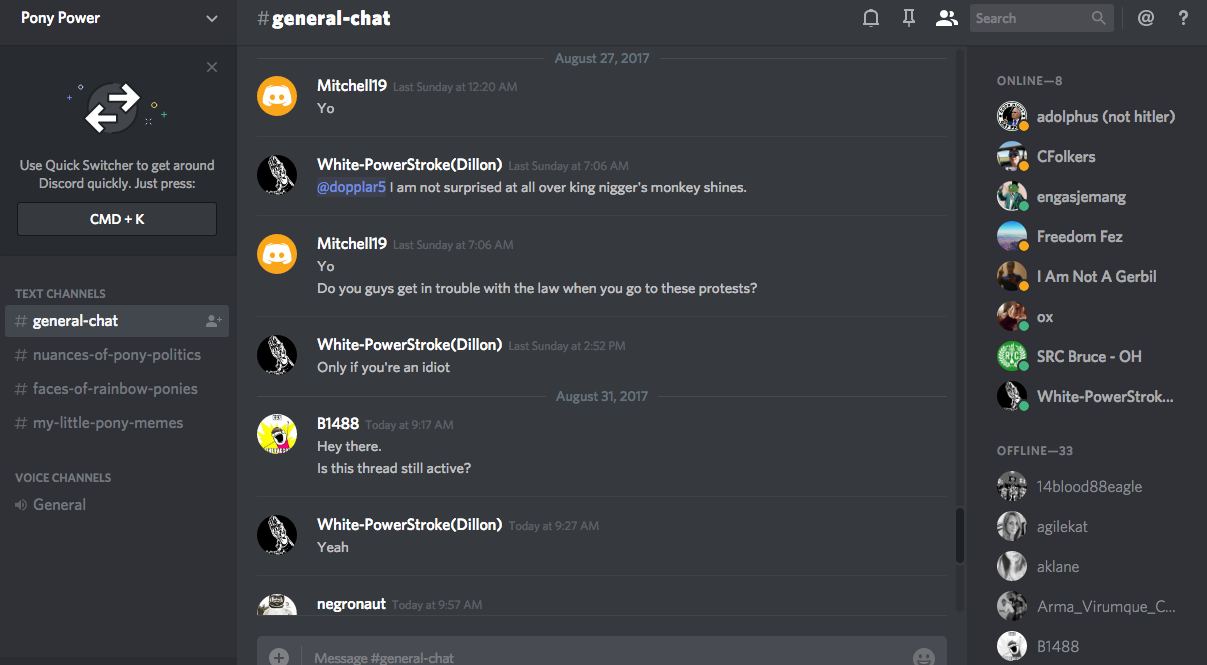 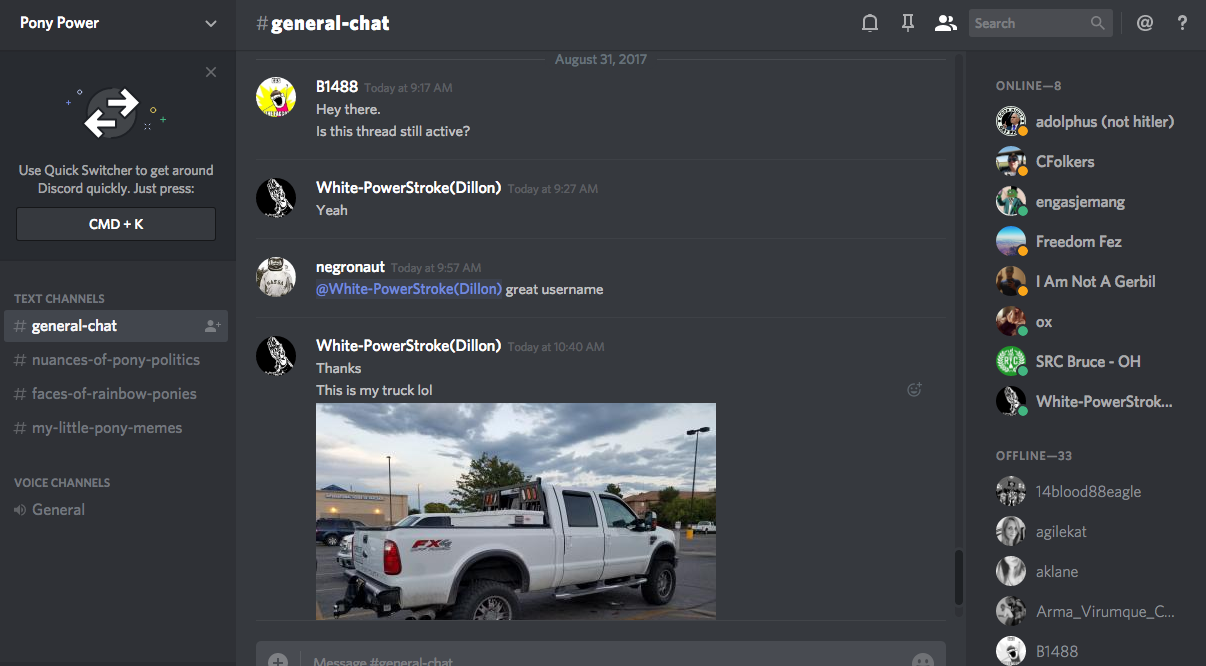 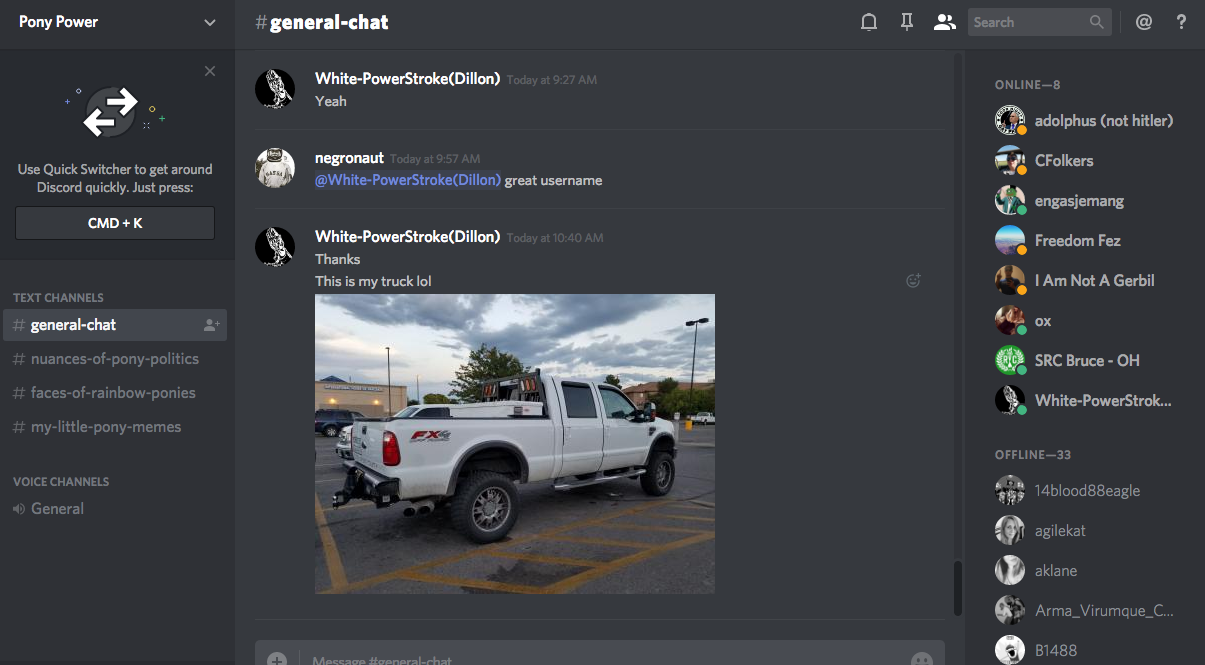 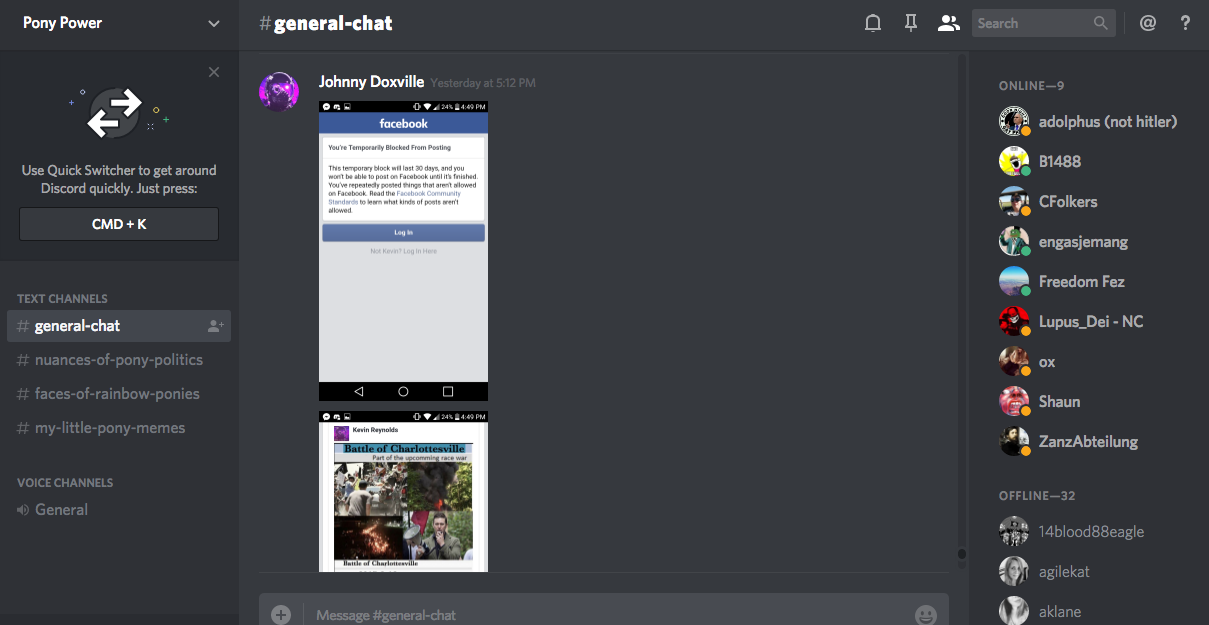 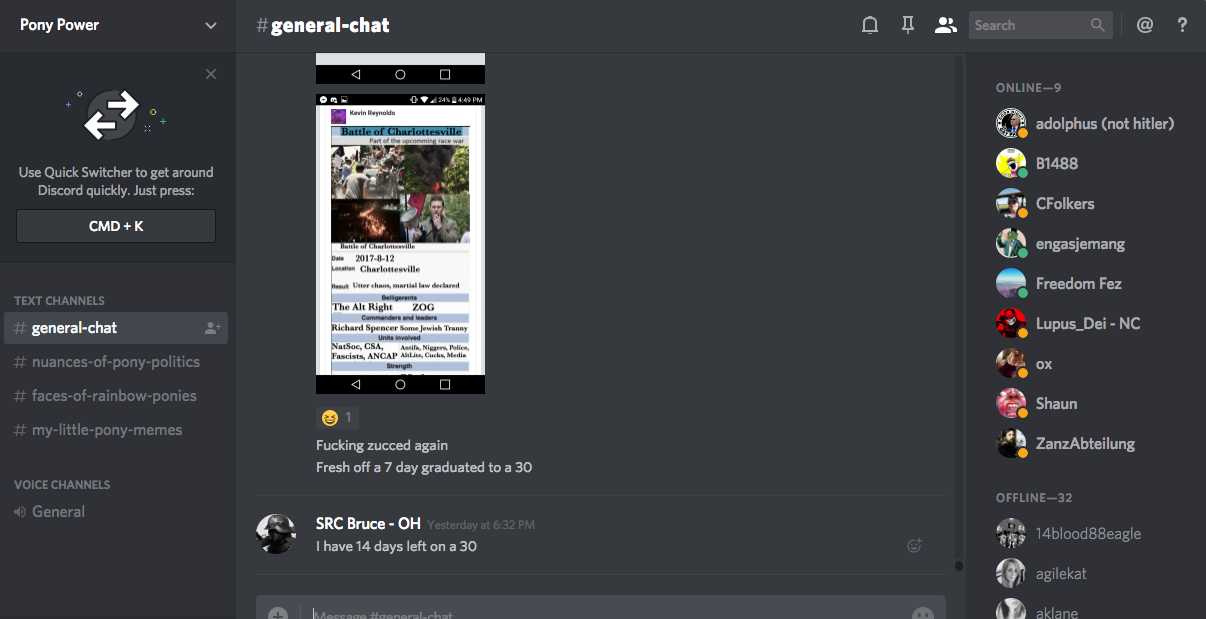 UPDATE (6:30 PM EST 9/5/17): Discord staff have confirmed that they shut down the ‘Pony Power’ server Tuesday night and banned all Discord users who were in the server.

“Discord doesn’t monitor private conversations so needs assistance from our community to shut down those in violation of our Terms of Service…the server and accounts have been removed from the platform. This is an ongoing effort that Discord is committed to and we will continue to take immediate action as soon as we are made aware.” – Discord representative in email to Unicorn Riot, September 5, 2017

Discord has previously publicly stated that they do not use end-to-end encryption, which implies they may have the technical ability to identify and ban servers and users engaged in white supremacist activity. This raises questions about Discord’s statement that they “don’t read people’s private servers,” which may be a conscious business decision to look the other way rather than an inescapable built-in privacy feature. Evidence suggests that dozens of neo-Nazi and “alt-right” Discord servers are still active, with hundreds, perhaps thousands, of white supremacists still utilizing the free group chat service.

New information about how people can avoid these types of neo-Nazi and white supremacist doxing campaigns is available here from equality labs, and further guides from equalitylabs.org (@equalitylabs on Twitter).

We will continue publications of yet-unreleased material from Discord chat servers connected to Unite The Right throughout the rest of September 2017. If you are able, please support us with a donation to allow our ad-free media collective to continue reporting on these leaks.

The collection of our previous Charlottesville & data release posts is here.