Charlottesville, VA – In the months since the Unite The Right rally led to the death of Heather Heyer and triggered a massive backlash, new details about groups involved continue to surface. One of the Nazi-affiliated groups behind Unite The Right, Anti-Communist Action (‘Anticom’ for short), now seems to have played a key role in radicalizing young white men and preparing them for violence in Charlottesville and elsewhere.

This report is the second part of our publications releasing chat logs from the Discord server of the Nazi-affiliated organization Anti-Communist Action, ‘Anticom’, which we received as part of the internal alt-right communications leaks sent to us during our reporting on Unite The Right in Charlottesville.

Anticom has previously described itself as “the right’s response to antifa” and while claiming to be politically ambiguous, has repeatedly expressed a singular intention of opposing anti-racist protesters with organized force. In response to questions sent while working on our first report, Anticom (who apologized for their late response and said they were “pre-occupied with Gainesville“) eventually provided us with a statement clarifying how they seek to define themselves as an organization.

Anticom is a fundamentally reactionary movement which is Anti-Marxist. As such, it’s not National Socialist, Libertarian, Fascist, or any specific ideology. Our members have varying points of view on the political spectrum…. –Anticom email to Unicorn Riot, October 2017

Despite various attempts to represent themselves as ‘not Nazis’, Anticom’s chat logs are generally indistinguishable from various other white supremacist and neo-Nazi Discord servers. In October, a former member of the group contacted the antifascist website It’s Going Down and claimed more hardcore pro-Nazi members of the Anticom organization, some with personal ties to Richard Spencer, are steering the organization.

I was thrown out of [Anticom] because I refused to agree to associate our brand with Richard Spencer…after Charlottesville our leadership decided to become closer to groups like Vanguard America, the TWP, and Identity Europa. I strongly objected that idea but leadership ignored me. I didn’t join the group to be involved with neo nazis…[Identity Europa] and Anticom are considered almost sister orgs... – Former Anticom member, writing to It’s Going Down, October 2017

One user in the Discord chat gave a very succinct explanation of the purpose Anticom serves as an “anti-communist” front for the wider internet-based neofascist movement:

“…we can’t publicly be an IRL group of “white nationalists” or whatever we call ourselves, online gives us anonymity, it gives us the options to escape behind “Irony” or not be held accountable…” – Discord user ‘Chancellor’ in Anticom Discord server #general chat, April 10, 2017 at 3:46 AM

Another Anticom chat user posted a meme that very helpfully illustrates the difference between the rhetoric used by alt-right white supremacists in open versus closed spaces. While Anticom claims to represent “varying points of view,” much of the chat messages appear consistent in ideology across the tens of thousands of messages sent in the server. Anticom Discord users show a particular fixation with antisemitic memes and conspiracy theories about Jews controlling the world. Many postings in the server contain variations on “the happy merchant,” a distorted drawing of a Jewish man’s face long used as a trope in anti-semitic propaganda. On July 14, one Anticom chat participant posted an image of anti-semitic posters they had placed on a synagogue.

Beyond anti-semitic acts of vandalism, many of the messages sent by Anticom supporters cross the line into clearly inciting violence and present serious public safety concerns. Dropbox link posted in Anticom’s Discord user iSpringfield on April contained a folder of manuals detailing how to create various forms of explosives, such as grenades and blasting caps. (In part one of this story, we showed how earlier chats in the Anticom server included a proposed backpack bomb terror attack against antifa protesters.)

Throughout the same month of April 2017, several Discord users in the Anticom servers posted pictures identifying themselves as participants in violent white nationalist street protests in Berkeley, California. These pictures and conversations show how the Discord server served as a way for users to promote violent actions against the group’s stated enemies (antifascists, anarchists, and other leftists.)

The use of Anticom’s Discord server to promote, coordinate, and celebrate violent white nationalist street protests in Berkeley was a sign of things to come. Logs from both Anticom’s server and the ‘Charlottesville 2.0’ Discord server used to organize Unite The Right show that Anticom members played a key role before, during, and after the now infamous event. On July 25, when asked whether Anticom was a group that puts on events, username DeusVolt replied “Yeah, we are even going to the Unite The Right thing…we are one of the bigger parties involved.”

Messages from July 11 show Unite The Right organizers inviting Anticom as an organization to join the ‘Charlottesville 2.0’ planning server used to coordinate for the event.

Chatting in Discord the day after Heather Heyer’s murder, Anticom members discussed her death at the hands of James Alex Fields, Jr. and made comments supporting his hit-and-run attack. Anticom chat username ‘D.iogenes’ wrote “I was just in a debate with someone over why it isn’t ok to punch Nazis.” Anticom leader Seth Vitco responded to the comment with a joking reference to Heather Heyer’s death the day before, remarking “punching nazis will inevitably result in getting Challenger’d…vroom vroom :^).”

A video of a Google Hangouts conversation posted to Anticom’s Youtube channel days after Unite The Right shows several members describing their activities helping with logistics and transporting alt-right VIPs in Charlottesville. (The YouTube channel has since shut down; we archived a copy of the video.)

Anticom members in the Google Hangout complained about problems with infiltration and “optics” during the Charlottesville event, and blamed negative media portrayals of the August 11 torch rally on leftist plants and ‘memes’ that were taken out of context. At one point an Anticom member claims that the car attack by James Fields that killed Heather Heyer was a false flag, calling it “another Sandy Hook.”

The men and women speaking in the Anticom video repeatedly express their sympathies for national socialist politics. They also discuss how they believe their shared enemy of ‘communism’ is the fruit of an international Jewish conspiracy.

Participants in the Google Hangout also repeatedly use neo-Nazi phrases such as ‘Lügenpresse’, an anti-semitic slur used by Hitler’s regime to attack Jewish and non-Nazi press outlets. One Anticom member can be heard to say “hang the Lügenpresse.”

Organizers taking part in Anticom’s Charlottesville report-back also explained how the organization was implementing new standards for members post-Unite The Right. These were said to include fitness requirements, proof of carrying out real life ‘activism’ such as putting up posters and stickers, and a policies mandating ownership of firearms and “riot equipment.” As Anticom organizer ‘Seth’ put it, “we want to be militarized, prepared…for future events like Charlottesville.”

Since Charlottesville, Anticom has continued to encourage its members and followers to show up to right-wing and white nationalist events. One masked man in an Anticom hat was seen following and filming anti-racist protesters in Boston on September 19. In mid-September, Anticom announced it would be holding a March Against Communism’ event in Charlotte, NC on December 28, with speakers including open neo-nazis Richard Spender and Matthew Heimbach. They also told those coming to bring firearms, flags, body armor, and torches for a torch rally to be held after the main event. While Anticom posted online that they had been in contact with police about legal restrictions on bringing firearms to the event, emails we obtained from Charlotte city officials suggest that Anticom never actually contacted city authorities about their planned event. On Thursday, September 28, Anticom tweeted they were cancelling their Charlotte event “in light of safety concerns.”

On Wednesday September 27, Anticom tweeted that their Discord server had been shut down. Discord later confirmed that the chat server had been shut down for violating their terms of service. Anticom has since attempted to start new Discord servers, as well as moving to using the chat platform Riot.im, in an attempt to rebuild the larger user base from their banned Discord server. As of early October, Anticom’s Twitter page suggests the group has had difficulties regrouping their previous numbers since being banned from several online platforms.

The group was also listed as one of the organizations behind the recent “white lives matter” rally in Shelbyville, Tennessee organized by the ‘Nationalist Front,’ a coalition of the more hardcore neo-nazi groups involved in Charlottesville.

Various ‘alt-right’ groups face increasing opposition and crumbling support as the openly violent factions appear to be converging and working more closely together. Anticom now essentially endorses the explicitly Nazi politics of groups like the National Socialist Movement, and its rhetoric seems to have only grown more militaristic since Charlottesville. It remains to be seen how the evidence of Anticom’s role in facilitating far-right political violence will impact their ability to hold events in public.

Click here to browse Anticom’s Discord logs for yourself – we have added almost 90,000 additional messages to the dataset with this publication.

Over the last several months a team of anonymous web developers generously donated their time to create this searchable platform for Discord chat servers with support from Unicorn Riot collective members. It is located at https://discordleaks.unicornriot.ninja. We are pleased to present the first version of this software – there are a few bugs but most of the content is indexed and accessible. We have made redactions to the chat logs to protect the personal information of people identified as targets for harassment; other than these minimal redactions these logs have not been altered. 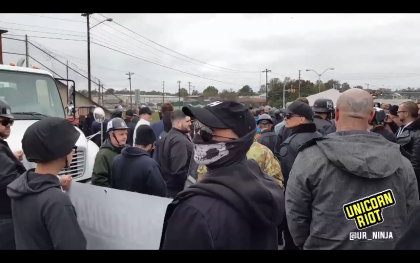 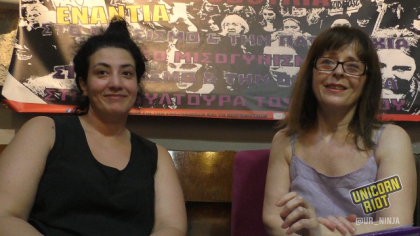 Greece: The House of Women for Empowerment and Emancipation