Athens, Greece – During another year of intense migration crisis in Greece, a self-organized, feminist, anti-fascist, and anti-racist initiative called The House of Women for Empowerment and Emancipation is building networks of mutual aid for detained refugees and migrants.

The House of Women organizes itself horizontally through the use of assemblies, similar to working group meetings. The initiative stands against patriarchy, sexism, trans-phobia, homophobia, capitalism, and other destructive forces.

While documenting many stories in Greece this summer, Unicorn Riot’s Niko was invited to visit with two members of The House of Women, Iris and Xara, and hear about their initiative. Iris spoke to us in Greek during the interview, while Xara spoke in English and translated for Iris. Watch the video below:

Among the varied ways in which they are active in Athens, The House of Women provides mutual aid for detained women immigrants and refugees.

Since 2015, record numbers of asylum-seekers-turned-refugees from war-torn countries such as Syria, Iraq, Afghanistan, and more have streamed across Turkey and the Mediterranean Sea into Greece. The numbers have again spiked in 2017; as of this summer there were nearly “200 refugees and migrants” reaching Greek shores daily.

Many of the refugees and migrants undergo an immense struggle while on the path westward, including being detained in camps that are de facto detention centers near the borders and on the islands and/or winding up in detention centers in the urban areas of Greece for the crime of traveling without national identification papers.

“Women who come, refugees from war, or migrants, who are imprisoned and they are treated like criminals because they don’t have legally issued papers. And this is not their fault.” – Xara, House of Women for Empowerment and Emancipation

The help from the State and the international community for those detained by the State for not having papers has mostly been non-existent. Those who have been filling that void of aid have largely been anarchists and anti-authoritarian community members, who have provided resources, mutual aid, and care to the refugees in Greece.

In Athens, two detention centers with inadequate conditions contain up to hundreds of non-paper-holding women who don’t have support or resources waiting for them.

Some of the women detainees are held for extended periods of time, sometimes as long as one year. Some are allowed to gather the needed government papers upon release, while others are deported back to the country they last came from.

The House of Women sees these realities as something to correct. They have set up networks of solidarity that provide legal, psychological, material, and moral support for the detainees.

“We feel we have to do it because we feel ashamed about the system.” – Xara Solidarity actions outside of the Attica Aliens Police Directorate at Petrou Ralli Street in Athens are held by the House of Women, whose members also regularly go into the detention centers and meet with detainees for three-hour periods of time.

During their visits with the detainees, they keep notes on their cases and organize support and resources for them while they are in the detention centers as well as upon their release.

Inside the walls of the detention center, which Xara calls a “hellhole“, conditions are bad. Simple necessities such as medical care or even toilet paper are often not available. Lawyers are running off with detainees’ money and psychiatric care is needed by many. The House of Women attempts to alleviate these issues.

Xara said their “network is with other comrades from other collectives such as the social clinics” and that they all collaboratively volunteer their time and energy to provide mutual aid in various forms.

Xara and Iris shared about what they called “an awakening” and a “fantastic” experience during a solidarity action wherein they underwent an intense connection with the women on the inside. As members of the House of Women stood outside of the detention center with a newly released ex-detainee, she spoke through a phone call with those on the inside. Those moments sparked the consciousness, said the women.

Xara exclaimed that the assembly members “get power from them [the detainees]“, and Iris said “We don’t help, we exist together.” Iris stressed that they could easily be in the position of those currently detained.

They both explicitly spoke against philanthropy. They said they don’t receive any kind of assistance from the European Union, the country of Greece, or non-governmental organizations (NGOs).

In July, during The Performative Fest of the Commons on Avdi Square, Shayan Ahmed Samad, a former prisoner of the detention centers and a collective member of The House of Women, tells a bit of her own story of being imprisoned for over five months for not having papers. Check out the video below.

“What we want from the people is just to be human with us.” – Shayan Samad

Although they primarily create networks to help women refugee detainees, The House of Women also helps men. We witnessed an instance of this help during a communal kitchen gathering at Syntagma Square, where members had set up a table to collect material support for the detainees.

A houseless religious refugee from Pakistan was seeking support and came to the table of The House of Women. The video below shows the exchange between him and Xara and Shayan as they attempt to provide him support:

Being active within social justice work and social movements brings many challenges. One of the biggest of those challenges is personal relationships and dealing with the social aspects involved with different personalities being in the same struggle or organizing in the same spaces.

They spoke about the difficulty of staying together as a collective when others have personal interests at stake, and that the assembly works to be open for all individuals to be involved, but they are also weary of those who have their own agenda.

The House of Women is not open to “macho men or fascists“, they said and they spoke about empowering women to push away people “who implement violence” on them.

Iris said she participates in the Embros Theater Assembly as well as the Assembly for the House of Women, and that challenging patriarchy in the theater is important because she is an actress and “wants to act in a free theater.” [see update at end of article]

She said that they fight against rape culture and its associated behaviors within the theater and their assemblies, and that members are learning every day and self-educating each other to communicate better with each other and become better humans.

As far as an operating budget, they have none; they collect donations of supplies and money. Xara spoke about donations and support coming from a Berlin-based queer collective called Dis/Tanz, who helped raise money through a dance party fundraiser for the House of Women in Athens as well as for TransHome, a safe house for trans folks in Istanbul, Turkey.

On November 1st, 2017, refugees demanding reunification with their families went on hunger strike in Syntagma Square in Athens. The House of Women has coordinated days of painting with the children of the hunger strikers.

In efforts to set up networks of solidarity for the refugee detainees, The House of Women are also educating the public about the situations behind closed doors in the detention centers.

“We’ve got to open our heart and our brain, our body, our self, from local to global.” – Xara

Watch the full interview with Iris and Xara below (this will be updated soon):

For further Unicorn Riot reports on refugees in Greece, see ‘Action of Solidarity With Squats and Against Evictions‘ and ‘ADYE, Exarcheia’s Free Self-Organized Healthcare Clinic‘ that provides free healthcare services for refugees in Athens, as well as our special on Greece’s First Housing Squat for Refugees & Migrants, Notara 26. 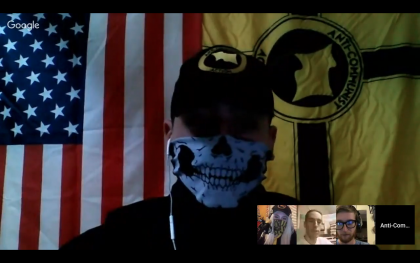 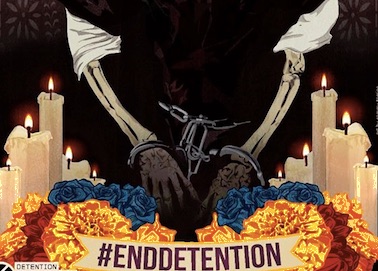