Boulder, CO – The Proud Boys, an organization that has been referred to as “the alt-right’s weirdest new phenomenon“, held a “Free Speech” rally in Boulder, Colorado on Saturday, June 3.

Their founder, Brooklyn-based media executive Gavin McInnes, has gone on record reflecting on his antisemitism and European Holocaust denial. As far back as 2003 the New York Times described his views as “much further to the right than the Republican Party. His views are closer to a white supremacist’s“. He states “I love being white and I think it’s something to be very proud of. I don’t want our culture diluted. We need to close the borders now and let everyone assimilate to a Western, white, English-speaking way of life.”

On Saturday, while being herded into their safe space set up by the Boulder Police, the Proud Boys were met with boos from the crowd. Smoking fireworks were shot into the bushes surrounding the courthouse. Members of the Proud Boys have been adamantly denying any racism, antisemitism, or homophobia as inherent to their group, however, several neo-Nazis living in Colorado, who frequently post on the Daily Stormer, “an American neo-Nazi and white supremacist news and commentary website,” were welcomed into the barricaded rally.

Anti-gay slurs and antisemitic jokes and comments were heard coming from the penned-off area. Occupy Boulder shared a video where chants of “Nazis are people too” can be heard as well as a joke of how it “reminds me of an oven it’s so hot out here” in an obvious attempt to invoke the Holocaust.

In December 2016, William Planer was the subject of fliers distributed in Denver’s Capitol Hill neighborhood where he resides, alerting neighbors that neo-Nazis were living nearby. He took part in Saturday’s Boulder event wearing a “Proud to be Fascist” t-shirt with the Totenkopf SS skull image. The counter-protesters outnumbered the Proud Boys by 10 to 1, with approximately 300 to their 30 or so; however, it was hard to determine how many had planned to attend beforehand, versus how many had arrived on-scene while strolling along the Pearl Street Mall and then decided to stay to show support for the counter-demonstration.

Some of the chants/statements shouted from their “Free Speech” zone were “Free abortions for liberals”, “All lives matter”,  “Walls work”, “That is the star of Jewish supremacy”, “Starbucks is not a job” and “Speak with your balls”. The rally was scheduled until 3 p.m., however, it ended abruptly at 1 p.m. with no announcement as to why they were ending two hours early. A national member of the Proud Boys stated to us later that the event ended after organizers realized that Planer was in their midst and that the Colorado chapter left due to not wanting to be associated with him.

And while it isn’t visually clear who is being “disavowed” in the below twitter video, someone on the megaphone can be heard shouting “this man has been disavowed” and this video has been shared by Colorado Proud Boys in an attempt to prove they were not working in conjunction with the neo-Nazis attending their rally. The woman who arrived with William Planer, who appears to be his partner, is visible in the shot.

Other locals speculated that the event ended early due to the overwhelming opposition to their group.

The attendees of the rally started filing out with their police escort through the courthouse. Counter demonstrators marched together along the side of the courthouse to meet them as they exited out the back. At this point there was minor confrontation between antifascists, using a black bloc tactic, and Boulder Police.

One group of Proud Boys, who were later identified as being from Colorado Springs, started moving quickly down the street and were followed by kids on skateboards who were yelling “fuck you Nazis, get out of here,” among other insults. The kids followed the group of Proud Boys through the parking garage and were joined by others when a confrontation ensued.

It appeared that the group of Proud Boys in the truck bed pulled out a can of pepper spray in an attempt to spray an individual behind their truck. However, in a video it appeared they ended up dropping the canister and the cap popped off after hitting the ground. The canister was then pressed upside down onto the back of the truck tailgate, spraying everyone in the back of the truck. As the truck pulled away abruptly a camera appeared to have fallen out of the vehicle as well. The truck sped off, running a red light, and was not seen returning for the dropped camera.

Footage taken off the dropped camera surfaced online later that day, and shows the Proud Boys shouting racial and homophobic slurs (such as ni**er and fa**ot) at the skaters, as they flee the parking garage.

#Boulder rally scheduled until 3pm ended early at 1pm. Kids on skateboards yelling “Fuck you” chased #proudboys out of the parking garage pic.twitter.com/k2k0dV4R7t

The interaction prompted a “life comes at your fast” tweet by @KrangTNelson.

life comes at you fast pic.twitter.com/fJt8NLX0HQ

A local had this to say regarding the overall dynamics of the day:

Don’t let anyone tell you there wasn’t violence in Boulder today. Besides escorting literal fascists (donning three percenter flags, blue lives matter bullshit, literal swastikas) to their protected area through the courthouse like VIP and arresting only our side, cops in riot gear got mad thanks and love from old white hippies donning literal tie dye. One cop almost started to push a hippie in front of me then visually realized he was breaking character and thanked the liberal fellow white supremacist for “understanding we want you safe” but he couldn’t shake the hippie’s hand cause he was holding a pepper spray gun. Boulder came through strong to oppose the normalization of white nationalism and disrupt literal fascists organizing and holding the space, but if we are being real, there was more diversity of the strains of white supremacy on display than principled anti-fascism.” – Anti-fascist demonstrator

Boulder is known for its peaceful reputation and has been cited over the years as a haven for hippies. After the event one local shared this comment on the Colorado Proud Boys event page, referencing a Boulder belief that the creek keeps on flowing regardless of petty human activity: Comments were heard from both sides about plans for attending the upcoming “March Against Sharia” in Denver this Saturday, June 10. This anti-Muslim event is being hosted by ACT, an Islamophobic organization promoting bigotry against Muslims as part of a national call out on Southern Poverty Law Center’s hate watch list. The primary organizer has a history of posting anti-Muslim propaganda to their social media pages, but insists the event is centered around human rights issues. And Neo-Nazi Billy Roper is organizing the ACT event on June 10 in Arkansas. In Denver, a counter demonstration is planned to support Muslim communities, as well as a vigil for the Portland murder victims who were stabbed by Jeremy Christian while shielding two young women of color from his racist attack.

Unicorn Riot will be covering the events. 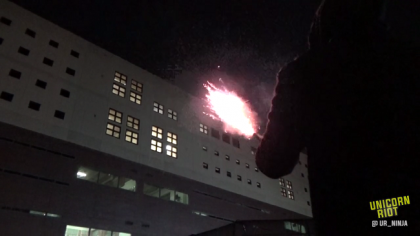 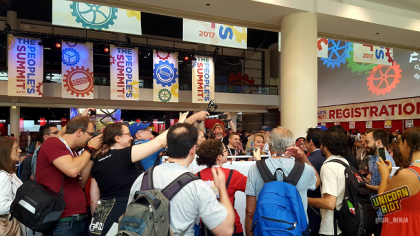