Athens, Greece – Riot police had bombs, molotovs, and rocks thrown at them as the community of Exarcheia defended its autonomous zone in Athens, Greece on June 29, 2017. It is reported that two riot police were injured and no arrests were made.

The Poasy police union had earlier in the week planned to enter into Exarcheia and hold a public meeting in Exarchion Square to speak about anarchist attacks on police. This public meeting got mocked by anarchists who threatened to march into the upscale neighboring district of Kolonaki.

The after effect of a week long political debate was a ban on all gatherings in Exarcheia and Kolonaki from 6 a.m. to midnight on June 29.

This ban was ignored by anarchists and other anti-authoritarians who attacked riot police that were stationed around Polytechnic University. Police threw dozens of CS gas canisters throughout the night, leaving full blocks exposed to the burning gas. Flash bang grenades and other crowd control devices were also used by the police.

Continue to follow Unicorn Riot, as we have much more media coming soon from Greece and beyond. 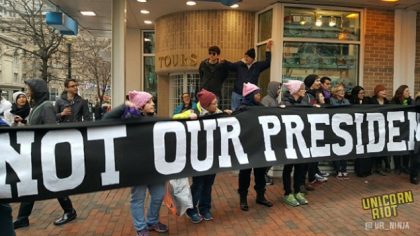