Gainesville, FL – Thousands of protesters converged outside the Phillips Center on University of Florida campus early Thursday afternoon ahead of the scheduled private speaking event booked by Richard Spencer and his white supremacist National Policy Institute. Hundreds of police were also on hand, as just days earlier Florida Governor Rick Scott had signed an emergency declaration to authorize the deployment of extra law enforcement from around the state.

University administrators and law enforcement drew criticism ahead of the event for plans to allow Spencer’s hand-picked staff to take control of ticketing and security for the event, which protesters said violated the University’s events policy. Many people present on Thursday reported that Spencer’s security relied on racial profiling to eject suspected protesters from the event; one reporter also tweeted that she was not allowed to enter the event because she was with her black colleague.

Most of those who attended the event in support of Spencer appear to have been let into the venue before it became open to the public; most, or all of those who received tickets and came inside after doors opened were either protesters or members of the press.

Here's Richard Spencer's core audience. No, I'm not kidding. Rest of the audience is media and protesters. pic.twitter.com/ES5fyGK9BA

As supporters of Spencer were seen entering or exiting the event, they were swarmed by anti-racist protesters seeking to confront them, and had to repeatedly be evacuated from the area by militarized police officers.

Protestors swarmed around a man coming out of Spencer's speech. He hopped a fence in the protest zone. #SpenceratUF pic.twitter.com/fKcsvjUqtJ

As Richard Spencer took the stage inside, dozens, perhaps hundreds, of protesters chanted to drown him out.

Videos posted to social media seem to show that most of Spencer’s talk consisted of him berating the audience, mostly protesters who he called “childish antifa”, as they continued to heckle and boo him throughout the event.

This is getting so funny pic.twitter.com/RkkVWRdmf1

Spencer then invited the crowd to line up for a question and answer “dialogue”; the vast majority of audience members who took the mic expressed open hostility to Spencer and his white nationalist cronies, with statements including “Fuck you!” and “Why did you come here?”

Crowd goes wild when young woman asks Richard Spencer how it felt to get punched in a face pic.twitter.com/Jn9O83FCVd

After being unable to speak over the large unruly chanting crowd, Spencer and company ended their event before its scheduled conclusion at 4:30 PM. Organizers of the #NoNazisAtUF campaign told reporters they considered their efforts on Thursday to be a success.

Chad Chavira, one of the lead organizers for No Nazis at UF, talks about how the day went #SpenceratUF pic.twitter.com/JINHDj9z6A

In the leadup to Spencer’s appearance, the neo-nazi website Daily Stormer published a list of targets associated with Gainesville’s black and Jewish communities, and encouraged its followers to attack and intimidate them with “flash protests.”

About an hour after Spencer’s event ended, three men were involved a shooting incident which lead to their arrests. The men, who carpooled from Texas, drove up to a group of protesters who were sitting and talking, and began taunting them with Nazi slogans. One of the protesters allegedly hit their vehicle with a baton, to which brothers William and Colton Fears reportedly responded by yelling “I’m going to fucking kill you” and “shoot them.”

William Fears, known to many for his prolific role in Texan neo-Nazi organizing, was seen repeatedly attacking antifascist counter-demonstrators at Unite The Right, often using a flagpole as a weapon.

UPDATE: On October 21, two days after Spencer’s Gainesville appearance, Atlanta Antifascists published an internal document they obtained outlining the official alt-right security plan for the October 19 University of Florida event, entitled “Operation Gator Operation Order.” The document contains highly militaristic language which strongly suggests the author, who refers to themselves as ‘commander’, is from a military background. The document describes police and school administrators as “cooperating with” the white supremacist event planners and refers to anti-racist protesters as “opposition forces.”

The document also describes a security “detachment” called “Task Force Vandal” comprised of “primarily members of Identity Evropa, The Florida Gators and Patriot Front. It may be augmented by individual members of [Commander Thomas’ Group], League of the South, Identity Dixie, Anti-Comm, TRS [The Right Stuff podcast], Stormer Book Clubs and others.” Also described is the assignment of “personal security details” (PSDs) to bodyguard white supremacist VIPs; required uniforms for “Security and Support personnel” are also described in detail.

The document also reveals the identity of several key white supremacist “alt-right” personalities who helped Richard Spencer put on the event. Identity Europa leader Eliott Kline (who goes by ‘Eli Mosley’), who is currently facing multiple lawsuits for his role in coordinating paramiitary violence at Unite The Right in Charlottesville is mentioned by name as an organizer in the “operation order.” Another organizer mentioned is alt-right ‘XO’ (military slang for ‘executive officer’) Greg Ritter, a pseudonym recently exposed by antifascists as Gregory Conte, a Maryland resident who works as a corporate staffing consultant. Conte’s name is tied to a company called “Tyr 1 Security” which is also connected to Brian Brathovd, a neo-nazi close to Richard Spencer who we recently exposed as an active duty soldier in the Alabama National Guard. Brathovd’s alias ‘Caerulus Rex’ is also mentioned in the operational document as an event organizer; it is possible the Brathovd was directly involved in organizing security for Spencer in Gainesville while still actively serving in the military, which is an explicit violation of National Guard and Army regulations.


UPDATE (November 7, 2017): Through a public records request, Unicorn Riot has received 567 pages of emails sent to and from University of Florida administrators regarding Spencer’s appearance in Gainesville. Many of the emails consist of conversations between University officials and Cameron Padgett and Evan McLaren of the white supremacist National Policy Institute. You can read the emails below or click here to download the PDF. 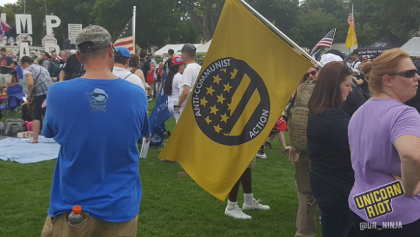