Minneapolis, MN – Mere hours before the Super Bowl LII kickoff, activists used lockboxes and U-locks to blockade a light rail station just blocks away from the Super Bowl venue, US Bank Stadium. The blockade opened space for Black folks to deliver demands, explain what ‘Black joy’ means to them, dance, and chat. 17 people were arrested, booked, and released with citations.

Unicorn Riot was live during the action. Check out our tweet thread of the action by clicking into the tweet below.

Activists from the Black Visions Collective organized the action which featured a caravan to the West Bank station, where folks ran to the light rail platform and locked arms stopping light rail traffic for two hours.

Donning black and yellow shirts reading “You Can’t Play With Black Lives” on the front and “No More 45” (a reference to Donald Trump) on the back, the groups split into three. One group held space on each side of the light rail platform and one group provided press with choreographed speeches and dances of resistance. At one point the speakout group took a knee, saying “We stand with Black athletes that kneel for Black Lives.”

“We stand with Black athletes that kneel for Black Lives”

We were #LIVE for the action – watch here: https://t.co/0Z5JxEKGVZ pic.twitter.com/4GUEa2KUq9

The action extended the full length of each light rail platform, east and west. People’s arms were locked together using lock boxes; three people also attached themselves to the fence with U-locks around their necks.

We spoke to two people with bike locks around their necks to see why they were putting their safety on the line. One of them told us they were locked at the neck to “stand up against the corporate greed” that the Super Bowl represents.

They said they were protesting how the city has diverted public resources into a private, corporate event and demanding allocation of resources to the “people that live here, the homeless people, the people of color, the trans folks, the queer folks, and everybody who is vastly more deserving than anybody who is in that stadium right now of the resources and the amount of money contributed.”

Divestment from police was the main demand and continual focus of the action:

“Divest from policing. Put that money in communities so we can take care of ourselves. We don’t need law enforcement, we need people to be able to take of themselves and they’ve been denying us that.” – Jason Sole

The crowd gathered at the light rail blockade read demands, spoke about what ‘Black joy’ means to them in a dance-off type of circle, and sang songs during the time it took for authorities to craft a plan to extract the people with lock boxes who were blocking the train tracks.

#BlackLivesMatter protesters have been dancing and chanting as they blockade the light rail near #Minneapolis #SuperBowl stadium. They’re calling out city officials for de-investing in black communities while overfunding police https://t.co/OgE1ozvv9s #SuperBowl52 #SuperBowlLII pic.twitter.com/QdcCCtLA4H

“The mandate for Black people in this time is to avenge the suffering of our ancestors. To earn the respect of future generations. And be willing to be transformed in the service of the work.”

One of the many powerful statements made during #SBLIIBlackOut action b4 #SuperBowl pic.twitter.com/ta6ccxQJsB

“…Imagine our bodies not used as currency on the field, in prisons, or at war.

Firefighters taking orders from Metro Transit police officers moved in on the group and began cutting through the lockboxes. Authorities had some difficulty removing an individual who had U-locked themselves to the fence, but they eventually managed to extract all of the blockaders. Physical actions by law enforcement to dismantle the blockade lasted about thirty minutes start to finish.

All of those that were arrested had their possessions inventoried and were placed into flex cuffs and loaded onto a Metro Transit bus. They were brought downtown, booked, and released from custody with a citation.

All of those arrested during today’s #SBLIIBLACKOUT #BlackLivesMatter action in #Minneapolis just hours before the #SuperBowl have been released from custody with a citation.

Watch the stream from that shows their arrests: https://t.co/0Z5JxEKGVZ

Watch the livestream of the action below:

As the action on the light rail was coming to an end, another action was happening on the Southside of Minneapolis at Peavey Park, about 15 blocks from the US Bank Stadium. The crowd of hundreds gathered for the ‘anti-racist anti-corporate’ march, headed north towards the Super Bowl venue, and crowded outside of an entrance to the stadium, making it almost impossible to get in, with attendees seen squeezing in between protesters to get through.

Some #SuperBowl attendees had to press through a tight-pressed group of protesters standing in the way of an entrance to US Bank Stadium. The march is now on the move again, and we’re live on the scene: https://t.co/OgE1ozvv9s #SuperBowl52 #SB52 #SBLive #SuperBowlSunday #SBLII pic.twitter.com/9SffTcWpPr

Marchers all ‘took a knee’ en masse, as have NFL athletes Colin Kaepernick and others in protest against racism (because of such acts Kaepernick remains unsigned by the NFL).

After holding space outside the stadium for a while longer, the large crowd of protesters marched away and eventually dispersed. Unicorn Riot was live for the event:

Check out all of our Super Bowl coverage in the links below: 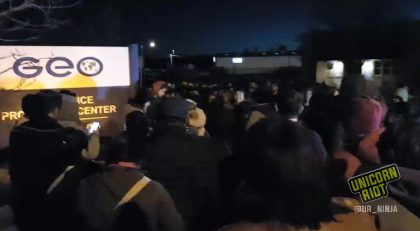