Washington, DC – Today the Department of Justice announced that a grand jury has returned an indictment against 21-year-old Ohio resident James Alex Fields in connection with a deadly car attack against anti-racist protesters in Charlottesville, VA on August 12, 2017. After the neo-nazi and ‘alt-right’ Unite The Right rally had been shut down, anti-racist counter-protesters were marching through the streets celebrating victory when Fields drove his car into the crowd, killing Charlottesville resident Heather Heyer and injuring many others.

Federal charges announced today against Fields, according to the DOJ, include:

In the immediate aftermath of the tragic events of August 12, Attorney General Jeff Sessions announced that his office was opening a civil rights investigation into the car attack. Today represents the first time federal charges have been formally filed against Fields after a grand jury had been underway for most of the past year. Members of Charlottesville’s protest community had urged non-compliance with the grand jury after survivors of the car attack had been subpoeaned to testify, leading to accusations that the proceedings were also being used to target antifascists.

According to Joseph Plantania, Commonwealth’s Attorney for Charlottesville, the federal indictment does not affect the pending case against Fields in the state of Virginia. Fields is currently scheduled to stand trial for his state charges on November 26, 2018.

Pamela Starsia, a Charlottesville attorney representing several local anti-racist protesters, shared her response to the indictment with us:

“Hopefully, this indictment will help take some of the air out of the right wing conspiracy theories that anyone other than Fields was responsible for the car attack. But those of us fighting for collective liberation know that true justice will never come from the state or from a fundamentally unjust and oppressive criminal punishment system. To the extent leaders at the Department of Justice might think that this indictment will distract us from the Department’s unbelievable cruelty and overt racism under Jeff Sessions, they’re not fooling anyone.” – Pamela Starsia

Throughout the day of August 12, 2017, James Alex Fields was seen marching alongside members of the neo-nazi group Vanguard America, & holding a shield bearing the group's logo. Other brutal violence that day was also connected to Vanguard America symbols: https://t.co/53XFWY0PnG pic.twitter.com/UU3BFkQMBG

While the extent of Fields’ direct relationship with any neo-nazi organizations still remains unclear, he was seen marching with members of the group Vanguard America. In the weeks and months after Charlottesville, Unicorn Riot obtained hundreds of thousands of leaked chat messages sent over the program Discord, which was used by many nazi groups, including Vanguard America, to plan the Charlottesville rally. The leaked chats show many attendees and supporters of Unite The Right immediately began celebrating Fields’ attack.

According to an independent law firm review of last year’s events in Charlottesville, the street where Fields carried out his attack was supposed to have been closed to traffic. The street had been guarded by a single wooden sawhorse and one School Resource Officer who had been allowed to leave her post earlier in the day.

Read the full federal indictment against James Alex Fields below: 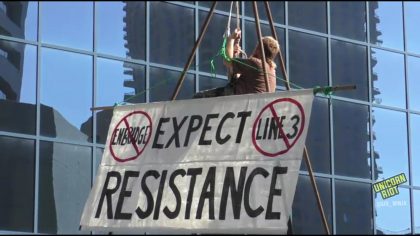