Harrisburg, PA – On January 3, Pennsylvania’s Department of Environmental Protection (DEP) issued an Administrative Order halting all construction of the Mariner East 2 Pipeline. The natural gas liquids pipeline is being constructed by Sunoco Logistics, who in 2017 completed their corporate merger with Energy Transfer Partners. The pipeline begins at fracking fields in Scio, Ohio and crosses southern Pennsylvania to reach its terminus at refineries in Marcus Hook near Philadelphia, where the natural gas liquids will be exported by ship for use in the European plastics industry. The decision by the DEP, which has historically sided overwhelmingly with oil and gas interests, comes after over 100 spills of drilling slurry have plagued construction along the pipeline route. Bentonite clay leaked from Mariner East 2 drill sites has damaged numerous streams and natural areas and tainted drinking water in private homes and public schools.

Horizontal directional drilling by Sunoco has also led to the “development of an expanding sinkhole that currently threatens at least two private homes and is within 100 feet of Amtrak’s Keystone Line”, according to PA State Senator Andy Dinniman.

State regulators cited a long series of “egregious and willful violations” committed by the pipeline operator while constructing Mariner East 2. The DEP website’s Compliance and Enforcement section for Mariner East 2 shows 33 Notices of Violation sent between May 9, 2017 and January 8, 2018 regarding drilling incidents in over 12 counties.

The order from the Pennsylvania DEP essentially freezes all construction along the pipeline route, with specific exceptions allowing anti-erosion measures at pipeline dig sites as well as maintenance of horizontal directional drill (HDD) equipment.

Last summer, Unicorn Riot visited Camp White Pine, a direct action encampment using tree-sits and other tactics to obstruct the pipeline route. After they were served with notice, Sunoco had seized a portion of their forest land under eminent domain, Ellen Gerhart and her daughter Elise decided to invite supporters to live on the easement and have erected several complex aerial blockades.

In summer 2017, we also traveled to Chester County, outside Philadelphia, where drilling by Sunoco contractors for Mariner East 2 had damaged local water tables, destroying and polluting local aquifers and private wells. We heard from affected residents, as well as members of neighborhood-based Safety Coalitions working to address safety concerns posed by Mariner East 2.

While driving through Chester County, we also discovered Sunoco was conducting horizontal directional drilling within feet of dozens of homes in an apartment complex, exposing residents to extreme drilling noise and toxic fumes from an open waste pit.

While the legal shutdown of virtually all construction along the pipeline route has been hailed as a victory by many activists, others have also pointed out that the order does not stop the pipeline entirely, and merely points out issues Sunoco must address in order to proceed.

“It seems like a false thing to me, like when Obama supposedly halted the Dakota Access pipeline,” – Elise Gerhart of Camp White Pine told The Intercept

This order has no teeth. As soon as @SunocoPipeline has submitted some paperwork then work will resume.

Citizens of PA have no need for this export pipeline. The permits should be revoked. #KeepItInTheGround! pic.twitter.com/UgFil9gdy3

In a statement, Camp White Pine explained why they felt direct action against the pipeline was still necessary and how the order by state regulators offered “no relief” to communities and ecosystems impacted by Mariner East 2.

“During this ‘halt,’ people need to remain skeptical and vigilant. It will be up to folks out on the ground to hold Energy Transfer Partners, the Pennsylvania DEP, and Governor Tom Wolf accountable to this order. ETP has worked in secret on unauthorized portions of the project. There is hardly reason to believe that they will stop this practice. Now is the time to get out and about with cameras, and record activities. We will see after 10 days if Energy Transfer Partners is even interested in complying with this order.

This halt was not a gift from the governor’s office. It was won by a group of residents who demanded it. As always, the responsibility of putting a stop to ETP’s dangerous practices will continue to fall on people living under a government who refuses to protect us.

This order does not hold ETP accountable for the damage they have already done, or the crimes they have committed. It does not bring clean water to those who have already lost it. It does not bring justice to those whose rights have been violated, including our environment. Now is not the time to sit back and bask in a false sense of relief. It’s a time to push back with everything we have left.” – Elise Gerhart, Camp White Pine 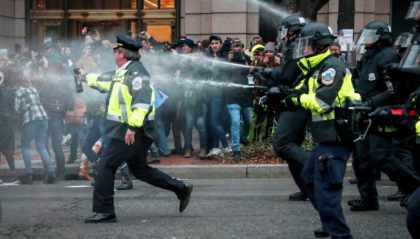