Philadelphia, PA – On Friday, July 27, Mayor Jim Kenney announced he would not be renewing a contract that allowed ICE agents access to the Preliminary Arraignment Reporting System (PARS) database maintained by Philadelphia police. The city will now let the PARS contract expire at the end of August. Kenney said that he “cannot in good conscience allow the agreement to continue” and that he believed the database was being used “in inappropriate ways.” Access to the PARS database allows ICE to access city data about people born outside of the US, including those with no criminal convictions, to target them for deportation.

Ending the PARS contract with ICE was one of three main demands of ‘Occupy ICE Philly’, a coalition of protesters who had initially camped outside the Philadelphia ICE office at 8th & Cherry streets in early July before being evicted by police.

In early July, #AbolishICE protesters set up camp to blockade the Philadelphia ICE office and were violently cleared out by @PhillyPolice. Since then, #OccupyICEphl has been camped out at city hall to pressure Mayor Kenney to end PARS contract w ICE https://t.co/lPjWl3zzA6 pic.twitter.com/Zv33h9dBo7

After police destroyed the first camp outside ICE, a few protesters decided to move the remaining camp infrastructure to city hall, where they said they would remain until the Mayor officially withdrew from collaboration with ICE via the PARS system.

Last week, the mayor’s office announced they were giving protesters an eviction notice because the city claimed construction was planned for the area they were occupying. Before it was dismantled on Saturday, the camp had grown considerably into a temporary living space for dozens of people, with a kitchen and supplies.

Organizers say they are still working towards their other demands: the total abolition of ICE, and the closure of the Berks County Family Detention Center outside of Philadelphia. Recent protests have targeted the federal Berks County ‘baby jail’ facility, one of 3 family detention centers in the country and the only one able to hold families indefinitely. Pennsylvania Governor Tom Wolf has also been facing pressure to close the facility, which was cited in 2015 by the state’s Department of Human Services for code violations.

At a press conference on Friday afternoon, organizers gave credit for the victory of the Mayor ending the PARS agreement to the full-time residents of the ‘Occupy’ camp, many of whom were homeless, as well as long-standing immigrant advocacy groups in Philadelphia. Juntos, one of the groups that had been supporting Occupy ICE and calling on Mayor Kenney to end PARS, has also been running a ‘Shut Down Berks’ campaign calling for the closure of the nearby family detention center.

Watch our livestream of Friday’s press conference below:

Some of the full-time camp residents we spoke with said they saw a connection between the city’s support for ICE and racist stop-and-frisk practices still carried out by Philly Police. Stop-and-frisk is one of the local issues taken on as a cause by the encampment in the weeks since it was moved to city hall. Aaron, who had been living at the camp, told Unicorn Riot that Occupy ICE’s willingness to welcome homeless people is why it was able to last as long as it did:

“It grew on its own, really, it was basically the feeding of the homeless, taking them in and providing shelter for them… this encampment is mostly a homeless encampment which picked up the banner of what was going on with the issue… I think this might be the first time that I’ve seen something like this happen… and they genuinely care, too. They really wanna make a change. And now you’re gonna take on a cause that they really care about, with the stop-and-frisk, that’s something that’s really important to these guys, I mean homeless people get it all the time…” – Aaron, camp resident

Philip, another full-time camp resident we heard from, said that Occupy ICE Philly was his first protest, but said that his previous experience with the legal system helped him understand the inter-agency dynamics in play, and why cancelling PARS is not a complete victory for Occupy ICE.

Philip told us that in his view, the PARS contract cancellation was “a good local goal” to claim victory on, “but at the same time government agencies constantly share numerous amounts of information with one another.” He told us that “the real goal, I think, as a statewide goal, is to shut down Berks” and that he hoped continued direct actions, such as blocking traffic, could put pressure on state officials to close the family detention center.

After Mayor Kenney announced PARS, occupiers at the camp celebrated but also knew, in what Aaron described as a “bittersweet” situation, that they had been given a 24-hour eviction notice by the city. By about 3 PM on Saturday, July 28, the camp outside City Hall had been entirely broken down.

Some camp residents of the camp set up a new area with banners and tarps at Arch & Broad streets by the nearby Municipal Services Building. While police have been closely monitoring the area since the City Hall camp disbanded, the new, smaller ‘Occupy ICE Philly #3’ camp has so far been allowed to remain. On Monday, an eviction notice was given saying the city would attempt to clear the camp at 9 AM on Tuesday, July 31. 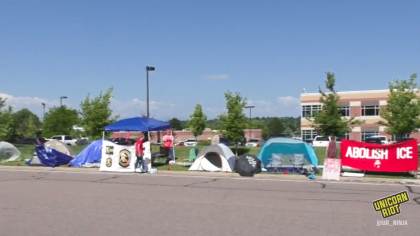