Washington, D.C. – One year after the deadly Unite The Right rally brought hundreds of violent white supremacists to Charlottesville, Virginia, Jason Kessler, the rally’s organizer held an anniversary event with a fraction of the original’s attendance. While many white supremacist and neo-nazi groups are still active in the United States, most have disavowed Jason Kessler and avoided his attempt to organize Unite The Right 2, a Charlottesville anniversary event.

On Sunday, August 12, 2018, Kessler and a few dozen of his supporters first met up at the Vienna Metro station outside of D.C. in Virginia, where a large contingent of police was on standby as the white supremacists were ushered into a train marked ‘special.’ The Metro transit authority had previously stated they would not provide ‘racists-only’ train cars for Unite The Right 2 after the plan was leaked and denounced by the Amalgamated Transit Union.

After riding their private train, Kessler’s group arrived at the Foggy Bottom metro station around 2 PM. Escorted by at least 100 police, they marched at a quick pace for about a half dozen blocks to Lafayette Park, followed by hundreds of angry counter-protesters who yelled, screamed and threw objects.

I’ll have my HD footage of everything that went down online later, but in the meantime: something that stood out to me was the enormous police protection for #UTR2 at every point.

See the moment they first faced counterprotesters in DC: pic.twitter.com/N9jakstmwg

Once the small Unite The Right group reached Lafayette, they made a few speeches but ended up leaving before the event’s scheduled start time, reportedly due to the rainstorm that moved in later in the afternoon. A crowd of about a thousand counter-protesters, including many antifascists dressed in black as well as a large Black Lives Matter contingent, amassed outside the police checkpoint as another large, permitted counter-rally also took place in another area of Lafayette Park.

Police vehicles forced to back up as large antifascist & #blacklivesmatter marches converge, then double back to occupy street outside checkpoint for #unitetheright2 in DC pic.twitter.com/mdTcDOmSX6

While Kessler had tried to water down his image as a known white supremacist by recruiting token people of color to attend his event, many open neo-nazis were still in attendance. Inviting “non-white speakers” had been a tactic discussed in a Facebook Messenger group chat made by Kessler to plan Unite The Right 2, which Unicorn Riot obtained and published earlier this summer.

The leaked chats show Kessler working with members of neo-nazi groups, such as Vanguard America, while also attempting to create a non-racist image for his anniversary event.

When a rainstorm began to move in, the neo-nazi rally’s police handlers announced that it was time for them to leave. Kessler had made arrangements for the group to be picked up by a bus at the end of the rally. But his transportation plan didn’t work out – according to reporter Ford Fischer, “someone convinced Jason that they were going to be his bus driver, then left him stranded.” The few dozen people who had gathered for ‘Unite The Right 2’ ended up leaving the scene in a van reportedly provided by the US Secret Service.

After the ‘Unite The Right’ group had already left, police and Secret Service tried to clear a path through the crowd that had gathered right outside the barricade. A brief scuffle ensued with a tug-of-war over some banners and barricades, and some water bottles and other objects thrown at police, who eventually backed off and waited for the crowds to leave the area.

This is what the scene was like about an hour ago in DC when Secret Service police tried to clear thru protesters to open up the #UniteTheRight2 checkpoint, but were pushed back by 100s of antifascists. Crowd has now dispersed after Jason Kessler & a 20 or so neo-Nazis left early pic.twitter.com/7U9nTEh74D

After the main group of neo-nazis had left the rally area, a few ‘Unite The Right 2’ attendees hung around and attempted to march. They were followed by hundreds of counter-protesters and police ended up pepper-spraying and arresting several anti-racist demonstrators before the crowds eventually dispersed.

See our live coverage from Sunday below: 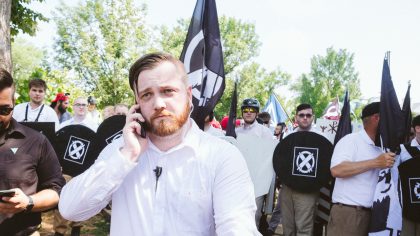