Hammond was recently transferred from the Federal Correctional Institution in Memphis, Tennessee to the EDVA. Due to the secrecy of jury proceedings, it is unknown what the federal grand jury is investigating or why they are seeking testimony from Hammond.

At the same time, informed observers widely suspect this is the same grand jury investigating WikiLeaks, its founder Julian Assange, and its previous sources. Judge Trenga, who ruled on today’s court hearings, has also presided over the grand jury proceedings of Chelsea Manning, a different WikiLeaks source, also held in contempt for refusing to testify in front of a grand jury. Manning continues to be detained for refusing to testify.

Being held in contempt for refusing to testify in front of a grand jury is not a criminal charge. As noted by a previous Unicorn Riot report, typically grand juries are used to investigate crimes, sit for approximately eighteen months on the findings, and then recommend charges which are filed under seal.

Hammond pleaded guilty in 2013 to hacking a defense contractor named Stratfor as part of the Anonymous-linked hacking crew known as LulzSec. It is unclear what, if anything, the EDVA federal grand jury is investigating but based on his Anarchist principles Hammond has refused to testify in any capacity. Attorneys for Hammond have attempted to raise to Judge Trenga that Hammond would not testify and holding him in contempt would not compel his testimony.

It is a common defense strategy in grand jury resistance, known as Grumbles motion, to raise that holding a grand jury resistor any further will not compel their testimony. Previous resistors have been held for over 250 days. Judge Trenga dismissed that motion in his ruling earlier today. In a statement uploaded to the internet, his solidarity network stated,

“Given the secrecy of grand jury proceedings, we don’t know the nature or scope of the grand jury’s investigation. However, our assumption is that this is the same grand jury that Chelsea Manning is currently being incarcerated for refusing to testify before.” – Hammond Support Network

As noted by the solidarity network, Hammond was due for release in December of this year. Now he will be held in civil contempt, meaning his federal criminal sentence will be suspended, which may mean spending as long as an additional 18 months in jail for the contempt charge.

Hammond has already lost access to a federal program known as Residential Drug Abuse Program (RDAP) which would have reduced his criminal sentence by 9 months.

A reporter for Unicorn Riot was present in the Courthouse and was removed by the bailiff because the proceedings were “sealed by the grand jury.” The bailiff briefly allowed in three federal agents stated that they were with the Federal Bureau of Investigations. After a brief conference with the Department of Justice lawyers present, the agents where also removed.

It is unclear how long the court will hold Hammond in contempt, only stated he will be confined until “such time he purges or the end of the life of the grand jury”. Practically speaking, this means the court could hold him for eighteen months, the length of the grand jury, or until he agrees to testify.

Following the Judge’s ruling, he asked for a sidebar with the four Department of Justice lawyers. During this time, the court projected white noise to prevent eavesdropping. Asked by the defense if the sidebar would be made available to the defense, Trenga responded “No.”

[ Editorial Note: We have updated the statement on behalf of the Hammond Solidarity Network ] 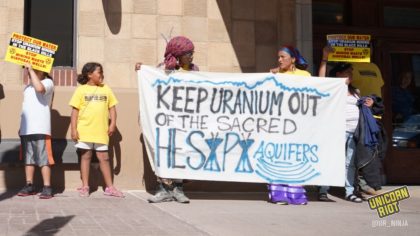 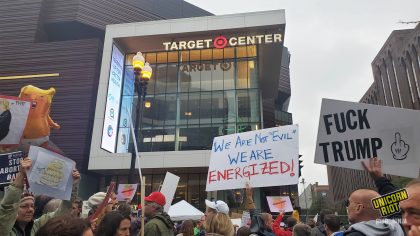