Taos, NM – In the early morning of Thursday, March 14, 2019, local organizers and self-described water protectors with Guardians of Taos Water (GOT Water) rallied at the Midway Drill site off of Highway 64. This deep-aquifer supply water drill is one of more than sixteen either being constructed or set to be as part of the implementation of the Abeyta Water Rights Adjudication, also known as the Abeyta Settlement.

During the rally, one of the water protectors, Buck Johnston, walked down the quarter-mile dirt road toward the drill with climbing supplies, food, a sleeping bag and his phone. He quietly climbed the 60-foot tall drill, and once on top, noticed a worker walking out of their work trailer toward the porta potty, and Johnston let out a loud call.

The worker looked up at Johnston for a few seconds, and after the reality of the situation sunk in, he ran back to the work trailer to call for back-up. David Cooper, owner of Cooper Drilling, was also on the site asleep in his trailer, but woke up when he heard drumming. About twenty minutes later, the Taos police arrived and negotiations began.

Johnston and his father, Tom Johnston, negotiated a deal with police which allowed Buck to remain on top of the drill for four days, completing a sacred vision quest. During the four days, a growing group of fellow water protectors and supporters camped outside of the drill site’s property. An outdoor kitchen was set up, a teepee, and two fires remained burning the entire time. 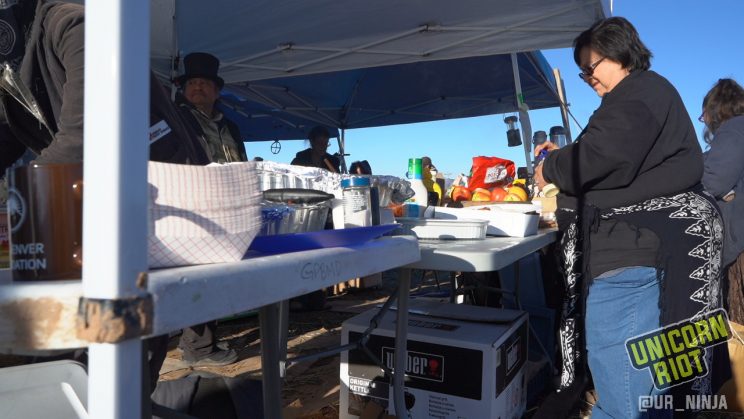 Taos, NM: Fellow water protectors and supporters of Buck Johnston using the outdoor kitchen at the solidarity camp right outside of the drill site’s property.

On Sunday morning at 10am, Johnston descended from the drill, and as part of the negotiation agreement with police, he was allowed to get cleaned and be part of a prayer with a few family members. After a few minutes, he was arrested, taken into custody, and was charged with  criminal trespassing and obstructing a police officer, both misdemeanors.

GOT Water is a local collective of water protectors who strive to spread awareness about the largely secret meetings that started fifty years ago to develop the complicated Abeyta Settlement. The settlement includes all the water rights to the Rio Pueblo de Taos and Rio Hondo stream systems, which contribute to the Rio Grande Basin watershed.

Doug Bridgers of Rivers & Birds, a conservation and education nonprofit in Arroyo Seco, NM, talked to Unicorn Riot about some of the effects the gag-orders have had on the Taos community:

“These meetings are going on with the Bureau of Reclamation right now, they are ongoing meetings, and they are operating under a gag-order. They are nondisclosure agreements that have been forced upon the [Acequia] Commissioners.”

Bridgers added that where he lives in the Acequia Madre del Rio Lucero y Arroyo Seco district, his commissioner resigned because he decided not to sign a nondisclosure agreement. Another commissioner from Lower Las Colonias also recently resigned for the same reason.

“It turns out that [the Abeyta Settlement] is a lawsuit that is initiated by the federal government using Taos Pueblo as wards to press for the exact adjudication of the water, and this suit was brought against the Acequias, and the Acequias banded together, formed the Taos Valley Acequia Association in order to fight and to understand what this adjudication would mean. That process began in 1969, 50 year process now as of 2019.” – Doug Bridgers

The Taos Pueblo is considered to be one of the oldest continuously inhabited communities in the United States, with the central part of the adobe buildings constructed between 1000 and 1450 A.D.

Because of the acequia system, the aquifers are replenished each year and are some of the healthiest in the country, however GOT Water is concerned that the delicate, yet complex hydrogeology may be harmed with drilling at such depths. The region’s geology is made up of many thin layers of sedimentary rock, which may move around when drilled into. 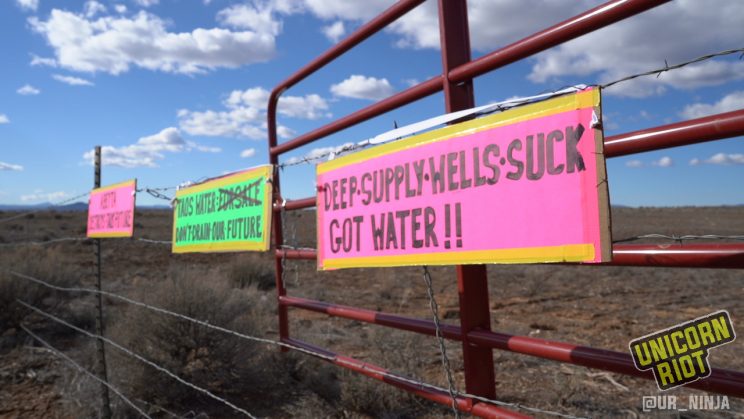 Taos, NM: Fence and barbed wire on the edge of the Midway Drill site’s property adorned with signs made by water protectors.

In 2018 in the Upper Rio Grande Bioregion, the flow in the Rio Grande at the Colorado-New Mexico state line bottomed out at 7 cubic feet per second, which can be compared to a trickle of water. In addition in 2007, the World Wildlife Fund has declared the Rio Grande one of ten most endangered rivers in the world, and in 2018, American Rivers named the Lower Rio Grande among America’s Most Endangered Rivers of 2018.

Under the Abeyta Settlement, El Prado Water and Sanitation District is entitled to two wells, and the Midway Drill is their first supply well being constructed. GOT Water is strongly opposed to the amount of water El Prado wants to withdraw, especially since 200 annual acre feet (65,170,286 gallons) of the water is planned to go towards a new development called Tarleton Ranch Eco Village.

According to Johnston, El Prado’s annual consumption for last year was 100 acre feet of water,

“so that’s more than double the entire district’s use for this one village with 400 new homes, and 90+ commercial spaces, and it’s being designed and initiated by people that just want to make money, they’re not doing it to benefit the community, they’re doing it as a development project to make money.”

When Johnston climbed the water drill on March 14, he and his fellow water protectors had no idea how ideal the timing was. The workers had not finished filling the drill hole with glass beads as an initial filter, so while Johnston was on top of the drill, part of the dirt collapsed in the hole where the water was supposed to infiltrate the pipe.

“So what they need is 200 gallons per minute for 96 hours to declare it a functional well, they were expecting to get somewhere around 1,000 gallons per minute from that well, which they’re legally entitled to, but now they’re saying that because of the gravel that filled in and blocked part of the infiltration portion of the piping, that they estimate they’ll only be able to get about 300 gallons per minute, which I swear we didn’t do that on purpose, but that is exactly what we wanted, just to cap the amount that that well could pull.

And we wanted to do that through the legal process through moratoriums or county ordinances, or something, some way to limit the amount of withdrawal, and we wanted them to have to show a need for how much they withdraw from that well, which we don’t believe there is a need for that much.”

After the action, El Prado and Cooper Drilling filed a lawsuit against Guardians of Taos Water for injunctive relief for two million dollars. The injunctive relief is to prevent GOT Water from continuing their active opposition, and to pay for the money El Prado and Cooper Drilling apparently lost during the four-day action including the cost of idle equipment, cleaning up the hole where debris fell in, and possibly for renting the fire truck with the 100-ft ladder for four days. 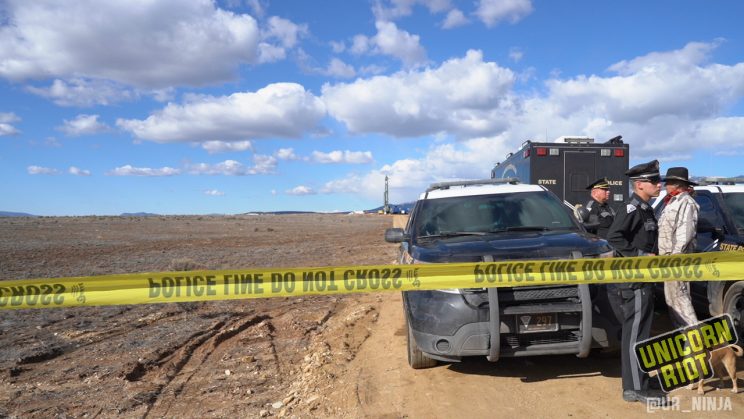 Taos, NM: Yellow police line tape hangs in the foreground as negotiations between Tom Johnston (Buck’s father) and police were underway. Buck remained on the Midway Drill in the background for four days.

It remains unclear if the lawsuit will include any damages to the drill capacity itself, since the dirt collapsing in the drill hole may have decreased the amount the well can withdraw. There was also a restraining order served to Johnston, GOT Water, and 50 John/Jane Does to prevent them from accessing the Midway Drill site.

The next step for GOT Water, aside from fighting the lawsuit and supporting Johnston as he contends with his charges, is to file an injunction in court to get comprehensive National Environmental Policy Act (NEPA) studies done on all the proposed wells.

“What I wanted to come from all of this was to draw enough attention and put enough pressure on the parties involved in the Abeyta Settlement to have at least one, if not all of the parties, voluntarily initiate an Environment Impact Statement (EIS) as required by the National Environmental Policy Act (NEPA)… There is funding outlined in the Abeyta Settlement for this NEPA process for this well. I don’t see why this didn’t happen.” – Buck Johnston

Johnston’s trial is scheduled to begins July 11, 2019. Unicorn Riot will continue to provide updates when they become available.