Protestors marched down the street in a group before swarming the building and setting upon it with fireworks, spray paint and projectiles. Drummers beat out a rhythm while the crowd chanted “Stop Cop City!” Several large fireworks were thrown at the building, their loud booms echoing off the imposing corporate architecture and sending sparks glistening through the air.

Slogans were scrawled across the Brutalist concrete exterior and fifteen foot tinted glass windows reading “No Forest, No Peace!,” “Trees Not Cops” and “Defend ATL Forest!” Paint bombs smashed across the face of the building leaving it blotted with mauve paint—the running streams of color stark against the white concrete.

The protest was part of a week of action organized by the Defend the Atlanta Forest movement. The campaign, which began in spring of 2021, seeks to prevent the construction of an 85-acre police training facility on the old Atlanta Prison Farm in unincorporated DeKalb County as well as the construction of a sprawling film studio currently planned by the Atlanta film company Blackhall studios.

Five people were arrested following the action and booked on several charges, including some felonies. Charges include “riot,” “criminal damage to property” and “terroristic threats and acts.”

The protest Thursday occurred in the same week as another protest at the home of Shepard Long, Principal of Long Engineering, a subcontractor of Brasfield & Gorrie.

In recent weeks, autonomous attacks in solidarity with efforts to defend the Atlanta Forest have occurred throughout the country, according to a website that tracks such actions. One repeated target has been Atlas Technical Consultants, LLC., the parent company of Long Engineering, a subcontractor of the Cop City project, which had the windows of its office smashed in Albany, NY and Minneapolis, MN and it’s building tagged with graffiti in Highland, IN.

The website also received reports of attacks on Bank of America, which donates money to police foundations across the country, including the Atlanta Police Foundation. Attacks were reported in Pittsburgh, Philadelphia, Portland and Minneapolis.

The Cop City project is spearheaded by the Atlanta Police Foundation, a nonprofit that works to advance law enforcement interests in and around Atlanta. The project carries a price tag of $90 million for its initial phase, one-third of which will be paid for by the City of Atlanta, with private donors covering the rest. According to a recent update, the police foundation boasted having obtained 85% of required funding.

Brasfield & Gorrie, which is headquartered in Birmingham, Alabama, is one of the largest general contractors in the country, boasting annual revenue of nearly $4 billion. With offices throughout the southeast, the company handles contracts for large infrastructural projects like hospitals, schools and resort hotels. The Atlanta office is located in a corporate hub in Cobb County at the edge of Atlanta at 2999 Circle 75 Parkway.

The following day, the corporate headquarters of Brasfield & Gorrie in Birmingham, Alabama were also attacked, according to an anonymous email published by the website Scenes from the Atlanta Forest. The email claimed that the front windows of the building were smashed and the sign tagged with graffiti.

A week later, on May 17, an array of law enforcement agencies raided the burgeoning autonomous zone within the Atlanta Forest and arrested eight people while destroying protest infrastructure.

After the raid, officers from Atlanta Police discussed using “deadly force” against protestors if they used Molotov cocktails to defend themselves from a raid.

Phase one of the police training center is currently scheduled to open at the end of 2023. But many Atlantans are committed to making sure that never happens.

“We are confident that Brasfield & Gorrie will make the right decision to drop your Cop City contract with the Atlanta Police Foundation,” a handout distributed by protestors at the company’s offices reads. “To put it simply, we won’t stop until you do.” 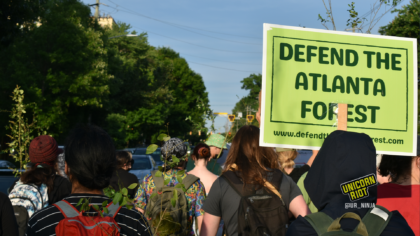 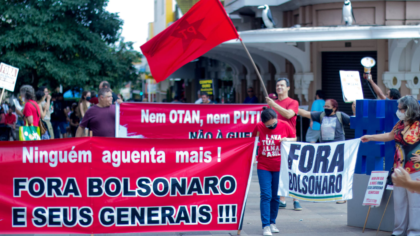