Amidst rising tensions between Palestinians and Israeli security forces, Israeli police are restricting the movement of Palestinians in Jerusalem during the holy month of Ramadan. Over 8,000 police are deployed through the city, while Israel’s foreign minister made a “provocative” visit to Damascus Gate and confrontations and arrests have been nightly. On the third night of Ramadan, April 4, Israeli police detained at least seven Palestinians and injured at least 11 outside Jerusalem’s Damascus Gate (AR: باب العامود or Bab al-Amud). Watch Unicorn Riot video from Jerusalem on April 4, 2022 below.

The Bab al-Amud area of ​​Jerusalem is facing nightly conflict following arbitrary measures taken by police since the first day of Ramadan, restricting the ability for Jerusalemites to celebrate the holy month.

On the first night, along with a heavy police presence, Israeli authorities installed iron screens around the area, hampering the seating and movement of Jerusalemites. By the morning of the second day, specialized teams began installing headlights on top of the observation rooms that were built by the occupation force in 2017, in the vicinity of Bab al-Amud.

Lapid confirmed the deployment of over 8,000 policemen throughout Jerusalem, in the vicinity of Al-Aqsa Mosque and the alleys of the Old City. The focus of the forces is to deploy overt and secret units in the Bab Al-Amud area, which, according to police allegations, turned into a “ring for rioting and disturbing public order.”

Palestinian officials issued statements criticizing Foreign Minister Lapid for the visit to the flashpoint Damascus Gate in Jerusalem on Sunday.

The Palestinian Authority (PA) Foreign Ministry “condemns in the strongest terms the provocative incursion by Israeli Foreign Minister Yair Lapid in the Bab al-Amud [Damascus Gate] area in occupied Jerusalem, and strongly condemns the promises he made to Jewish extremists to deploy more occupation forces and police in Jerusalem under the pretext of providing protection for them during the Jewish holidays,” the ministry wrote in a statement on its website Sunday night.

According to the PA statement, Lapid was “inciting against the Palestinians… as if there are only Jewish holidays… in complete disregard for the existence of Muslim and Christian holidays, and in denial of the fact that it is the Jewish extremists who attack the Christian and Islamic sanctities and their followers.”

Bab al-Amud / Damascus Gate is important for Arabs in Jerusalem as it is the national and social icon in which they find an outlet for themselves and a space to emphasize the Arab identity of Jerusalem. Before the Maghrib (evening salat) call to prayer, and until midnight, Jerusalemites gather in the square and terraces of Bab al-Amud during Ramadan, spontaneously.

Damascus Gate enters the Muslim quarter of Jerusalem’s Old City from the north. The other three quarters of the Old City are Christian, Jewish, and Armenian.

Israel captured the Old City and East Jerusalem from its Jordanian occupiers in 1967, annexing the area and claiming it to be part of sovereign Israel. Meanwhile, the Palestinians seek the area as the capital city of an independent Palestinian state.

Continue to follow Unicorn Riot for more updates from the frontlines in Palestine. 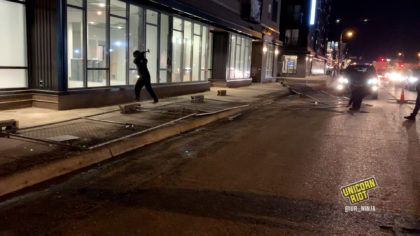 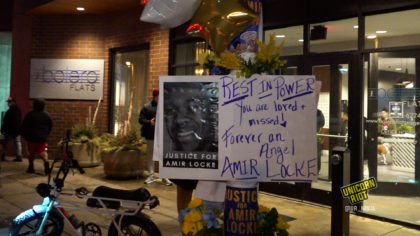 No Charges for Minneapolis Cop in Amir Locke Killing