As anti-Roma racism and violence spikes in Greece with recent murderous attacks by police and Greek citizens, we take a look at some of the history of how Roma exclusion and exploitation have led to this crescendo.

Romani, or Roma people, also known by the derogatory term of “Gypsies” given to them by the Greeks who thought they were Egyptian in origin, are inherently nomadic people who’ve migrated west from regions in and around India. Currently, anywhere from 175,000 to 365,000 Roma live in Greece across approximately 350 settlements.

With the creation of nation states in the Balkans as the Ottoman Empire was breaking up in the late 1800s, the Romani people were initially excluded from the legal status of citizenship. Up until 1978-1979, the majority of Roma in Greece were not entitled to Greek citizenship, despite having lived for decades or centuries in these territories. Since the 80s, Roma have been granted Greek citizenship, but continue to face harsh racial discrimination.

Racism against Roma in Greece and in the Balkans in general is multilayered and multifaceted. At times it has a medieval Christian essence; ‘Gypsies are witches,’ ‘Gypsies see into the future,’ and ‘the curse of the Gypsy woman.’ A favorite threat of Balkan grandparents these latest generations has labeled Roma as a boogieman, “sit tight, or the Gypsy will come get you.”

A key pillar of anti-Roma racism is the doctrine of “they want to live like this.” This phrase at best hides a romantic exoticism about Roma customs and traditions. At worst, it conceals the vicious cycle of exclusion and poverty.

Racists say they are not practicing racism towards the Roma and they’re merely a rival culture. Racists say there is a voluntary attachment of the Roma to a way of life that they must overcome on their own. Racists say the Roma in Greece have rejected opportunities and want to just live in shanties, without access to basic goods like water and electricity, and unable to give their children access to education.

Central to this is the belief that Roma are the ‘unproductive parasites’ living off the welfare state and refusing to adapt to the modern capitalist condition. In fact, the long-standing exclusion of Roma people from the labor market on the basis of racial discrimination and the devaluation of the traditional professions they practiced de facto throw them out of modern capitalism.

Less than half of Roma have paid employment, according to a report published in 2018 by the European Union Agency for Fundamental Rights titled, ‘European Union Second Survey on Minorities and Discrimination: Selected Findings for Roma.’

The same report notes that only 38% of Roma aged 20-24 have paid work and when broken down between men and women, a total of 72% of young Roma women are unemployed. The numbers are worse as one gets older: only 24% of Roma aged 55-64 have a paid job, while 53% of the general Greek population in that age range are employed.

Roma are poor because of the racism they receive and on top of that, they receive additional discrimination because they are poor. There is a misconception among non-Roma Greeks that the culture is exotic and that they are a “free people.” But they have every basic human need as any other in modern Greek society—this view is only perpetuating a system of racism. Inside of the Roma camps there are children who are supposed to be picked up for school, but the school bus doesn’t stop for them while non-Roma children are visible on the bus riding by.

So it is around the Roma “way of life” that anti-Roma racism and cultural racism is built. This serves as a cloak for racial discrimination against Roma who do not fit into the dominant white Greek model. And while they perform obligations that other Greek citizens have, like taxes and military service for men, they remain eternally ‘foreign.’

The Roma are like invisible people, whom the Greeks pretend not to see or seek not to see in their immediate field of vision, e.g. the Roma camps are sought to be expelled from the metropolitan area itself.

In the recent decades, the Roma have faced forced evictions by the authorities, leaving whole settlements evicted over the years. This has left 11% of Greek Roma without having access to housing and 45% of Greek Roma living in segregated housing, inferior to those of the general population. Meanwhile, one in three do not have access to safe drinking water.

Invisible until some decide to approach them for electoral purposes before the next election; their vote has been claimed by everyone from fascists to leftists since 2000. This pushes the Roma to consider how it expresses itself politically with survival in mind and those who come to claim their vote know this.

Political campaigning among the Roma is also a strategy of counterinsurgency. An endless oppression, repression and marginalization seems to always be leading full speed ahead to an explosion. Political promises of change are a way to keep the population calm. However, actual changes in living conditions have been minimal over the past decades.

These tricks of the respective governments are of course by no means the norm. The state of the boogeyman, to which Roma have always been accustomed to being subjected, remains the dominant strategy for dealing with the ‘Roma problem.’

Criminalization of Roma in Greece

Greece has one of the most policed Roma communities in the world. Constant constraints in public spaces on the basis of their ethnic profile without justification happen regularly to Roma. This happens in the city, while police stage operations in Roma camps across the country.

All happening in the context of strategies for “crime prevention.” Police and residents’ committees use the media to spread propaganda about the Roma, claiming they’re involved in drug rings and fraud.

The police then ‘prevent crime’ by conducting “race” oriented searches in camps, even keeping statistics separate for Roma from the rest of the population they control and arrest; a necessary tactic for them to continue their narrative that Roma are criminals.

Roma are largely arrested for ‘stealing electricity,’ an ‘offense’ directly linked to the fact that Roma camps themselves are not given electricity, along with petty theft for survival, and outstanding warrants for missing court appearances.

The number of Roma youth in juvenile prisons in Greece is 7 times higher in proportion to the general population.

The list of victims of Greek Roma by the Greek police is large and the same applies to those who have been tortured at the hands of the police.

As much as the police are interested in policing the Roma, they are indifferent to the crimes against them. Roma are held accountable, not people who can use their rights and expect accountability from others, they say.

While Roma are under constant attack by fascists and racists, testimonies and complaints from Roma are unworthy, not recorded and rarely investigated by the police. Therefore, racially motivated crimes are rarely brought to justice. There is also the phenomenon of under-reporting, and where people who are victims of racist police violence or hate crimes rarely get to report these incidents to the authorities, who are very often the perpetrators themselves.

In these circumstances there have at least six appeals to the European Court of Human Rights of complaints of torture or police abuse. Greece has been convicted at least five times of violating the human rights of Roma between 2012 and 2018 and given lenient sentences.

Furthermore, out of 140 complaints of alleged ill-treatment by police officers towards Roma in the years 2015-2016, only 11 instances saw minor disciplinary sanctions imposed with no one convicted by a court.

Developing out of the continued exclusion from Greek society, high levels of disparity are prevalent in the educational system between Greek Roma and the general Greek population. Zero percent of Greek Roma were enrolled in post-secondary and higher education, according to a report prepared by a coalition of NGO’s as part of the Roma Civil Monitor and published by the European Commission in 2019.

Further numbers published in the report indicate that the percentage of Greek Roma who had not completed any education in the 16-24 age group was 42%, in the 25-44 age group it was 56%, and in the age group 45 and over, it was 82%. The enrollment numbers, according to the 2019 report, are as follows:

Roma Communities in the Pandemic

With the official state treating the Roma as invisible even during the coronavirus outbreak, their living conditions in Greece deteriorated during the pandemic, leaving communities more exposed than ever. For many of the Roma left living in shacks and in camps there is no drinking water, water supply or irrigation, making it impossible to comply with preventive hygiene and protection measures, while the food crisis within the camps is continually becoming more and more intense.

The State has not provided disinfection, garbage collection, nor food and sanitary supplies. In the face of this indifference, the Roma are confronted with an unprecedented mobilization in terms of self-organization and solidarity. They try to help their neighbors in any way they can.

For more from Greece during the Coronavirus Pandemic: 1, 2, 3

The positive COVID cases recorded so far in the camps and Roma communities are relatively limited. This is due to the self-protection of the people themselves with the meager means at their disposal, but also to their isolation from the general population.

Yet, the media resorted to stigmatizing the Roma, describing the camps as a hygiene bomb and creating a sense of danger among the general population, keying in on an isolated incident, where a lack of self-protection measures was observed.

Central to this is the problem of employment, since the vast majority of Roma cannot work due to the prolonged lockdown, this means that they cannot meet the daily food needs of their families.

Illegal traders, street vendors, seasonal workers or vendors in hawker shops that have been closed have been excluded from emergency benefits and assistance in the midst of a pandemic, being uninsured and working in the black market.

Finally, the measure of compulsory distance learning in schools has left thousands of Roma children out of the educational process, since they obviously lack the necessary technological equipment and network connections to participate.

We are in a period in which society in Greece is not in motion and the previous cycle of social movements has ended years ago. Even so, we cannot help but ask ourselves the question, what would have happened if Roma had not been murdered by the Greek police, but by white Greeks. It remains a huge challenge for anti-authoritarian and progressive forces to form a common bond with Roma communities. Their exclusion and the conditions of apartheid under which they live are all too real.

See the first in our series on anti-Roma racism and violence in Greece.

This article is an editorial, which includes the author’s opinion, informed by objective facts, analysis and research. 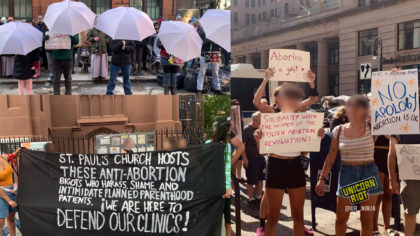 A Fight to Defend Abortion in Brooklyn: Clinic Defense and New York City for Abortion Rights 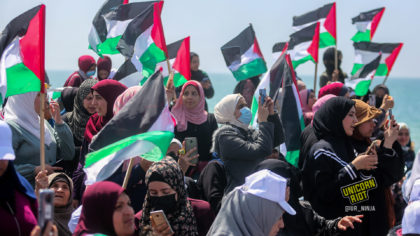