Thessaloniki, Greece – Refugees in the overcrowded Moria Camp are expected to receive 1,500 soaps donated from the workers of the self-managed factory Vio.Me. Occupied for over seven years now after their bosses stopped paying the workers, the Vio.Me. factory produces eco-friendly soaps and cleaners.

Vio.Me. has been running on generator-power supplied by the solidarity of their supporters after the right-wing Greek government cut the electricity to the worker-run factory in late March 2020.

RELATED: Occupy, Resist, Produce: Inside the Self-Managed Factory of Vio.Me.

Now, teamed up with Beyond Europe’s ‘Fight the Dirty Conditions‘, the workers of the Vio.Me. cooperative are paying that solidarity forward by donating soap bars and liquid soaps to the Moria refugee camp on the island of Lesvos.

#LeaveNoOneBehind: The first soap from #Viome is reaching #Moria. Check out the video on our campaign "Fight the dirty conditions" to support both refugees on Greek islands and self organized factory Viome in #Thessaloniki. #Solidarity now: https://t.co/XKgOSIGPR7 #Covid_19 pic.twitter.com/eW6nGy90Y0

Moria Camp consists of refugees waiting to get into Europe, with their rights to apply for asylum suspended. Those living in the camp suffer daily in unsanitary and cramped conditions, living in makeshift cardboard huts and tents. Built on a former military base, the camp was only intended to detain 3,000 refugees, yet over 20,000 are currently concentrated there. Beyond Europe, the “anti-authoritarian platform against capitalism” that’s teamed up with Vio.Me. has a call for action to close Moria Camp.

The conditions in the camp make it hard to follow international coronavirus pandemic guidelines of social distancing and hygiene. This means that Vio.Me.’s donation of soap supplies is even more urgent than before the pandemic, and could literally save lives.

The workers of Vio.Me. gave the following statement regarding the solidarity soaps:

“More than 1,500 soap bars and liquid soaps will be distributed to the refugees and their families who are crammed up, living at the detention centers in the village of Moria in Mytilene, Lesvos, surviving in the worst conditions – doomed by war and the interests of capital.

We call on the people to support the Beyond Europe Solidarity Campaign, which unites struggles for a better life. It’s the least we could all do to improve the living conditions of the people in Moria.

The struggle that we, the workers at Vio.Me. Coop, give every day, is on the same side. We refuse to leave the factory and we continue to work and guard it, because Vio.Me. will not close for two cables, but it will remain because society demands it.

Solidarity is the weapon of the people.“

Unicorn Riot spoke with writer and activist Panagiotis Koustas in our recent report – ‘A Country in Quarantine, Coronavirus in Greece Part 1‘ – for an update on the situation in Greece. Koustas said the right-wing New Democracy government “suspended the ability [of refugees] to have health care as soon as it took office“, and said that the new government violates refugee’s human rights while practicing systemic racism.

RELATED: A Country in Quarantine, Coronavirus in Greece Part 1

The New Democracy government also used the quarantine measures during the coronavirus pandemic as cover to carry out their action to cut the power on the internationally celebrated Vio.Me. factory.

Though the workers have received the amazing generosity from the community to get their production back started, the generators gathered are not big enough to create large scale production.

[UPDATE] With the help of a generator from community solidarity, @SE_VIO_ME continues production after government cut their power!

Article available en español thanks to a viewer translation! https://t.co/lnYKzwt68J

Vio.Me. has an ongoing fundraiser “asking for the help of the global movement” to restore #Power2VioMe and has an international day of internet solidarity planned for April 29, 2020.

Last year, Unicorn Riot produced a three-part video series on the factory after we were invited inside Vio.Me. We spoke with five of the workers, took a tour of the factory, gained a deeper perspective and history of Vio.Me. from the workers, and a had sit-down with Dimitra, a psychologist in Vio.Me.’s autonomous and open-to-the-public Workers Healthcare Center.

Stay tuned for further coronavirus specials from Greece on solidarity, mutual aid, prisons, and an update from the camps. 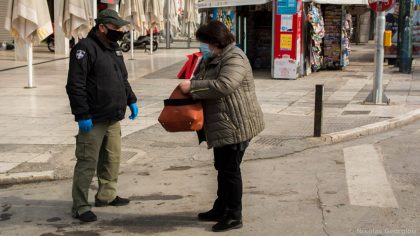 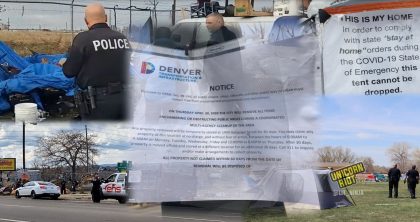