Tucson, AZ – Dwarfed by a four-story edifice of concrete and concertina wire, two boys passed a bullhorn back and forth between them, egging each other on and giggling at their game.

“Your lives matter!” one of them yelled at the rows of narrow windows and those locked away behind them.

“You’re important to us! All you guys!” yelled the other.

Inside the cells, lights flickered on and off, and shapes, obscured by distance and dark, moved in response.

On New Year’s Eve, outside the Pima County Jail on the western edge of Tucson, Arizona, a group of about 50 people gathered to ring in the new year and to remember the lives lost in the jail.

molly block, a volunteer with No Jail Deaths, the group organizing the event, addressed the crowd:

“Tonight, on New Years Eve, a time that marks transition and that marks change…as people across the world are coming to prisons and to jails to make noise, to respond to light flickers…we come here tonight to make noise, to create connection with each other, and to lean into and explore the vast ways that we can communicate with people inside even though we can’t see them or talk to them or hear them, but we can breathe and they can breathe and our breath can meet each other.”

Ten people lost their lives in the Pima County Jail in 2022 alone, making a total of 29 people who have died in the jail since the beginning of 2020. The yearly death rate of the jail is more than three times the national average.

No Jail Deaths’ website hosts a memorial page commemorating each person who died in the jail in the last three years. Last year, Unicorn Riot reported on the death of a local hip-hop artist, Justin Crook, aka J-Mac the Coldest, in the jail.

This ongoing crisis has passed with little more than lip service from those in power. Sheriff Chris Nanos, who runs the jail, has repeatedly sloughed off responsibility for the massive loss of human life, insisting against all evidence that it is normal.

In December, the Pima County Board of Supervisors approved $11 million in pay increases and bonuses for jail staff. Sheriff Nanos, seemingly leveraging deaths in the jail to increase his budget, has called the situation at the jail a “full-blown crisis.”

The new wage increase brings the hourly pay for a corrections officer at the jail to $24.27, up from $22.58, a 7.5% salary increase, according to a memo from the county.

“It’s a really hard thing to do,” said Rosanne Inzunza, whose son Sylvestre Miguel Inzunza IV died in the jail in February, “but I did want to come out because I don’t want it to keep happening.”

For about two hours, the group banged pots and drums, shouted chants, and blasted music in front of the jail, eventually marching out to Silverlake Road and blocking traffic in the westbound lane. They filled the night air with an arrhythmic cacophony infused with equal parts joy and grief. 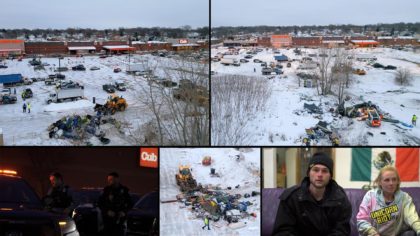