Denver, CO – On Monday, August 1st, 2016 the case against Josie Valadez Fraire was dismissed. The 22-year-old Indigenous woman was detained and ticketed for burning sage at a counter-Trump protest in July.

“The police told me I disobeyed a lawful order to put out an active fire. There was no active fire, for sage burns after you remove the fire from it. Now they crushed my sage in the street. Smudging sage is an Indigenous practice that has happened for generations upon generations on this very land. It is used to cleanse negative energies and bless the space. They (DPD) by crushing my sage and prohibiting me from practicing my spirituality, they are actively abridging upon my constitutional rights. I can practice my spirituality in whatever form I choose. Their law enforcement is actively anti-indigenous, anti-brown and the folks that arrested me were actually brown folks themselves and if that doesn’t tell you something I don’t know what does.” – Josie Valadez Fraire

The director of Homies Unidos Denver, Gerardo Lopez, who helped organize the community and Josie’s supporters to attend the court hearing, adds:

“We must, as a country, honor and protect indigenous spirituality and practices. It is essential that this injustice not be overlooked! Josie’s right to free speech and freedom of religion have been violated.” – Gerardo Lopez “Today as Josie appeared in court, the city attorney has decided to drop all charges against Josie Valadez Fraire. Her charge of failure to obey a lawful order was in fact not a lawful order as it infringed upon her constitutional rights.” – Ross Marhoffer

Although the case was dismissed and the charges were dropped, Josie is planning to move forward with legal action against the Denver Police Department and more specifically the police officers who detained her.

There is a Change.org petition in support of Josie which currently has 7,121 signatures. When the goal of 7,500 is reached, Josie and her supporters are going to print out the petition and personally deliver it to Denver Police Chief White.

“I am thankful to be in this position and really humbled to be in this position where my voice is being heard, but in that position I want to make sure that our voices are being heard… and really insuring that Indigenous Peoples are no longer oppressed in this nation that is literally built on the colonization of our people and the slaughter of our people, and so I will continue to fight.” – Josie Valadez Fraire

Here is our footage from the rally after Josie’s court hearing: 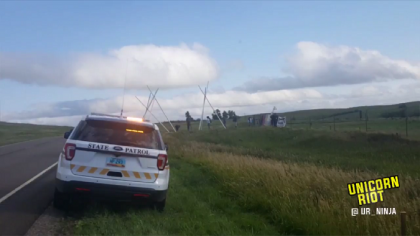