“I am not shocked. This is what this D.A. does” – Pastor Terrance Hughes of the Denver Ministerial Alliance

The office of Denver District Attorney Mitch Morrissey has announced that no criminal charges will be filed against Denver sheriff’s deputies who were involved in the forcible restraint that led to the death of Michael Marshall.

Michael Marshall was a 50-year-old black man diagnosed with paranoid schizophrenia. In early November 2015 he was arrested for trespassing and disturbing the peace at a motel at which he had been staying, and held in Denver’s Downtown Detention Center on a $100 bond that he was unable to pay.

On November 11th, Michael Marshall had a schizophrenic episode in jail. Deputies responded by pushing him against the wall and forcibly holding him to the ground by placing knees in his back. They forced him into a restraint chair and placed a “spit hood” over his face. This restraint led to Mr. Marshall choking on his own vomit and losing consciousness. He was admitted to the hospital in critical condition, placed on life support, and died a few days later. The coroner ruled his death a homicide caused by the restraint technique.

Denver District Attorney Mitch Morrissey (whose office to date has never prosecuted any law enforcement official for incidents involving brutality or killing) has stated that “a remedy does not lie within the bounds of ethical criminal prosecution in this case” and that “physical force exerted against Mr. Marshall by the deputy sheriffs was for the lawful purpose of maintaining order in the jail…”

“I’m extremely disappointed and upset that the sheriffs didn’t get charged. My little heart is broken, but I’m not surprised, not even one bit. Mitch Morrissey has never brought charges in any of the shootings. I don’t know why I thought it would be different for my uncle.”

“the reason they don’t prosecute is this: it’s the way Denver trains their deputies to act. …It’s really a system problem and culture problem in Denver’s law enforcement. They will never change unless they’re forced to change, and nobody has forced them to change. …There was no doubt from the outset of this process what the result of this process will be. …We knew it. The family knew it. The city knew it. Nothing will be done to rein in law enforcement under this administration.”

The city had refused to release the videos to Mr. Marshall’s family. Over 200 friends, family and supporters of Michael Marshall have been on hunger strike for 10 days demanding the release of the video, and the Colorado Independent sued the city of Denver for denying their Colorado Open Records Act request for the jail footage of deputies restraining Mr. Marshall.

Content Advisory: the following links are to videos showing the violent restraint of Michael Marshall that lead to his death

As of today (January 21) three videos have been released to the Marshall family, and are currently posted online. In the second of the three videos, around the 8:20 mark, deputies in the background can be seen joking, laughing, and smiling as the deadly restraint of Michael Marshall is taking place in front of them. According Denver’s Executive Director of Public Safety Stephanie O’Malley, the video will officially be released to the public tomorrow. Michael Marshall’s death at the hands of Sheriff deputies in the jail bears an eerie similarity to the 2010 death of Marvin Booker, another black homeless man who died after being electrocuted and forcibly restrained by deputies after he refused to give up his shoes. Denver District Attorney Mitch Morrissey also declined to file charges against these deputies, although a federal jury awarded a $4.6 million settlement to the Booker family.  Kilmer, Lane and Newman, the same civil rights law firm that represented the Booker family, is representing the Marshall family. Denver Mayor Hancock has come under fire recently for offering to meet with the Marshall family only if no attorneys are present. 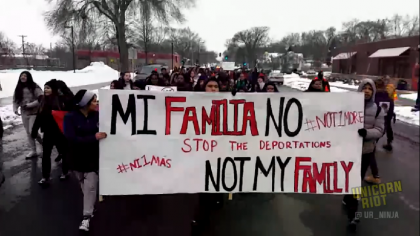 Hundreds of Students Walkout in Minneapolis to Protest Deportations