Use the following PayPal “Donate” link to make a one-time donation of any amount.
In order to receive your gift, please provide your mailing address and t-shirt size when prompted through PayPal. To set up monthly donations please see links at bottom of page

Unicorn Riot is a volunteer-operated non-profit media collective comprised of multimedia artists and journalists. Our decentralized media organization currently spans multiple US cities including Boston, Denver, Minneapolis and New York City. We work to amplify the voices of under-served communities and to further understanding of dynamic social struggles. We are committed to producing original content which exposes the root causes of social conflict and explores sustainable alternatives in today’s increasingly globalized world.

In our first year Unicorn Riot created over 200 website posts, amassed over 575,000 visitors to our website UnicornRiot.Ninja and now averages over 4,500 visits a day (March 2016-April 2016). Our short-form documentary videos gained over 183,000 views on Vimeo while our live coverage from various community events rose above 2,000,000 views on Livestream. Over the last year we raised just over $5,000 in viewer-supported funds.

During the first year, our team of volunteer reporters were repeatedly attacked by police, targeted and arrested in both Denver and Minneapolis while covering stories. Unicorn Riot’s livestream of #Justice4Jamar, an 18 day occupation of the Minneapolis Police’s 4th Precinct, as well as the police sweeps of the homeless population in Denver during Resurrection Village, earned national acclaim. Unicorn Riot also provided viewers with 28 episodes of Deprogram, a weekly show in which co-hosts discussed social struggles and climate change news from around the world.

“It was very savvy on their part, I thought,” he said. “And that includes the live­-streaming that Unicorn Riot did. That was impressive. And their use of Twitter, which is everywhere now, was also fascinating.” – MPR News Director, Mike Edgerly

Additionally, Unicorn Riot members were extremely humbled to close out our first year by being awarded the Servant Leaders Award [see below] from the Black Law Students Association at the University of St. Thomas in Minneapolis for “providing an alternative form of media for underserved communities.”

Unicorn Riot produces videos which provide context for the front-line stories, in order to bring viewers a greater understanding of grassroots social struggles.

Videos have focused on issues such as protests against police brutality, community gardening and autonomy, treaty rights and sovereignty, as well as community art builds and outdoor theater productions.

Unicorn Riot journalists create articles that focus on key issues such as money laundering, the expanding threat from climate change, to the growing trend of Islamophobia, revolutionary history and militarization of police. We also showcase articles tied to particular events we’re covering through livestream, short-form documentaries, investigative journalism or podcasts.

Our interview-style podcasts featuring the Solecast and others, bore deep into the core of various issues, such as: labor/work, privilege, counter-information, gentrification, hip-hop, art, culture, nature, surveillance, international issues, decolonization and more!

We currently have ongoing investigations into an assortment of topics, including policing of social movements in cities throughout the United States.

So far, based on open records investigations in Denver, we have: exposed a racist chain email sent by a Denver public transit manager, obtained a redacted copy of the Denver Police Crowd Control Manual (which then inspired an anonymous source to leak us an unredacted copy), shown how Denver Mayor Hancock’s staff monitored media coverage of Michael Marshall’s death in the Denver jail, provided a detailed examination of Denver Police using powerful social network analysis software for surveillance, as well as published the Internal Affairs record of Denver Police Technician Jeff Motz, who shot & killed Dion Avila Damon earlier this month. We also have additional stories in progress based on even more open records requests.

Burdensome fees are often demanded by officials before they will produce public records, and paying fees for records requests takes up a noteworthy portion of our budget. In the future, we are willing to fund possible litigation in order to challenge records being illegally withheld from us in the course of our reporting.

Unicorn Riot provides commercial-free live video streams, which are accessible to viewers on our website for free. We broadcast a variety of live events, from community art events to social and environmental justice issues. Our video streams normally last hours and some have even provided viewers with a window into a live event for as long as 18 consecutive days. In the past we have also had multiple streamers providing video of one event at the same time; other times we have had multiple streamers in separate cities simultaneously providing streams of events in their local area.

It takes multiple people to make one stream possible. We have volunteer videographers, hosts, studio personnel, as well as social media teams all working together to bring viewers live-unfolding events, a tricky media-medium which is constantly subject to surprises and changes of plans. The services and programs associated with our ability to stream in this manner account for a large portion of our operation costs. We persist despite the stress, incurred both personally and financially, because we believe this newer form of media is crucial to the mission of the Unicorn Riot collective: to contribute coverage which conveys events and situations as they are, in hope of bringing greater understanding of social struggles today. If you don’t see an amount you want to donate per month, you can write in any amount and click “Make This Recurring (Monthly)” on the one-time donation button below. Upon checkout, please include your t-shirt size and mailing address, if applicable, in the comments section.

Use the following PayPal “Donate” link to make a one-time donation of any amount.
In order to receive a gift, please provide your mailing address and t-shirt size when prompted through PayPal.

Please make checks payable to Unicorn Riot. Include your email and t-shirt size if applicable.

Your support will help solidify a grounded foundation going into our second year as a media organization with the voice of the people at heart. Financial support will go toward keeping our primary content-distribution platforms up and running and toward supplying our media teams with the specific equipment needed to sustain and expand our creative abilities. Your support will allow Unicorn Riot to continue to cover stories dealing with social and environmental struggles. Every penny contributed goes directly into creating and sustaining our communication, production and distribution infrastructure.

We will also utilize your support towards upgrading our live studio hardware and software and expanding our cloud-based collaborative communications platforms. The equipment we use at Unicorn Riot is an essential part to producing media. Utilizing cutting edge technology is crucial to making our productions successful (yet would still not be possible without a few spliced cables and duct tape). Whether it’s recording video interviews in subzero temperatures, or tweeting pictures from the top of a dusty desert plateau, our volunteer reporters are often covering stories in remote locations where we face a gauntlet of technological hurdles, in the midst of harsh weather, far from your nearest wall socket.

With your support, our goal of $6,000 can be met. This will help us acquire vital new equipment such as mobile network devices, video cameras, live video encoders, microphones, portable battery blocks, cables, lights, SD cards and computer parts. Funds raised above $6,000, but below $12,000, will allow Unicorn Riot to expand our ability to cover stories. Funds raised above $12,000 will vastly expand our opportunities to cover stories, grow our organization and further develop our cutting edge non-profit independent media platform.

We decided to host our fund raiser independent of large crowd-sourcing platforms because we want to apply expanded creative control over the presentation of our fundraiser and also to minimize or bypass forfeiting a percentage of funds raised to third-party platforms.

Thanks for your support!

One Year Later: A Cop’s Eye View of Protest Repression in Denver 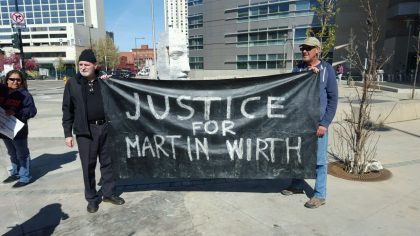