Minneapolis, MN – On January 29th, hundreds of Minneapolis residents came together at Brian Coyle Community Center in the Cedar Riverside Neighborhood of Minneapolis. One of the speakers at the night’s event would refer to Brian Coyle as “the heart and home of the Minneapolis Somali community“.

The community meeting was called by Minneapolis Rep. Ilhan Omar, the first Somali-American legislator in the United States. Ilhan represents District 60B, which includes the Cedar-Riverside neighborhood, the city’s most diverse community. She called the meeting in response to President Trump’s executive order, which targeted more than a hundred million people from Muslim-majority countries with a travel ban.

The event, which was first scheduled for Omar’s office, was slated as

As interest in the event on Facebook escalated it was moved to the community center, where over two thousand people said they planned to attend. The event featured speakers from the local Somali, Muslim, and Black communities followed by allies from the various faith communities in the area. Chants like “Black Muslims Matter“, and “If we don’t get no justice, they don’t get no peace“, opened the event followed by a prayer. Unicorn Riot livestreamed the meeting.

Representative Omar set the stage for the community meeting by saying,

“We’re gathered here in response to the anti-Muslim xenophobic racist policies the [Trump] Administration has put out on Friday.“

Those in attendance repeatedly cheered and applauded as speakers spoke of how to move forward together to resist the administration’s recent travel bans which targeted seven Muslim-majority countries: Syria, Iran, Iraq, Yemen, Sudan, Libya and Somalia.

The goals of the meeting were to to provide comfort, reassurance and to educate those most impacted by these policies. The speakers introduced, as being there to help people know their rights, and help people know they had each others’ backs, to have experts explain what the rulings mean, and to pull resources together.

“In #Minneapolis…this is going to be the ❤️& home of the #BlackMuslimResistance in this country, so join us” #LIVE https://t.co/zcDC9sOoZx pic.twitter.com/pbDZsPDonp

The above speakers reminded folks about resistance, and spoke about a locally executed federal program called “Countering Violent Extremism (CVE),” which asks counselors, teachers, government agencies, school services, and anything that provides services to young people, to essentially surveil them. The speakers said the program was based on a controversial British program called “Prevent”.

The two speakers stated that programs like these fuel Islamophobia and are tools of hate in the United States. They said they watched for years as their communities have been surveilled to an inch of their lives. One stated, “Being a good liberal progressive will not save black and brown bodies“. They stated they watched as their countries were droned and bombed and families killed as their Minneapolis neighbors stayed silent, and they reminded folks that the resistance continues after this meeting.

Many of the speakers have talked about the FBI’s #CVE program they say increases #Islamophobia – #LIVE https://t.co/zcDC9sOoZx #NoMuslimBan pic.twitter.com/fxN9q4sOO7

Many of the speakers wanted to make clear that Islamophobia has always existed and always needed to be resisted.

“We’re here to stand with our Black Muslim Families right now as they are under attack” – We’re #LIVE https://t.co/zcDC9sOoZx #NoBanNoWall pic.twitter.com/QCByThMMXR

Members of the local NAACP chapters let the Somali community know that when they’re called for, they’ll show up, and acknowledged the Indigenous land that they were on. They also took the time to give a nod to the Black Liberation Project and the Young Muslim Collective‘s work, who they said created the movement people were seeing today in Minneapolis.

John Keller, E.D. of @ILCM_MN, speaks about the new bans that Trump has put forth – Watch #LIVE https://t.co/zcDC9sOoZx #NoBanNoWall pic.twitter.com/XwYnRGhLyO

John Keller, Executive Director of the Immigrant Law Center of Minnesota, talked about using the law to fight back against the President’s order. Keller explained the law resources available to people being affected by the ban and the lawyers available for help.

“I’ve been told so many times to go back to where I came from but this is my home” – Watch #LIVE from #Minneapolis https://t.co/zcDC9sOoZx pic.twitter.com/4C6ByQQ1xl

The biggest applause came when a St. Paul resident of Iraqi descent ended her section with by saying, “I just want to say, that you can’t let people tell you to go back to your country–when they still haven’t gotten out of yours“. The crowd responded with standing ovations.

At end of the community event speakers advised folks of upcoming protests & rallies coming up in the St. Paul/Minnesota area. One January 31st protest has 5,300 people saying they’re “going” at the time of this publication.

The crowd exited Brian Coyle community center chanting “I believe that we will win“. 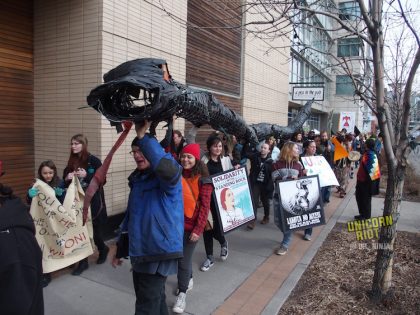