Denver, CO – On January 28th, 2017 Denver joined the day of Global Prayer Actions “to carry the prayer from Standing Rock to the steps of Banks around the World funding harmful Oil Extraction.”

The day of action was initiated by Unify, United We Rise, and indigenous leaders at Standing Rock with the intent for people to organize global actions outside of banks which fund the Dakota Access Pipeline and to encourage people to close their accounts at these banks.

The action in Denver was organized by indigenous femmes in the community and was at two locations–one group was downtown on the 16th Street Mall and the other was in the Cherry Creek Shopping Center.

We were able to live stream the group in Cherry Creek where they walked through the busy outdoor shopping center carrying a twenty-five-foot long black snake as well as dozens of signs. The crowd of at least seventy-five people walked to five banks and stopped outside each one to chant, cheer, pray and sing songs.

While the majority of the crowd remained outside, some people went inside to close their accounts, to speak with people inside the banks, and to pray and/or sing inside.

A significant aspect of yesterday’s global action was prayer, which has also been an imperative part of the resistance for the water protectors at Standing Rock. According to the Global Prayer Action website:

We will continue to stand, to pray and to meditate to elevate the consciousness of the financial institutions, governments and corporations funding oil extraction around the world by asking that they make the choice to invest in clean renewable energy, the future of our planet, and protect the rights of all people.

We are ready to FLOOD THE BANKS with our PRAYERS to show the world that UNITED WE RISE.

Indigenous Youth have led the Standing Rock movement, carried the prayer for our water and have organized actions around the country to defund DAPL. In solidarity we are organizing a global prayer action that will be broadcast live from Standing Rock as we take this prayer to the steps of the Banks around the world.”

At 12pm central time, a thirty-minute prayer with multiple speakers was broadcast live from Standing Rock, and the group in Cherry Creek amplified it through a speaker system outside one of the banks.

Here is a video from the action in Denver on the 16th Street Mall shared with us by the Colorado American Indian Movement:

Food & Water Watch also point out the future investments that banks have already committed to:

Follow our media on Twitter, Facebook, and our website for more information surrounding ongoing social and environmental struggles. To see the archives of our previous #NoDAPL coverage, click here and view our previous round-up article about eco-defense actions from November 2016: Land Defense & Water Protection Actions Ripple Across Turtle Island. 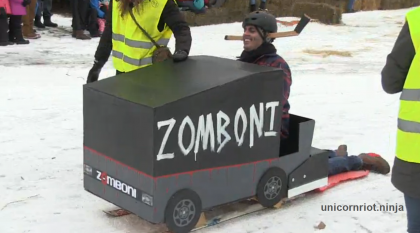