Unicorn Riot was live on the scene for the rally and march:

This convergence comes two days after a packed-house at a community meeting in the Cedar-Riverside neighborhood. The meeting ended with calls for people to join in the multiple actions. Already hundreds had protested at the local airport, and the #MuslimBan march on January 31 was another of the actions announced to protest Trump’s executive orders.

We are #LIVE in #Minneapolis, where thousands have gathered to #ResistTrump & march against the #MuslimBan https://t.co/zcDC9sOoZx pic.twitter.com/w9HroquYWa

When we first arrived at the rally location, the mall of the Federal Building, local communities leaders spoke in opposition to Trump’s anti-immigrant agenda and the need to support Muslim communities in Minneapolis. The crowd chanted “No Ban, No Wall, Sanctuary for All“, filling the space between City Hall and the Federal Building with shouts of resistance.

Crowd chants “No ban! No wall! Sanctuary for all!” at #TwinCities #MuslimBanprotest #NoBanNoWall

When the march left we heard reports of five thousand people, while others swore the crowd had been much larger.

Unicorn Riot ended our coverage of the march with a series of interviews with local Muslim community members and supporters. They shared with Unicorn Riot their happiness at so many non-Muslim people coming to stand with them; one stated it’s the first time they heard non-Muslims in the United States say they loved Muslim people. Others said that it was important that other Muslim countries see what happened here, that there are people in the United States who support Muslims.

“You’re sending a very powerful message to 1.8 billion Muslims: that we love you, that we care about you, that we will work with you for liberty, for justice, for freedom and for democracy. This message is very important for the Muslim world, and I’m so happy that I’m here today.” – anonymous attendee

At the time of this publication Donald Trump has begun efforts to rename a program called “Countering Violent Extremism” (CVE) to “Countering Radical Islamic Extremism” focusing the program solely on Muslim communities. Unicorn Riot has learned the Muslim community feels as though programs like CVE fuel Islamophobia; read our November 2016 report from the CVE forum hosted by the Twin Cities Young Muslim Collective. 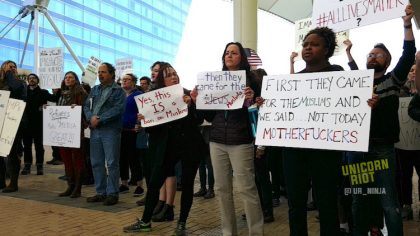 Crowds of Attorneys and Protesters Converge at Airports Across U.S. to Oppose #MuslimBan