St. Paul, MN – After over five days of deliberations a Ramsey County jury has reached a verdict in the trial of St. Anthony police officer Jeronimo Yanez. Officer Yanez was charged on November 16, 2016 after he killed 32-year-old African-American Philando Castile by shooting him five times during a traffic stop in Falcon Heights, MN on July 6, 2016.

Yanez, who is Mexican-American, was tried in front of a mostly white jury, who eventually found him not guilty on all counts. The city of St. Anthony announced in a statement made shortly after the verdict that Yanez will not continue as an officer in their police department.

A verdict had been expected on both Wednesday and Thursday but the jury appeared to be deadlocked for quite some time. Each member of the twelve person jury has to agree on charges to reach a verdict.

Watch here for our live video coverage of the aftermath of the verdict:

Philando Castile’s mother made a heartfelt statement denouncing the verdict on Facebook live.

They murdered my motherfucking son with his seat belt on.  So what does that say to you? Now they got free reign to keep killing us any kind of way they want to.  So i just want to say one thing to everybody out there, I don’t give a fuck what you do.  Do what your heart desires… Fuck the police!  -Valerie Castile

Memorials to Philando Castile were made after the verdict announcement at the site of his killing by Yanez, on the side of Larpenteur Avenue. A protest against the verdict was scheduled for 7 PM central time at the state capitol in St. Paul.

Around 6:30 PM protesters started showing up. The crowd quickly swelled to hundreds of people.

People are amassing at the Capitol in response to Yanez not guilty verdict – #PhilandoCastile – #LIVE https://t.co/9yiRl2QgyZ pic.twitter.com/Sem9UPUVGP

Near the protest at the capitol, the Minnesota State Patrol had deployed an armored vehicle with their Special Response Team. They later relocated the armored vehicle to inside a nearby parking garage. A new state patrol plane was also observed flying in circles over St. Paul in the immediate aftermath of the verdict, as protests began to get underway.

The crowd of thousands began marching down University Avenue after rallying and listening to the speakers at the capitol. After marching for about an hour, the crowd made its way to I-94, echoing past highway shutdowns responding to police shootings in the Twin Cities.

Around 11 PM police started to appear on the interstate. About ten minutes later, they used an LRAD (‘long range acoustic device’ – a sonic weapon which can damage hearing) to declare the march an unlawful assembly and order the crowds to disperse. Many believe that this was the first use of the LRAD in Minnesota’s history.

After several dispersal orders, police lines began to gradually herd the crowds to the side of the highway. A small group of protesters was surrounded by police in riot gear while leaving the freeway, and were arrested in a pretty rough fashion.

As of 1 AM the crowd had generally dispersed. 18 arrests have been reported. At least four were minors. Some reporters began publishing personal details of those arrested, including four children, after being given the minor’s names by law enforcement (this is illegal). The information was taken down after people pointed out the reporters were endangering children. It is unknown which law enforcement agency released the children’s names to the public in violation of the law.

Among those arrested were two journalists – Susan Du of City Pages and David Clarey with MN Daily News. These arrests appear to violate the terms of a legal settlement the city of St. Paul reached with journalist Amy Goodman after she was arrested reporting from protests outside the 2008 Republican National Convention. In the settlement, police agreed to respect the rights of journalists to report at protests.

Both reporters were released the next day and charged with unlawful assembly and public nuisance. Media equipment belonging to City Pages reporter Susan Du was seized by the Minnesota State Patrol and was not given to her upon her release.

As of 1:30 AM several dozen protesters were gathered outside the Governor’s Mansion. "The chants & all that, that got us nowhere" – #PhilandoCastile's fam spoke as people closed out gathering at Gov mansion & then SPPD came pic.twitter.com/YsG8Cdu6sC

Chao Xiong with the Star Tribune reported that state authorities are refusing to release dash cam video showing the shooting until a later date.

We spoke with Pastor Danny Givens Jr. the other day about his interpretations of the Yanez trial. He spoke about Yanez’s admitted implicit bias towards Black folks, the trial proceedings, the Castile family, and the abolition of the police. See his interview below: 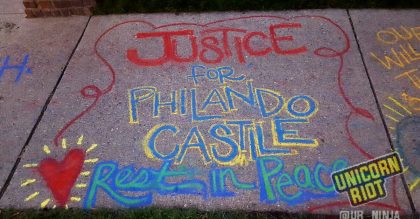