Minneapolis, MN – Around 50 people marched through Uptown Minneapolis during a mobile dance party on election night, November 3. The crowd played music, shot fireworks, spray-painted political statements onto boarded-up business fronts and erected roving barricades in the streets. After the first loop through uptown, dozens of police cars followed the march, eventually surrounding it and arresting 14 people.

The dancing community members, who chose not to organize the party on social media, said they were there irrespective of who won the election; they were spotlighting that they’d learned they could “only rely on each other.” They said they were celebrating the community and power they had been building up during this past year.

Responding police forces followed the dance party for blocks until it reached Bryant Square Park. Before people had the chance to disperse, the police made tactical moves to kettle the march. Many people escaped the kettle but several were violently tackled and arrested by the police.

When the police started to get out of their cars, they ran through the park yelling at everybody “get the fuck on the ground!” No dispersal order was given, nor were any commands given, despite mainstream outlets reporting that protesters disobeyed police orders.

As police were making arrests, community members from the neighborhood gathered at the corners of 32nd Street and Aldrich, and also at 31st Street and Bryant. Many yelled and chanted at the police until they left the area.

Actions of the police on November 3 are a continuation of their responses towards certain protests and gatherings since late August 2020. After a summer of discontent and a historical uprising that left the Third Precinct charred and abandoned, police tactics have become more aggressive and violent.

Those arrested were jailed on probable cause riot charges. All 14 were released, with one person having been charged with fourth-degree assault and obstructing the legal process. The rest have not been cited with any charges as of yet. 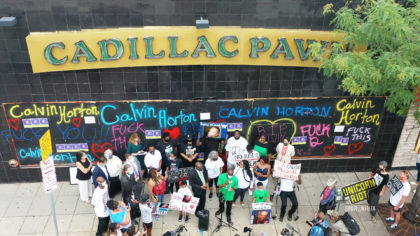 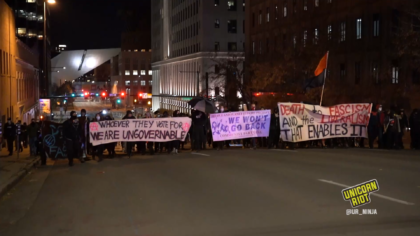 Denver Protesters Call for “Everybody Out!”