Aurora, CO — On Saturday evening during the rally and march for justice for Elijah McClain and in solidarity with Portland, a teal Jeep drove through the massive crowd on the northbound side of Interstate 225. The Jeep narrowly missed fleeing protesters, causing one person to jump over the side of the highway breaking their ankle, exited on the E. 6th Avenue ramp, then drove up to Aurora Police Department (APD) officers where the driver and his passenger, both white males, had a friendly police interaction.

Aurora police briefly questioned the two, and before towing the Jeep to impound for “evidentiary purposes,” allowed the men to retrieve their items out of the vehicle. Officers ended up driving the two home unscathed.

As of the publishing of this article, neither the driver nor the passenger have been charged with any crimes, yet, someone else has been charged.

A protester who had a firearm and who saw the Jeep speeding down the highway toward hundreds of people, fired at the vehicle, seemingly to try and stop it from causing harm or death. The protester did hit the Jeep, but also hit a fellow protester in the leg, and grazed another’s head. Both were taken to the hospital with non-life threatening injuries.

The Aurora PD posted two pictures of the shooting suspect they received from a witness on their blog and twitter asking the public to help identify the young white male. Police identified and soon arrested the suspect on Monday night charging him with four counts of attempted homicide.

Charging the protester with attempted murder means that APD believes he intentionally tried to murder two fellow protesters and the driver and passenger of the Jeep, with premeditation. However, if the Jeep had not sped through the crowd, the protester would not have fired his weapon, and therefore, this instance does not add up to attempted murder; it much more closely resembles self-defense.

In Colorado, self-defense law has three revised statutes, where Section 18-1-704 states “a person is justified in using physical force upon another person in order to defend himself or a third person from what he reasonably believes to be the use or imminent use of unlawful physical force by that other person, and he may use a degree of force which he reasonably believes to be necessary for that purpose.”

The law goes onto say that “deadly physical force may be used only if a person reasonably believes a lesser degree of force is inadequate and the actor has reasonable ground to believe, and does believe, that he or another person is in imminent danger of being killed or of receiving great bodily injury.”

As the Jeep began accelerating on I-225, Sebastian Sassi, who was in his white Ford F-150 parked at the back of the crowd, acted fast and positioned his car in such a way that caused the Jeep to crash into his vehicle slowing it down significantly. He spoke at a press conference Monday evening about the Jeep attack:

Let’s think about this guy, he was able to hit my vehicle, hit a jersey barrier, almost hit a bunch of people, flee the scene of an accident, run away, and then he was allowed to go about his business. Elijah McClain wasn’t even allowed to walk home from the convenience store.”

Candice Bailey, co-founder of Frontline Party for Revolutionary Action (FPRA), which was one of the hosts of Saturday’s event, also spoke at the press conference Monday evening:

“What was orchestrated on Saturday, and I do mean orchestrated, there are eyewitness accounts that watched this vehicle enter when the police had supposedly barricaded the entrances, there is not a question, who barricaded is who let someone in.”

Bailey went on to say how her and her comrades have pictures of the driver smiling as he sped down the highway.

The Aurora Police Department allowed the Jeep to come into us and attempt to murder us.”

A local media organization Amplify the Voice compiled footage of the Jeep speeding down I-225, which you can watch below. [Content advisory: Car attack, car crash, gunshots]

After the Jeep left the highway, and the gunshots had been over for several minutes, organizers of the event instructed everyone to safely exit the highway. Some protesters were climbing over the brick wall highway perimeter, while the majority traveled on the off-ramp.

The crowd, which still had close to 1,000 people, tightened up and marched through the streets back to the Aurora Police Department Headquarters where the rally began earlier that evening.

Hundreds then left after the organizers decided it was time to end the event, but still about 200 protesters remained. As darkness cloaked the protesters, they grabbed hold of the new metal fence in front of the headquarters’ courtyard, and began rocking it forcefully back-and-forth until a section of it bent to the ground.

Riot police entered the courtyard that the fence had once protected, and that is when protesters set fireworks off into the courtyard.

Plywood protecting the glass municipal courthouse windows was torn down and the windows smashed. A small fire was started right inside one of the broken windows, but was put out quickly.

At some point at least one dispersal order was given over a megaphone, yet the protesters remained unfazed using the courthouse window plywood as shields and holding down a line on the grass outside the damaged fence.

After about an hour, the protesters decided to march down East Alameda Avenue and then ended up dispersing.

Aurora’s Mayor Mike Coffman called these protesters who stayed behind “domestic terrorists” in a tweet, which has been deleted. However someone took a screenshot:

Aurora Mayor Mike Coffman this morning: “I understand that our police department chose to show restraint last night by not using nonlethal munitions but now that these terrorists smell weakness, my concern is that they will be back again and again until they achieve their goal.” pic.twitter.com/PJHNPRu0gK

The restraint that APD displayed may be because of the class-action lawsuit filed last week against them for excessive use of force at previous protests on June 27 for Elijah McClain. On that day there were three different planned protests outside the municipal center, one of which Unicorn Riot covered, but it wasn’t until the evening violin tribute where police used less-than-lethal weapons.

On August 23, it will be the first anniversary of Elijah McClain’s death. The police officers who aggressively approached him last year certainly did not display restraint of force. McClain lost his life because someone thought McClain looked suspicious and called 9-1-1, and therefore the officers arrived on the scene viewing him as criminal before listening to what he had to say, and when McClain did speak, they didn’t listen. (McClain’s fatal encounter was documented in the body-worn camera footage from that night. Content advisory: police brutality, violence)

On the opposite end of the spectrum, the white male driver of the Jeep that drove into a crowd of people was treated as innocent before, during, and after police listened to his statement. He is still alive and free. 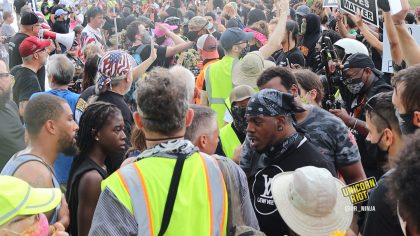 March for Justice Challenges Back the Blue in Minneapolis Suburb 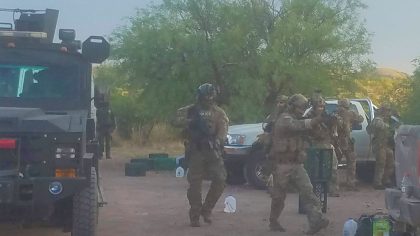