Bloomington, MN – Small shoving matches broke out as hundreds on a ‘March for Justice’ demo walked past a ‘Back the Blue’ rally at Bloomington’s Civic Center on July 25. Some pushed, some swore, some threatened, and others watched small groups of people on both sides speak to and hug each other.

The following video features some moments from the humid Saturday afternoon where a heavy downpour lifted moments before the two sides met.

The March for Justice was organized by a slew of groups and began at Bloomington’s Kennedy High School. Demands included reform and accountability for the Bloomington police along with “BIPOC representation in the Bloomington Public School district”.

The Back the Blue rally sought to “celebrate safe communities and the LEOs [law enforcement officers] who risk their lives to protect” people and was organized by the Bloomington Patriots, a “government watchdog group“.

The two groups crossed paths on 98th Street as the march was moving west.

Riders from Bikers Riding Against Police Brutality (BRAPB), who led the march with front-end traffic control, raised their fists and revved their engine after they stopped near the Civic Center. About a hundred people from the Back the Blue rally had moved to the corner as the march arrived.

Men from the Back the Blue rally crossed the street to physically confront a participant in the march; further confrontations ensued from there. Beyond a few shoving matches, no one was reported to be injured and no arrests were made.

The Back the Blue participants who spoke with Unicorn Riot expressed a wide range of viewpoints. One participant asserted that he was “scared” for the safety of his brother, who is a cop. He said that Barack Obama himself had revived racism, that “racism was dead” before Obama became president, and that Obama was responsible for the “war on cops.” Yet, Obama actually signed the Blue Lives Matter Act in 2016.

Another group of participants claimed strongly to believe that Derek Chauvin and the other ex-police officers that took part in the murder of George Floyd were paid actors.

Last month, Bikers for Trump held a Back the Blue rally outside of the Governors Residence in Saint Paul, drawing a couple dozen participants and a few hundred counter-demonstrators. See video below for scenes from that event.

A few of the same participants who attended both of the recent Back the Blue rallies have also participated in protests demanding states re-open for business as usual amidst the coronavirus pandemic, such as April’s ‘Liberate Minnesota‘ event outside of the Governor’s residence.

Actions where participants from opposing viewpoints merge to interact are becoming more commonplace as summer progresses. Many on both sides of the Back the Blue rallies have been seeking middle ground through dialogue.

One of the men holding an assault rifle and acting as security for the Back the Blue rally said after the event that “it actually went pretty well. They exercised their rights—I mean, it gets loud, but—and then I exercised my rights. And that’s what it’s all about“.

After the opposing sides finished their brief pushing matches, a participant in the March for Justice said to Unicorn Riot that, “positive communication and educating each other is one of the only peaceful ways forward at this point.” 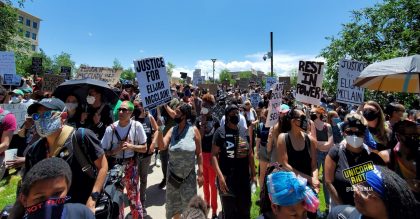 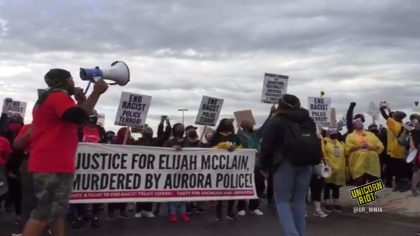 Jeep Drives Through Protesters on I-225 in Aurora, No Charges Filed