“George Floyd could’ve been me.”

As covered throughout this series, Target created the SafeZone/Safe City program in 2004 as a massive surveillance dragnet to aid local authorities in hard-line police enforcement, particularly against Black youth and homeless populations.

For years, through the Target Foundation, the multinational retailer sponsored police departments around the country; providing services like access to its state of the art forensics labs and police training on how to confront panhandlers, to donations of high-tech surveillance equipment like mobile command posts, and enhanced cell phone tracking systems. It also paid for data mining software by Palantir Technologies Inc., a spy tech startup that got seed investment from the CIA’s venture capital wing, In-Q-Tel.

All of this and more has been going on for decades, yet it is hardly known to the general public due to the gap in corporate media coverage.

However, after the murder of Floyd, some activists set their sights on Target. As mentioned in Part 4 of this series — Targeted: Young, Black, and Harassed in Downtown Minneapolis — a group of police abolitionists called Concerned Shipt Shoppers created a petition demanding Target cease all funding to law enforcement.

They accused the retailer of funding police through back channels, skating accountability: “Through its public safety grants program, Target donates to police foundations that acquire equipment for police departments through private funding channels, allowing them to bypass public oversight.”

According to petitioners, the corporation played an instrumental role in shaping brutal policing in Minneapolis that led to Floyd’s murder, and they’re calling for atonement:

“By providing funding and legitimacy to punitive policing strategies in Minneapolis and across the country, Target bears a unique responsibility for the circumstances that led to the death of George Floyd and countless other victims of police brutality.

To correct the corporation’s years of funding invasive surveillance and broken-windows style policing, Target should commit to providing funding – equal to that which it invested in cracking down on low-level offenders – to community based alternatives to policing, social services that help eliminate the need for police altogether, and wage increases that support the livelihoods of its own employees.”

Unicorn Riot was the first media outlet to provide critical coverage of Minneapolis’ repressive Downtown 100 Initiative (DT100) and connect its origins to Target’s SafeZone surveillance program. The DT100 is a list of the top “lifestyle” offenders who are tracked by a team of downtown professionals and police with the goals of geographically banishing them from the city’s center.

As covered in Part 4 of this series, Mickella Rolfes, a former case manager who worked closely with youth caught up in the DT100 surveillance program, organized an online forum in February 2021 featuring some former clients detailing their experiences with downtown police. Throughout the two hour discussion, forum organizers and panelists made connections between Jim Crow segregation, the harsh policing experienced by DT100 surveillees, and Floyd’s murder.

Irving and the other men who participated in the online discussion had created a film in 2015, telling their stories for the first time. The film, Reflections on the Downtown 100, received zero press at the time despite the jarring claims made by the youth featured in it.

One of them told a disturbing story of MPD threatening to kill him and his friends just for being downtown. “Four officers …walked up on us and said … they’ll ‘Trayvon Martin our little Black asses.’ Those his exact words.” The film did not mention Target’s involvement in co-creating the DT100 program.

Dr. Aren Aizura, assistant professor in race and gender studies at the University of Minnesota, has perhaps been the most articulate about why Target was “targeted” by demonstrators. He wrote last year during the uprising that “The focus on Target as a source of rage feels especially important.” He added that “it’s an appropriate outlet for rage” based on Target’s alliance with law enforcement that is bound to a “long and deadly imaginary of Black and brown people as naturally ungovernable, naturally oppositional, and only disciplinable through the ‘full force of the law’—that is,” he wrote, “the Law that equates civility with whiteness.”

Twin Cities based activist and socialist commentator Adnan Ahmed said Target used empty antiracist gestures, a “woke mural,” and Black dolls in efforts to “hide its role in violent racist policing.” In a piece he penned for Left Voice, a self described “militant” publication, about the history of the retail giant’s racism and their attempts to cover it up, Ahmed said, “Target left no stone unturned in trying to appear invested in the community.”

However, rather than divesting from policing and racialized surveillance like opponents have demanded, Target pledged $2 billion investments in Black businesses nationally. And instead, according to Ahmed, paid off community orgs. He accused a recent beneficiary in Minneapolis, Juxtaposition Art (JXTA), of apparently “covering up Target’s role in policing Black people” after receiving a $5 million “Hometown Racial Equity” grant from the Target Foundation.

JXTA, a non-profit youth-serving agency in the historically Black North Minneapolis, created the new mural outside of the newly remodeled Super Target after it was ransacked during the uprising in efforts to remake the store to appear welcoming to the Black community.

“Through these philanthropic ‘charitable contributions’ to nonprofits … Target can wield influence over how the money is spent while protecting itself from accusations of impropriety.“

He told listeners, “It’s not Bob Kroll’s police department,” referring to the former Minneapolis Police Federation head who was sued by fellow Black officers for being racist. “It’s Target’s police department,” he said, acknowledging the corporate giant’s astonishing influence while placing culpability on them for much of the city’s problems.

Major news outlets have failed to critically cover America’s retail darling despite activists calling out Target’s role in funding racialized surveillance and draconian policing resulting in the increasingly violent enforcement that murdered George Floyd. In spite of all this, Target went on to record $15 billion in sales last year.

If the stories of Black youths targeted by the DT100 surveillance program and programs like it across the U.S. were investigated rather than silenced by the press, Floyd and countless others may very well be alive today, advocates argue.

Other than the online petition which only generated a few thousand signatures, and protests previously mentioned in this series, there has been no major organizing efforts to hold Target accountable for the damage they’ve done.

GP Jacob believes that what happened to its store during the uprising is unmatched compared to the harm Target caused people. He mused, “If only all their stores could be looted and burned.”

About the author: Marjaan Sirdar is the host of the People Power Podcast and filmmaker of the upcoming documentary, Targeted: Young, Black, and Harassed in Downtown Minneapolis – Part 2

Cover art is an adaptation from Coworker.org by Marjaan Sirdar 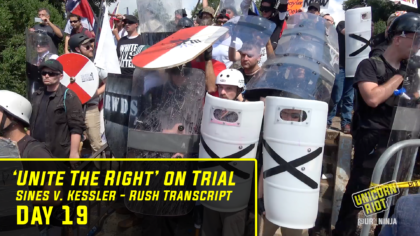 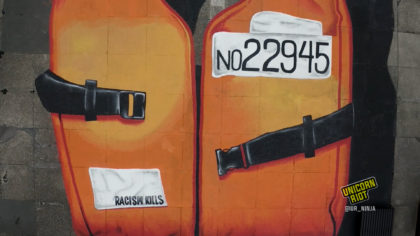 Life Vest Mural Draws Attention to the Plight of the Refugee